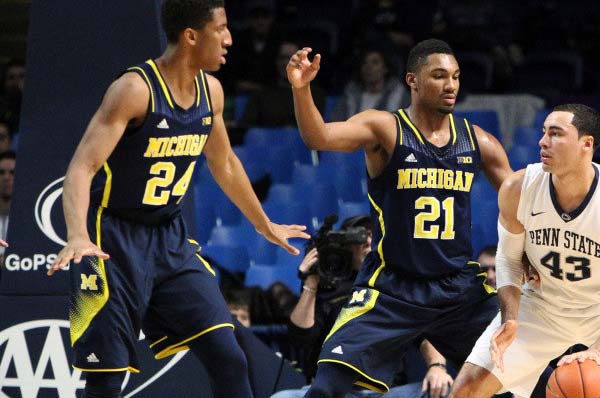 Michigan picked up a valuable road win at Penn State with its best shooting performance in weeks. The Wolverines let the Nittany Lions back into the game in the second half, but clutch performances from Caris LeVert, Zak Irvin and Derrick Walton were enough to seal the deal in Michigan’s best offensive performance of the season against a high-major opponent.

Penn State isn’t the best the Big Ten has to offer and the venue wasn’t the most intimidating – the upper-bowl was curtained off the end-zones were empty – but Michigan doesn’t have room to be choosy. The Wolverines need wins and they need them anyway they can get them.

Michigan led for most of the game, even by as many as 10 points in the second half, but it was never able to completely pull away. It felt inevitable that Penn State would eventually get back into the game and they did, tying things up at 53-53 with around eight minutes to play.

But Michigan answered. Immediately after Penn State tied the game, Derrick Walton was fouled on a three-pointer, making all three free throws, and the Wolverines never gave their lead back. Caris LeVert took over in crunch time – scoring six straight points – while Zak Irvin finished the deal with a dagger of a mid-range jumper to extend Michigan’s lead to four and a breakaway slam dunk to push it to eight points with 40 seconds remaining.

Michigan has only shot better than this once this year (against Nicholls State) and the catalyst was the three-point shot. The Wolverines were 9-of-15 (60%) from long distance and  six different players hit at least one triple. While it was nice to see Michigan hit some shots, the offense was far from perfect. Michigan gave the ball away nearly once every four possessions and that number would have been worse were it not for all of the late free throw possessions. Michigan’s unforced turnovers were uncharacteristic and widespread as all five starters gave the ball away at least twice.

Overall, Michigan’s offense was as good as we’ve seen in a long time. The Wolverines’ 1.16 points per possession were its fourth best offensive output of the season — trailing only NJIT, Hillsdale and Nicholls State.

Defensively, I’d give Michigan a bit of a mixed grade. The Wolverines improved their defensive rebounding as the game wore on – Penn State rebounded only 20% of its misses in the second half after dominating the glass – and were creative with their defenses. Michigan played man-to-man and 2-3 zone throughout most of the first 30 minutes and held every Nittany Lion other than DJ Newbill and John Johnson to 33% shooting.

Michigan had one terrific 1-3-1 defensive possession with 7:26 to play, but then fell in love with the zone for the rest of the game despite surrendering 7 (easy) points in the next 4 defensive possessions. The gamble eventually paid off as DJ Newbill turned the ball over on back-to-back possessions in the final minute, but this game was won by Caris LeVert and Zak Irvin making big shots – not Michigan’s defense.

Beilein benched Kameron Chatman in favor of Spike Albrecht, but I loved that he gave his young players more time overall. Chatman only played six minutes, but Aubrey Dawkins earned a deserved 16 minutes off the bench and Muhammad Ali Abdur-Rahkman also produced in six minutes of time. I’d rather have three guys playing fewer minutes, but trying harder with less pressure trying to make a play. There will still be mistakes, but give everyone a chance and hope they can bring something positive, if not then move onto the next one.

Michigan is going to have to battle in every game this season. Sometimes it’ll be a battle to hold off an opponent and other times it’ll be a battle just to hang around in games. The Wolverines aren’t going to blow people out and the margin of error is thin, but this is the kind of game that Michigan is going to have to get used to. Next up? A much-needed home game against a Minnesota team that has had a rough start to Big Ten play.