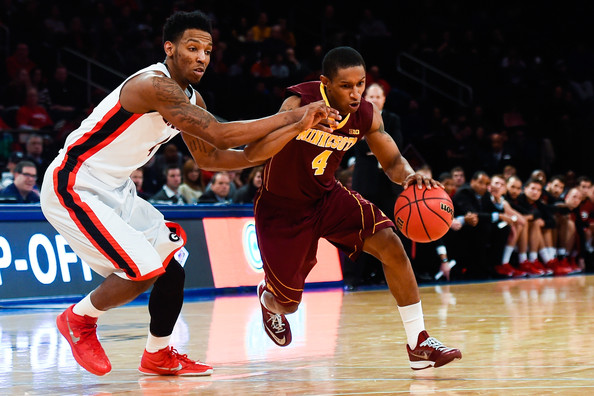 Michigan has won its last six games against Minnesota, dating back to 2011, but Saturday’s contest will put that streak at risk. The Gophers travel to Ann Arbor on the heels of three straight Big Ten losses — at Purdue, at Maryland and at home to Ohio State – and searching for positive momentum to turn their season around.

Michigan has won its last six games against Minnesota, dating back to 2011, but Saturday’s contest will put that streak at risk. The Gophers travel to Ann Arbor on the heels of three straight Big Ten losses — at Purdue, at Maryland and at home to Ohio State – and searching for positive momentum to turn their season around.

Michigan split its road trip and now sits at 2-1 in the conference, but still has work to do in order to dig itself out from the December hole that it fell into as it lost four straight. The Wolverines have a chance to build something with a home game at Minnesota followed by several winnable games — Northwestern, at Rutgers and Nebraska — remaining in January along with two more difficult games, at Ohio State and home against Wisconsin.

Beat Minnesota and a 6-3 record could be a possibility by the end of the month, lose at home to the Gophers and it’ll be a battle to stay at .500.

The winner of Saturday’s game will probably feel pretty good about itself, the loser will probably be looking upward in the Big Ten standings for a long time to come.

Minnesota’s style is a bit of an odd blend. The Gophers want to speed you up, but some of their players are still better in a halfcourt game.

The Gophers grade out as one of the most efficient, ISO, pick-and-roll, post-up and catch and shoot teams in the country according to Synergy Sports, but push the ball in transition more often than anyone in the Big Ten other than Ohio State.

The Gophers are a great shooting team — 52% on twos, 38% on threes for a 53 eFG% (34th nationally) — but aren’t ranked better than 100th in any of the other four factors. Minnesota gives the ball away on 19% of its offensive possessions and hasn’t excelled on the offensive glass (180th) or getting to the line (225th). An impressive 63% (22nd most in D1) of the Gophers’ made field goals are assisted as many of them come in transition, cuts to the basket or catch-and-shoot opportunities.

I’ve yet to be convinced that Richard Pitino’s defense can be successful long-term in the Big Ten. It’s clear that Pitino wants to do: play a fast game and force turnovers with his various trapping schemes. For the season, Minnesota is ranked 16th in tempo, 70 possessions per game, and 3rd in forced turnover percentage, 27%.

Through three Big Ten games, those numbers have dropped to 66 possessions per game and 22% forced turnover rate. There aren’t many turnover-prone teams in the conference, especially in the upper-half of the league, which led to Minnesota having the league’s worst defense last year. This year, while facing an admittedly difficult early schedule, the Gophers have given up 1.05 points per trip through three league games, third worst in the conference to date.

The Gophers are ranked 154 in eFG% allowed (48.2%) allowing opponents to shoot 46.4% on twos and 34.4% on threes and they aren’t any better on the defensive glass, where they surrender a 33% offensive rebounding rate (252nd nationally). Fouling has been an issue for Pitino’s group, as they’ve given up 39 free throws per 100 field goal attempts (205th). In four of their five losses, the Gophers have given up a free throw rate over 50%.

We’ve discussed Deandre Mathieu, Minnesota’s ‘little big man’ who stands just 5-foot-9, but does the majority of his work in the mid-range and at the basket, in the past and he’s having a solid senior season. Mathieu leads the Gophers in assist rate and is shooting 50% on twos and 47% on threes (just 15% of his shots are from long range).

Andre Hollins has been around for a while now and the 6-foot-2 guard’s best season was still his sophomore season under Tubby Smith. He’s shooting the ball better this season — 45% on twos, 40% on threes — but he’s turning the ball over on 20% of his offensive possessions.

Morris starts on the wing and shoots 48% on twos and 33% on threes. He’s the least efficient half court player among Minnesota’s backcourt rotation, but he’s the most productive in the transition game. Mason is an impressive pickpocket, one of four Gophers with a steal rate in the top-100 nationally, and also shoots 45% on twos and 42% on threes. He’s not much of a setup man yet, but he keeps his turnovers down and makes plays off the bench at the guard spot.

6-foot-10 big man Maurice Walker weighed in at 250 pounds this year and the senior is one of the most efficient post-up players in the conference. Walker scores 1.19 points per post-up possession, good for the 95th percentile nationally according to Synergy Sports, and he averages 4.5 post-ups per contest.

Walker is Minnesota’s best rebounder on both ends of the floor, a top-100 shot blocker and even has a Mitch McGary-ian steal rate ranked in the top-100 nationally.

Walker’s numbers would be impressive if it weren’t for Joey King, a Minnesota’s starting four man at 6-foot-9, who grades out in the 99th percentile nationally in post-up efficiency. King only gets one or two post-ups per game, but he scores 1.4 points per post-up and shoots 73% when he gets the ball on the block. If I’m Richard Pitino, I’m throwing the ball to King until Michigan proves it can stop him with Kam Chatman or Zak Irvin.

Reserve big man Elliott Eliason is shooting 69% on twos, but he’s not a post-up threat like Walker. Eliason is a plus-rebounder on both ends, but the majority of his offense comes on put backs, cuts and dump off passes.

With Minnesota’s home loss to Ohio State and Michigan’s win at Penn State, the Wolverines are now favored to beat the Gophers, 67-66, by Ken Pomeroy. But the game is, for all intents and purposes, a toss-up with a 51-49% probability split.