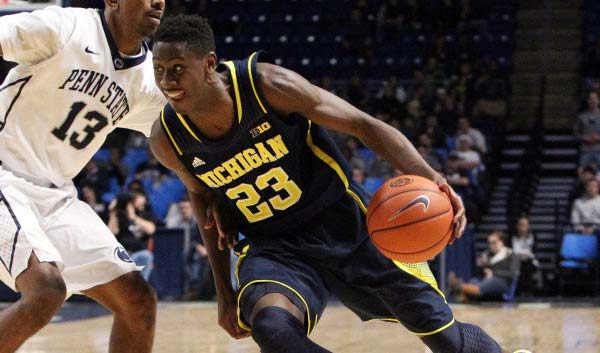 Sometimes, John Beilein thinks his team is a bit too cordial. Whereas Michigan basketball teams in previous years occasionally displayed an edge and heightened intensity in close games, the coach agreed that’s a trait this season’s squad might still lack.

“That is a developing thing,” Beilein said. “We joke about that — about some of our players playing with tuxedos on. We’re always working in that direction.”

Sometimes, John Beilein thinks his team is a bit too cordial.

Whereas Michigan basketball teams in previous years occasionally displayed an edge and heightened intensity in close games, the coach agreed that’s a trait this season’s squad might still lack.

“That is a developing thing,” Beilein said. “We joke about that — about some of our players playing with tuxedos on. We’re always working in that direction.

Following the win against Penn State, Beilein said Caris LeVert and the Wolverines had gotten their “swag back.” And it was apparent during the game, too. During a stretch in the second half in which the junior guard scored six-straight points, he appeared to jaw at John Johnson after hitting a floater.

The “swag” outburst was much-needed production from LeVert, who had scored in double-digits only once in the previous five games. The junior finished with 18 points against the Nittany Lions, including 3-for-4 shooting in the second half.

“I got into a pretty good rhythm, and we closed out the game well,” LeVert said.

The guard added that his right thumb, which had been injured earlier this season, is “pretty much 100% now.”

“It was definitely nagging me for a couple of games there,” he said.

While LeVert was jawing on the court, Beilein was equally impressed also by Zak Irvin, who fought for a loose ball after a missed three-pointer and helped keep possession with Michigan. The play, which occurred midway through the second half, eventually resulted in the first of consecutive made threes for Aubrey Dawkins.

“[Irvin] got the 50/50 ball that he never would have got a couple years ago,” Beilein said. “That was a huge play in the game. Zak, a month ago, would’ve been maybe looking at the shot and [saying], ‘Shucks, I missed it.’

“Those are the strides we’re making.”

On paper, Michigan’s biggest challenge tomorrow will be stopping the Gophers’ inside game — specifically,  center Maurice Walker and forward Joey King, who both rank in the top 5% in post-up efficiency, according to Synergy Sports.

The Wolverines will also see plenty of Elliott Eliason, the backup big man who is less of a post-up threat but nonetheless is a rebounding force around the rim.

“They’re loads,” Beilein said. “They’re great offensive rebounders. What’s really good, is they miss a shot, and they’re the best at getting their own shot back. That’s the big thing.”

Though it’s mid-January, Michigan is still trying to establish a reliable rotation. One of the changes Beilein expects to make over upcoming games is to reduce playing time for the starters.

“Some guys can play major minutes. Some guys’ bodies aren’t made for major minutes, and it may show at times,” Beilein said. “Trey Burke’s body was made for 40 minutes. It wouldn’t bother him. Other guys’ bodies, they may get beat up a little bit.

“We’re trying to scale down on starter minutes, and, at the same time, keep the young guys pressing forward to get better.”

The Wolverines got important contributions from the bench against Penn State. Dawkins scored eight points on 3-of-4 shooting in 16 minutes, while Kameron Chatman scored five points in six minutes and Muhammad-Ali Abdur-Rahkman added a three-pointer.

Michigan will need to lean on its younger players going forward as it tries to manage the grueling Big Ten schedule.