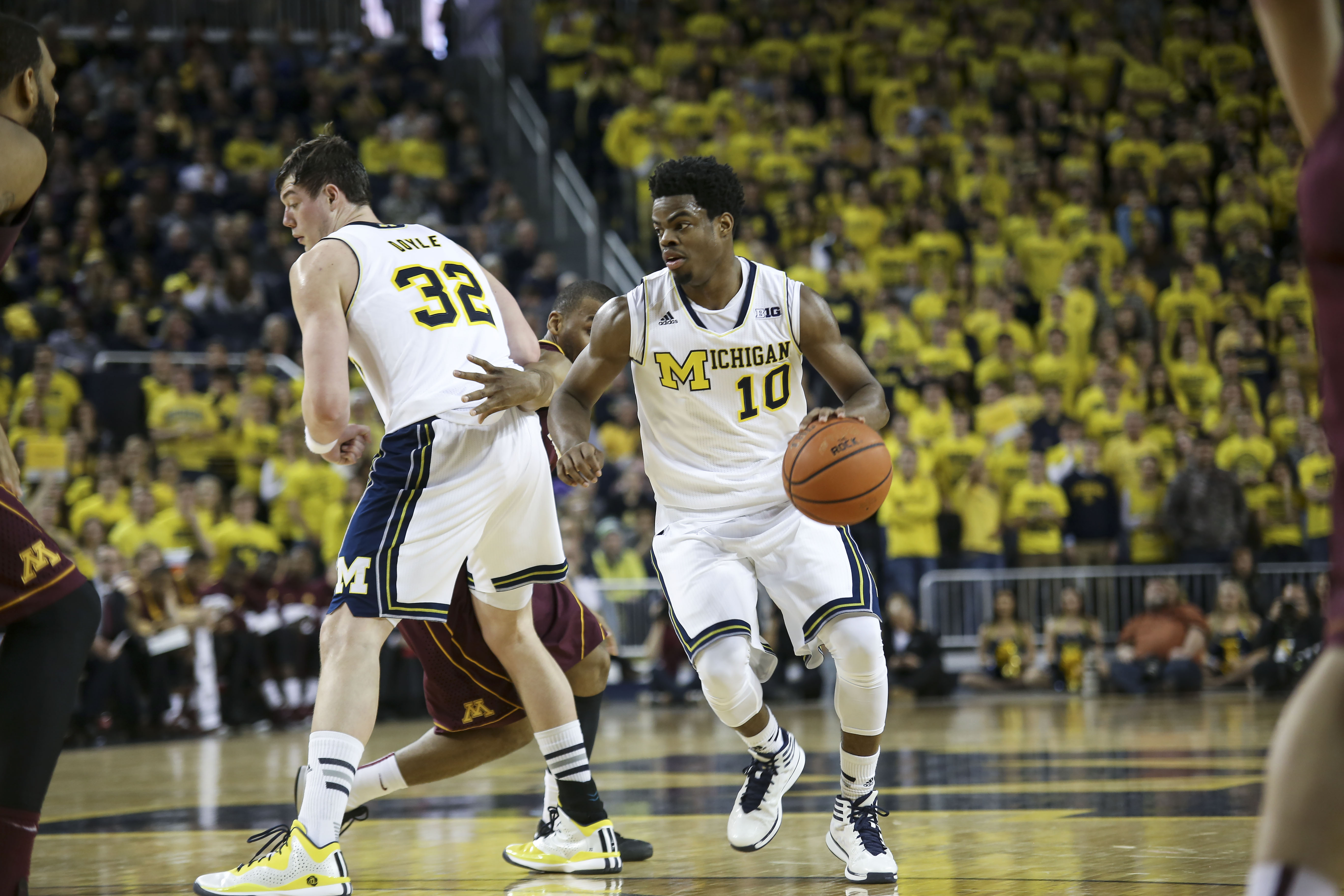 Whether it be lingering effects from his toe injury, growing pains as his role expanded or simply a lack of confidence, Derrick Walton just hadn’t looked like himself for much of this season. That seemed to change Saturday afternoon during Michigan’s 62-57 win over Minnesota. The sophomore guard dominated the second half with 13 points and finished the game with 15 — his highest scoring output since Dec. 6 against NJIT.

Whether it be lingering effects from his toe injury, growing pains as his role expanded or simply a lack of confidence, Derrick Walton just hadn’t looked like himself for much of this season.

Over the last two months, the 6-foot-1 sophomore has looked a shell of the player that we saw make game-winning plays in road games at Nebraska, Michigan State and Ohio State last season. He hasn’t been able to finish at the rim, has struggled with his perimeter jumper and has looked hesitant making most decisions.

That seemed to change Saturday afternoon during Michigan’s 62-57 win over Minnesota. The sophomore guard dominated the second half with 13 points and finished the game with 15 — his highest scoring output since Dec. 6 against NJIT.

“Derrick was playing the way we remember him playing,” said coach John Beilein.

But Walton’s most memorable play of the night wasn’t one of his three-pointers. Rather, it was his lob on the pick-and-roll to Ricky Doyle, who finished the alley-oop with a two-handed dunk to pad the Wolverines’ lead.

“We haven’t done it in a game or a practice yet where it was complete with a dunk,” Beilein said, “but we practice it a lot, like once a week. But we’ve never done it. That took a lot of courage to do that, and I’m so happy he did it.

“Make or miss, it was the right play.”

Coming out of a timeout, the play was designed through Walton, who would have several options with the ball. While the Wolverines prepared for the inbound, the guard warned Doyle to prepare for the lob.

“Right before we were going out on the court, D-Walt says, ‘Rick, look for the lob,’ ” Doyle said. “So I was expecting it as soon as he threw it up.”

Twenty-nine seconds later, Michigan closed out its victory, one made possible by Walton’s clutch shots throughout the night.

There was his three-pointer 10 minutes into the second half, helping keep the Wolverines close as the Gophers threatened to pull away. And when a switch to the 1-3-1 zone sparked a run, it was Walton’s trey that brought Michigan all the way back, giving it a 54-52 lead with 3:26 to play.

The guard went 4-for-7 from the field Saturday and 4-for-5 from the line, and he added five rebounds and three assists in 35 minutes. His three 3-pointers equaled a season-high from beyond the arc.

“I’m just starting to get my rhythm back,” Walton said.

After the game, Beilein admitted the sophomore still needs to improve on aggressively attacking the basket — a trait he has lacked since spraining his toe against Villanova in November.

“He’s got to turn his shoulders,” Beilein said. “He came to us as a pass-first guard, and, while we love that, if everyone is playing to pass, we’re not going to find anybody open. We want him to be more aggressive in shooting the ball.”

Walton said the season has been “an uphill battle” since injuring his toe. A month and a half later, the guard is “not 100% healthy, but he was healthier today,” according to Beilein.

But even as Walton and the Wolverines struggled at the end of the non-conference slate, the guard said “confidence is always there.”

And as Michigan delves deeper into the Big Ten season, a recovered and confident Walton can only serve it well.