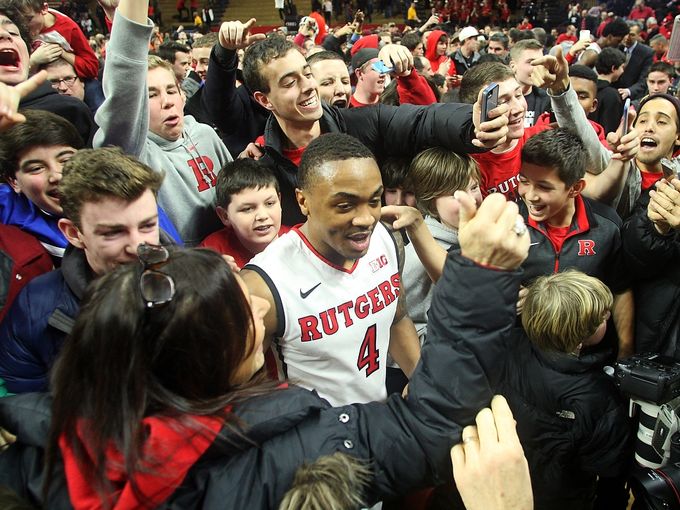 This week’s edition of Big Ten Power Rankings examines some of the best (and worst) off the dribble jump shooters in the Big Ten, Maryland freshman Melo Trimble’s ability to get to the free throw line and just what happened in Piscataway on Sunday evening. Wisconsin’s game at Rutgers was a small asterisk on the Sunday schedule for most Badger fans as all eyes were focused on the Green Bay Packers, who advanced to the NFC Championship, but the Scarlet Knights had other intentions.

The Badgers were without Player of the Year candidate Frank Kaminsky and lost Traevon Jackson midway through the second half, but their horrific second half defense was what cost them the game. Rutgers scored 1.63 points per possession in the second half after only managing to score .79 points per trip over its first three conference games.

The loss was bad, but the injury to Traevon Jackson might be the most troublesome news of the day. Jackson is the glue that holds Wisconsin’s talented frontcourt together. He’s the most efficient pick-and-roll scorer in the Big Ten (including passes) and he’s the guy that the Badgers count on to make plays down the stretch. A long-term injury to Jackson – who appeared to roll his ankle coming down after defending a jump shot — would be a significant blow to the Badgers.

Freshman guard Melo Trimble has been a big reason for Maryland’s success. Trimble’s ability to get to the free throw line has turned him into one of the Big Ten’s best young players. Trimble has gotten to the free throw line more often than any Big Ten player in the KenPom era other than Iowa’s Aaron White. There’s obviously more basketball to be played, but here’s how White and Trimble’s free throw rates this season compare to every other free throw rate recorded by a Big Ten player who played at least 60% of available minutes.

What’s most impressive about Trimble’s ability to get to the line? He’s shooting 89% on freebies with over 132 attempts.

Michigan State is far from flawless, and needed overtime to beat Northwestern at home on Sunday, but earns the third spot in our power rankings after an impressive second half dismantling of Iowa in Iowa City. The Spartans have emphatic wins over Iowa and Indiana and have recovered nicely from their double overtime loss to Maryland.

Despite Tom Izzo’s reputation and track record of toughness and physical interior basketball, these Spartans are decidedly perimeter-oriented. Michigan State is a jump shooting team that can’t get to the free throw line and is just above-average on the offensive glass. The Spartans have scored only 15.4% of their points at the free throw line, the lowest percentage among high-major teams.

While at times it seems like it might pain Tom Izzo to coach a perimeter-oriented team, the Spartans shoot 41.3% on threes (5th best in the country) and need to shoot more threes, not less.

Like most of the middle of the Big Ten, it’s tough to judge the Buckeyes right now. Their best non-conference win was at home over an average Marquette team and they’ve already dropped a game at home (to Iowa) and on the road (at Indiana). Losing at home this early in the season is troubling for a team that most would label as a contender, but the Buckeyes have the league’s best freshman and are likely to be in the mix at the top of the league throughout the season. This week the Buckeyes will host Michigan before traveling to Iowa City to avenge their home loss to the Hawkeyes.

Iowa has plenty of talent and is the third most experienced team in the Big Ten, but can Fran McCaffery’s Hawkeyes ever take the next step? I tweeted during the second of half of Iowa’s embarrassing home collapse against Michigan State that the game was a microcosm of Iowa’s 2013-14 season. When things are going well, Iowa can blow the top off of a game and beat just about anyone. This is a team that won at Ohio State and North Carolina – two of the best road wins by any Big Ten team this season – but this also a team, and perhaps program, that crumbles when it gets hit square in the mouth.

Indiana had one of the best offenses in non-conference play, but the transition from a weak non-conference slate to a difficult Big Ten slate has led to some growing pains. The Hoosiers are scoring just .96 points per possession and are only shooting 24% on three-point attempts. The 20 point loss at Michigan State was ugly, but the Hoosiers also have quality wins at Nebraska and at home against Ohio State.

Michigan is tied for first place in the conference at 3-1 after a dreadful non-conference season, but attentive readers will point out that its wins are over teams that are a combined 1-10 in conference games.

The million dollar question for John Beilein and his staff is whether Caris LeVert can start making his jump shots off the dribble. The Wolverines’ reliance on the ball screen game magnifies the importance of these shots and LeVert is really struggling to make them. (Data via Synergy Sports)

Only DJ Newbill has attempted more off the dribble jumpers than Caris LeVert this season and only Andre Hollins has shot worse on off the dribble attempts. That’s a problem for Michigan and a big reason that the Wolverine offense has struggled to score.

The bad news is that LeVert struggled with this shot last season as well. He managed just a 33.5 eFG% on off the dribble jumpers, only a few percentage points better than he’s shooting this season. The difference between this season and the last one is that Michigan had other options to take those shots in Nik Stauskas (47.4 eFG% on 136 attempts), Glenn Robinson III (41.1 eFG% on 73 attempts) and Derrick Walton (47.4 eFG% on 38 attempts). This year, LeVert’s teammates haven’t been able to shoulder the load. As a team, Michigan has managed just a 29.6 eFG% on 179 attempts.

Purdue does a great job of playing to its strengths. The Boilermakers post it up nearly three times as often as anyone else in the league, they have the best 2-point defense in Big Ten games and are ranked 1st in offensive rebounding and second in defensive rebounding.

While Purdue can control the paint against just about anyone, the question is whether it can hit enough threes (29% in league games) to keep up offensively. Entering Big Ten play on a three game losing streak punctuated by a loss to Gardner Webb leaves a bad taste in everyone’s mouth, but there’s not much to complain about with the Boilermakers’ performance in league play.

Home wins over Minnesota and Michigan are very solid and losses at Wisconsin or at home to Maryland are nothing to scoff at. This week should provide an important test for Matt Painter’s group: how do they perform in winnable road games at Penn State and Illinois.

Nebraska is finally healthy, with Leslee Smith and Moses Abraham back in the lineup, but the key to the Cornhuskers success is whether Terran Petteway, Shavon Shields and Walter Pitchford can score enough points to carry the team.

Illinois lost Rayvonte Rice for 3-6 weeks with a broken left hand, marking the second major injury that Illinois has had to weather this season after Tracy Abrams tore his ACL in September.

That being said, points have come at a premium for Illinois in league games and John Groce would welcome any option. Malcolm Hill – 28 points in an upset win over Maryland – is the best choice, and one of the most-improved players in the league. But when he goes cold, as he did at Nebraska on Sunday (4-15 from the floor), then John Groce is left with a team that can only score 43 points in 60 offensive possessions.

Northwestern picked up a critical win at Rutgers (which looks even better now) and nobody is going to hold losses to Wisconsin or at Michigan State against them. The real question might be what is it about the Breslin Center for the Wildcats? Last year, they scored 1.14 points per trip in East Lansing, their best offensive output in conference play, and this year they rattled off 1.10 points per possession – their best offensive performance against a major conference foe to date. The Wildcats love shooting the ball in East Lansing, but fell one Tre Demps stepback short of a monumental upset.

The Big Ten isn’t a forgiving league and the schedule can ruin a team. After cruising through an easy non-conference slate with an 11-2 record, Minnesota has been served a healthy dose of humble pie in Big Ten play. The Gophers have played three of four games on the road and now sit at 0-4.

Minnesota is one of the most experienced teams in the conference and has been through the ups and downs of a Big Ten season before, but the time is now to turn it around. Even after losing four straight, Ken Pom projects the Gophers as a favorite in their next seven games.

You might have noticed DJ Newbill on the off the dribble shooting graph above. Newbill is a rare breed and it’s a shame that Pat Chambers hasn’t been able to get a better group around him. Newbill is having a remarkably efficient season and he’s one of the best elbow jump shooters in the country. The following shot chart, courtesy of Shot Analytics, demonstrates just how consistent Newbill is from the middle of the floor.

Newbill shoots a combined 60% at the elbows, an area of the floor where the Division I average is around 37%.