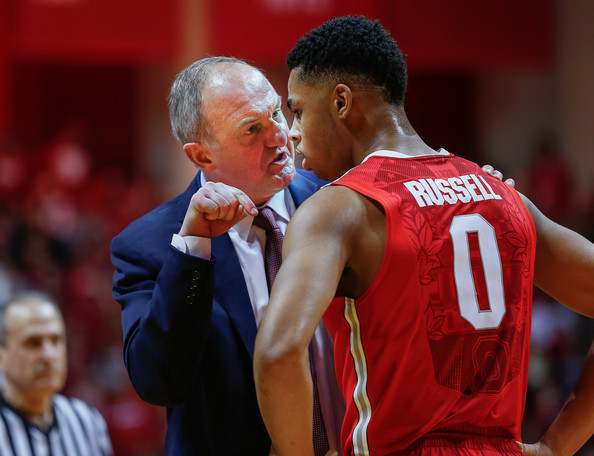 Michigan heads to Columbus this evening as a heavy underdog, but with a golden opportunity to revive its season against Ohio State. The Buckeyes will lean on freshman phenom D’Angelo Russell, their transition offense and a shift back to man-to-man defense.

Michigan heads to Columbus as a heavy underdog, facing its but also with a golden opportunity to revive their season. A loss won’t set the Wolverines back by much, but beating the Buckeyes on their home floor would turn Michigan’s season around as fast as losing to NJIT.

The Wolverines have been searching for that one game or moment to hang their hats on and jumpstart a season that hasn’t been able to get off the ground. For one reason or another, they haven’t been able to find it.

Michigan has managed to tread water through four Big Ten games, mounting home comebacks against Minnesota and Illinois and splitting a pair of road games, and has a chance to strike.

“You’re hoping when you have times like that, when you lose four in a row that it just takes one win and, all the sudden, their confidence comes back,” John Beilein said on Monday.

The Wolverines hope they can hold onto that confidence in Columbus. A win will keep Michigan in a tie at the top of the conference while a loss will put extra pressure on upcoming games against Northwestern and Rutgers. Somewhere along the line, Michigan is going to have to win a couple of games that it isn’t supposed to and this is its first opportunity to do that since conference play began.

Last year’s Ohio State team was the worst offensive team that Thad Matta has coached during the KenPom era, but replacing Aaron Craft with D’Angelo Russell has the Buckeyes back where many expect. Ohio State is ranked 21st nationally in adjusted offensive efficiency and is scoring 1.06 points per trip in league play.

The major reason for Ohio State’s turnaround offensively is that it’s simply a much better shooting team. The Buckeyes are shooting 57% on twos (7th nationally) and 39% on threes (32nd nationally) for a 57.4 eFG% (7th nationally). To put that stat in perspective, Michigan has managed better than a 57.4 eFG% only three times this season – against Hillsdale, Nicholls State and Penn State. The Buckeyes haven’t played the toughest schedule, but their offense has bludgeoned just about everything in its way.

The Buckeyes don’t get to the line often, but are above-average in both the turnover and offensive rebounding departments. Ohio State also loves to push the ball in transition. Over a quarter of Ohio State’s offensive possessions are in transition, more than anyone else in the league by a comfortable margin.

Defensively, Ohio State isn’t quite at the same level that it has been for the last four or five years. The Buckeyes are ranked 44th nationally in adjusted defensive efficiency and have given up 1.03 points per possession in Big Ten games – eighth best in the conference.

Thad Matta went into this season with the plan to play the 2-3 zone and he stuck with it until the Buckeyes were beaten wire-to-wire at home by Iowa in the Big Ten opener. Iowa scored 1.17 points per possession in that game and the zone has quickly become history. In their next game against Illinois, the Buckeyes ran the 2-3 zone for just 19 possessions. Then against Minnesota, they recorded one possession of zone defense and against Indiana the zone was extinct.

At the very least, Matta has limited the amount of defensive film that teams have to prepare from. The Buckeyes have played man-to-man defense for roughly two and a half games and everything on film before January is fairly worthless.

Given the switch to man-to-man defense, it’s tough to read too far into Ohio State’s statistical profile, but the Buckeyes do two things as well as anyone in the country: force turnovers and avoid fouls. Buckeye opponents have given the ball away on 26% of their offensive possessions this season and Ohio State has forced a turnover rate of at least 20% in all four Big Ten games.  Ohio State has struggled on the defensive glass, allowing an offensive rebounding rate of 31.6% (193rd nationally) and 35.4% in Big Ten games (last in the conference).

D’Angelo Russell is arguably the conference’s best freshman. He’s averaging 18 points, five assists and five rebounds per game and is a playmaker at every level. He’s shooting 46% on twos and 45% on threes and he’s also a great distributor, capable of rattling off no-look passes in transition or creating off of the pick-and-roll.

Russell is a very high-usage player, accounting for 29% of Ohio State’s offensive possessions, but he’s also remarkably efficient with an offensive rating of 114.5. He has hit a few ups and downs against major competition. He was held to an offensive rating under 100 against Louisville, Marquette, North Carolina and Indiana and after exploding for 25 points in the first half against Minnesota, he was limited to just 2 in the second half and overtime. In Saturday’s loss at Indiana, he was just 3-of-15 form the floor for 13 points. Russell is going to get his opportunities and if he’s connecting with his long range shot, the Buckeyes are tough to stop.

Shannon Scott is the best setup man in the Big Ten and while he isn’t a shooter (28% career 3-point shooter), he isn’t afraid to take open jump shots and knocked down two against Indiana. Scott is also third in the Big Ten in steal rate while only being whistled for 1.6 fouls per 40 minutes. Scott is one the best defenders in college basketball and will likely be tasked with shutting down Caris LeVert.

Marc Loving is one of the most improved players in the Big Ten this season. Averaging 12 points per game, Loving is shooting 50% on twos and 50% on threes with close to a 50-50 split in attempts. He’s primarily a spot up shooter, but his size allows him to be a very good one. Loving has had a couple of highlight reel tip slams, so he’s also capable getting into the mix attacking the basket. His size should make him a difficult cover for Zak Irvin. Sam Thompson’s springs have been around the Big Ten for a while now and he’s still one of the league’s most dynamic above the rim athletes. Thompson is having his most efficient season of his career despite shooting just 23% on three-point attempts this season.

Amir Williams starts at the five position and is backed up by Trey McDonald and fifth-year Temple transfer Anthony Lee. Williams grades out as an above-average post scorer and he’s shooting 71% on twos. He’s also ranked 12th nationally in block rate and is the most consistent rebounder in Ohio State’s starting lineup. McDonald and Lee are both solid finishers around the basket, but both are playing less than 30% of available minutes.

Jae’Sean Tate is a sixth man to fear for John Beilein and his staff. Caris LeVert’s former teammate at Pickerington Central is physical specimen.  He’s a dominant rebounder on both ends and the 6-foot-4 ‘power guard’ shoots 65% on twos. He’s not much of a threat away from the basket, but keeping him off the glass will be a challenge and he’s also capable of exploiting mismatches down low against smaller guards.

Michigan is a heavy underdog tonight according to Ken Pomeroy’s metrics, which predict a 69-59 Buckeye win. The Wolverines haven’t beaten anyone good enough to move their ranking higher than 76th, but a road win in Columbus might do the trick.