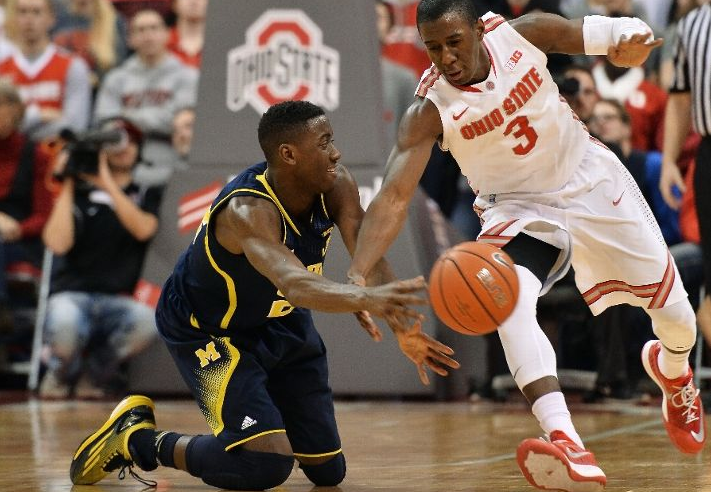 After winning three of its first four Big Ten games, Tuesday’s trip to Columbus was supposed to be an opportunity for Michigan to prove how much it has improved since December. Instead, it was a harsh reminder of just how far the Wolverines have to go.

After winning three of its first four Big Ten games, Tuesday’s trip to Columbus was supposed to be an opportunity for Michigan to prove how much it has improved since December. Instead, it was a harsh reminder of just how far the Wolverines have to go.

This wasn’t about a raucous crowd or a great atmosphere – Michigan players discussed the eerie silence of Value City Arena, not the intimidating crowd – it was about a team that didn’t have the discipline, talent or cohesiveness to challenge the Buckeyes on their home floor.

Michigan’s offense managed just .83 points per trip, gave the ball away on a fifth of its possessions and didn’t shoot a free throw until there were four minutes to play in the second half.

John Beilein discussed how Michigan coaches and players would look for small victories to take from Tuesday’s blowout loss, but overall there was very little positive to take from this offensive performance. The Wolverines fired around lazy passes and were unable to generate anything at the rim (42%) on twos, while only making six of the 26 threes they fired up.

Defensively, Michigan was ran out of the gym. The Buckeyes finished with a scoring output of 1.13 points per trip — Michigan’s third worst defensive performance of the season — but it easily could have been much worse. The most disappointing element of Michigan’s defensive effort was its inability to stop Ohio State’s transition offense. I wrote in the preview that the Buckeyes pushed the ball harder than anyone in the league, and Michigan learned that the hard way.

Ohio State outscored Michigan 19-2 in transition and many of them were painfully easy whether it was a big man running the floor past the entire Wolverine defense or no one picking up wide open shooters and drivers. Late in the game Michigan gave up some easy offense due excessive trapping to try to get back into the game, but the early easy baskets were the most damning because they were no surprise — everyone knew what was coming.

Despite the rough first half, the most disappointing stretch was the first seven and a half minutes of the second half. Michigan was awful in the first half, but had a chance to respond with anything positive immediately out of the halftime break. Instead, the Wolverines missed 11 straight shots and turned the ball over three times as Ohio State stretched its lead to 28 points.

John Beilein’s only option was to yank his leading scorers, Caris LeVert and Zak Irvin, to send a message. The message was finally received as Michigan went on an 8-0 run, but the embarrassment was complete. The biggest question after tonight is where is this team’s leadership and backbone. Beilein has discussed the importance of ‘energy givers’ on a roster — players that provide positive energy during tough times or after bad plays — and right it’s tough to find any on this roster. No one stepped up when the team “lacked energy” in the first half, and no one stepped up to start the second half.

This is a major punch in the gut for a Michigan team trying to build momentum, but so was an 18 point second half at Purdue. The Wolverines need to bounce back and have winnable games against Northwestern and Rutgers next on the schedule.