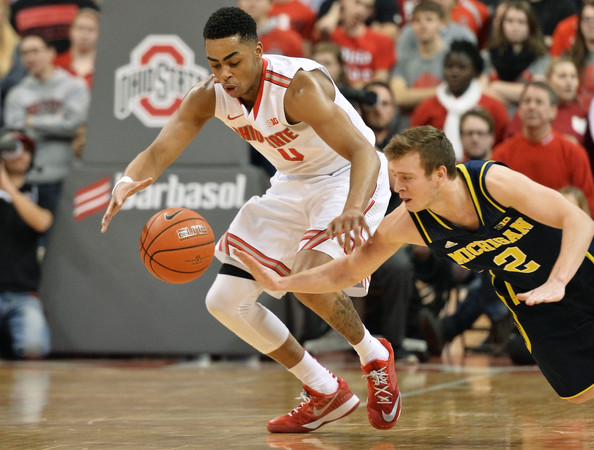 The circumstances certainly seemed beneficial to the young Wolverines, which would have less adversity to handle as they searched for their first Big Ten road win. But, following a 71-52 loss, captains Caris LeVert and Spike Albrecht claimed the opposite.

COLUMBUS, Ohio — Given the circumstances, Value City Arena was understandably subdued for the Ohio State’s game against Michigan on Tuesday.

The Buckeye football team had just earned a national championship late the previous night, after all. As a result, swaths of empty seats and halfhearted cheers replaced what is usually a raucous environment for the rivalry matchup.

The circumstances certainly seemed beneficial to the young Wolverines, which would have less adversity to handle as they searched for a statement Big Ten road win. But, following a 71-52 loss, captains Caris LeVert and Spike Albrecht claimed the opposite.

Michigan “didn’t come out with the necessary energy to win that game,” according to LeVert.

“We said, ‘We don’t want to dig ourselves a hole on the road,’ ” Albrecht said. “It’s a whole different animal than playing at home. Unfortunately, that’s what we did tonight, and we couldn’t climb ourselves out.”

That deficit didn’t come until midway in the first half, though, as the Wolverines had a 14-13 lead eight minutes into the game behind eight points from Zak Irvin, and buckets from Albrecht and Kameron Chatman.

But then the Buckeyes went on a 26-10 run to close the first half, giving them a 15-point lead at the break.

That early lead may have been also detrimental, according to Albrecht.

“From the very beginning, it was a little different than what I expected,” the guard said. “Usually Ohio State, with the big rivalry, they jump out into us, climb into us, all the rah rah. But they didn’t do that.

“We were kinda coasting along with them for the first four minutes, and I felt like we stayed in that coast mode for the rest of the first half, and they picked up, and we just didn’t match it.”

Michigan coach John Beilein admitted a lack of energy contributed to the disheartening loss, but he pointed to other factors as well. For instance, Derrick Walton committed his second foul of the first half at the 10:04 mark, so the guard sat the ensuing six-and-a-half minutes. In that time, the Wolverines committed three turnovers and scored just six points.

The Wolverines coughed the ball up 13 times total and allowed Ohio State to rebound 44% of its misses in the first half.

“I think you have to add to [the lack of energy] the fact that Derrick Walton wasn’t out there,” Beilein said. “That was a big part of it, because all of a sudden, you have a couple freshman in there trying to figure things out, and they’re a very good defensive team. They turned us over in full court, they got offensive rebounds.

And halftime didn’t do much to change the course of the game. Ohio State coach Thad Matta said he reminded his players how Michigan had trailed by double-digits in wins against Minnesota and Illinois, and his Buckeyes proceeded to hold the Wolverines scoreless for the first 6:32 after the break.

When Max Bielfeldt finally got his team on the board with a putback, Michigan was being doubled, 52-26.

But by then, Value City Arena was plenty loud, as the 15,548 in attendance cheered Ohio State to its resounding victory.

“I’m definitely surprised, and even disappointed,” Albrecht said. “It was just, as Coach B said, a weird, weird atmosphere out there. Guys like Caris and myself, we’re the veterans. If we see that and we feel like the energy level is low on this team, we have to step up and say something.

“We didn’t do that tonight.”