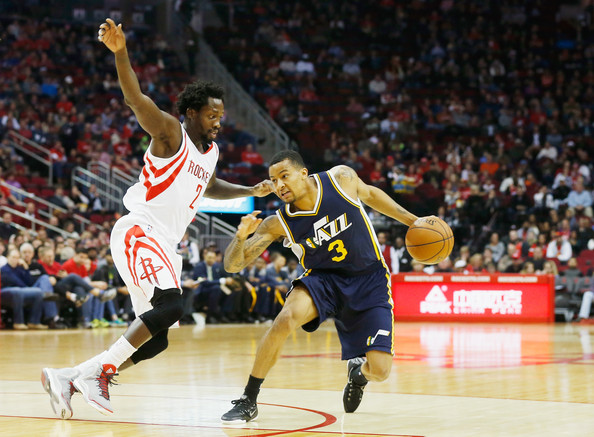 With five Michigan players drafted in the past two seasons, we’ve created the NBA roundup to track their progress throughout the season. This roundup focuses on Trey Burke’s recent hot streak, Tim Hardaway Jr.’s struggles and Nik Stauskas’ adjustment to the NBA.

Trey Burke is starting to get on a roll in Utah. Burke is averaging 17.8 points, five assists and five rebounds per game over Utah’s last five and he’s starting to turn around his season after a disappointing start.

Overall, he’s averaging 12.7 points and five assists per game this season while shooting 42% on twos and 31% on threes.

Burke is still struggling with his efficiency — both from three-point range and at the rim — but the turn around in play has been encouraging. HoopsHabit writes that it’s time to accept Burke as a scoring point guard.

Here’s Burke’s shot chart from this season (via Shot Analytics), which helps illustrate some of his struggles. Here are some recent highlights of Burke’s 28 point, six assist performance against the Minnesota Timberwolves.

The New York Knicks are a mess. They’ve lost 15 straight games and traded away J.R. Smith and Iman Shumpert. That move left Tim Hardaway Jr. as one of the Knicks only shooting guards and he’s struggled a bit to pick up some of the slack.

Hardaway is just 4-of-24 from three-point range since the Knicks dealt Smith and Shumpert. Knicks head coach Derek Fisher says the issue isn’t about hard work, but rather finding consistency.

“I just try to encourage Tim to continue to build consistent habits, a consistent approach, a consistent mindset,’’ Fisher told the New York Post. “Tim is a second-year player, he’s not going to have all of what you need to be consistently successful at this point, but he’s doing well.

“He’s having a rough patch right now, but he works hard every day. He’s the first one in the building most afternoons.’’

Hardaway’s shot chart shows a player that is struggling with his jump shot and isn’t finishing as well at the rim. He’s averaging 23 minutes, 11 points, two assists and two rebounds per game. The Post also points out that former Knicks shooting coach Dave Hopla’s absence could be another reason for Hardaway’s struggles as he was fired this offseason along with the rest of the Knicks coaching staff.

The Knicks are currently in London where they’ll face the Milwaukee Bucks this afternoon.

Nik Stauskas learning on the job

Former Michigan guard Nik Stauskas hasn’t had the most productive rookie season in the NBA, but he’s embracing the opportunity that he has playing professionally. The adjustment from his involvement in the offense at Michigan compared to in Sacramento has been difficult.

“Everyone comes into the NBA from college and they’re used to being the man on their team,”Stauskas told MLive. “They’re used to getting the ball every time down the floor. For a guy like me, who likes to shoot the ball, sometimes I come down the floor three, four, five minutes and I’m not getting a shot up.

“For me, sometimes it’s tough to stay in rhythm and stay ready when you’re not as much a part of the offense as you’re used to.”

Overall, Stauskas is averaging 16 minutes and four points per game for the Kings and is shooting only 27% from three-point range. His shot chart is a surprise given how well he shot the ball for two years at Michigan. In lighter news, a high schooler asked Nik Stauskas’ girlfriend to prom and the 6-foot-6 guard is also battled Peja Stojakovic in a game of HORSE.

Mitch McGary just can’t stay healthy. The big man has been struggling with injuries for several years now and has only attempted one shot during his rookie year in the NBA.

After missing time with a foot injury, McGary was sidelined for 2-3 weeks with shin inflammation. Reports are that McGary returned to practice with the Thunder this week, but in a limited fashion and no timetable has been set for his recovery.