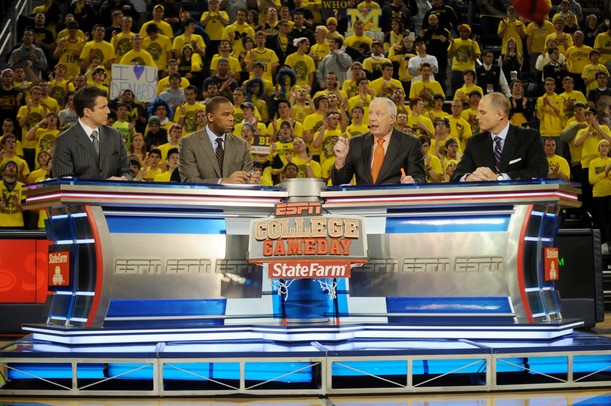 ESPN’s College GameDay is heading to Ann Arbor on January 24th when Michigan hosts No. 7 ranked Wisconsin. Tip-off between the Badgers and Wolverines is scheduled for 7 p.m. on Saturday evening and GameDay will be broadcast on ESPNU (10 am) and ESPN (11 am, 6pm) throughout the day.

Full details in the University Press Release below.

ANN ARBOR, Mich. — ESPN’s College GameDay will return to Ann Arbor for the University of Michigan men’s basketball game against No. 7 Wisconsin at Crisler Center on Saturday(Jan. 24). Tipoff is scheduled for 7 p.m.

GameDay’s first hour begins at 10 a.m. on ESPNU, before moving to ESPN at 11 a.m. There will be n evening edition will air at 6 p.m. leading into the primetime game on ESPN. In addition to the GameDay broadcast, ESPN 3 Surround will return for the game, featuring in-arena natural sound and views from above the rim cameras at each end of the floor.

This will be GameDay’s second visit to Ann Arbor after ESPN was at Crisler Center for U-M’s game against Ohio State on Feb. 18, 2012. In that game, the Wolverines claimed a 56-51 decision over the Buckeyes after leading from start to finish.

ESPN’s College GameDay Covered by State Farm has new faces for the upcoming men’s college basketball season as analysts Seth Greenberg and Jay Williams join the retuning duo of host Rece Davis and analyst Jay Bilas. Dan Shulman, Bilas and reporter Shannon Spake will have the call of the game.