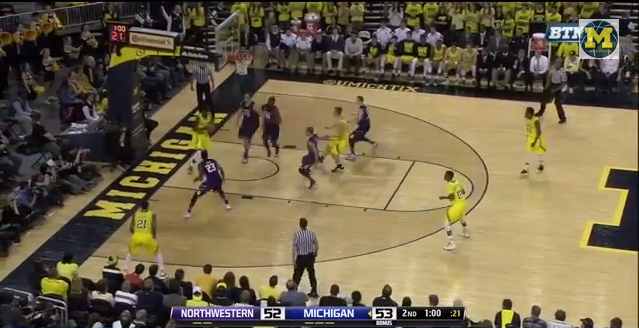 The Michigan basketball team eked out a 56-54 win over Northwestern on Saturday night at the Crisler Center. For a closer look at how it happened, check out Five Key Plays.

The Michigan basketball team eked out a 56-54 win over Northwestern on Saturday night at the Crisler Center. For a closer look at how it happened, check out Five Key Plays.

Michigan had perhaps its best stretch of the season midway through the first half, using efficient offense and solid defense to build a 14-point lead with an 18-0 run.

The onslaught began with a Caris LeVert three-pointer from the top of the key, a look set up by a pair of off-ball screens by Muhammad-Ali Abdur-Rahkman, then Ricky Doyle at the elbow and free throw line, respectively.

After a pair of defensive stops, LeVert struck again, this time getting into the paint thanks to a screen set by Mark Donnal — the pick-and-roll meant Jeremiah Kreisberg had to leave the guard open for the jumper.

Later, LeVert grabbed the rebound off of a Vic Law missed three and used a slick crossover to create space by the elbow. Instead of shooting, though, he drove toward the low post, drawing Law away from Derrick Walton in the corner. That freed Walton for a three, which he hit — and was probably fouled, though that went uncalled.

The Wildcats missed a pair of three-pointers on their next possession, and LeVert was left alone at the top of the key for a trey of his own in transition, capping Michigan’s 4-for-4 start from deep.

Northwestern called timeout, but Abdur-Rahkman and Kameron Chatman made jumpers after the break to stretch the lead to 14, and the Wolverines were seemingly in control early.

2) Wildcats claw back into game

Just when it seemed as if Michigan would take a comfortable lead into halftime, one sequence turned the course of the game.

Michigan made some of the mistakes it’s made all season and opened the door for Northwestern to get back into the game.

The sequence began with a tip-in by Law, who scored over Zak Irvin after Irvin mistimed his jump and failed to sufficiently box him out. On the offensive end, Abdur-Rahkman attempted an ill-advised backdoor pass to LeVert under the basket, where the junior had three Wildcat players in position to break up the feed.

Unsurprisingly, Abdur-Rahkman’s pass resulted in a turnover, and, after he committed a foul on the other end, Northwestern scored on an inbounds play when Caris LeVert got caught in a simple screen and left JerShon Cobb wide open.

Then Walton missed a heavily contested jumper early in the possession.That was a forced shot that Michigan didn’t need at the time and after Alex Olah grabbed the rebound, he simply beat Ricky Doyle down the floor for an easy layup through a foul.

After the free throw, Northwestern trailed by just five after a sequence that was indicative of many of Michigan’s struggles this season.

For whatever the reason, the Wolverines have simply been unable to sustain effort (boxing out), focus (guarding simple BLOB sets), and execution (forced shots and passes).

As John Beilein admitted after the game, Michigan had no answer for Alex Olah.

Doyle’s illness almost certainly played a part in that, but neither he, Donnal nor Max Bielfeldt could defend the Northwestern center one-on-one.

In the closing minutes of the first half, Olah scored 11 straight points to help give the Wildcats a halftime lead.

After the and-one from the previous sequence, Olah scored over Abdur-Rahkman and Walton from the pick-and-roll. Then, the 7-footer simply backed down Doyle for a lay-in, despite (slightly late) help defense from Irvin. Later, Olah grabbed an offensive board and putback over Donnal, boxing out the center with ease.

In the second half, Northwestern made a concerted effort feed Olah, getting the ball to him on its first two possessions. At the 19:06 and 17:40 mark, he simply overwhelmed Donnal, and, when Michigan brought a (very late) double team by LeVert, he found Law open in the paint for a layup.

“We couldn’t stop him down low,” Beilein said. “You just think about this kid, really good player out of Romania, playing a lot of European basketball, now he’s got two freshman — Ricky and Mark — he’s picking on, and an undersized center.”

By the time Donnal picked up his fourth foul with eight minutes to play, Michigan was defending almost exclusively with the 1-3-1, which helped prevent Northwestern from getting the ball inside to Olah.

Saturday, Abdur-Rahkman was an outlier.

Making his first career start, the freshman delivered a key three-pointer to put Michigan up four with less than a minute left.

As Beilein explained after the game, the play was designed through LeVert, who had a freshman on him in Scottie Lindsey. The Michigan guard got the ball in the right wing and beat Lindsey off the dribble, forcing Olah and much of the Northwestern defense to collapse around him. All five Northwestern defenders were focused on LeVert, leaving Abdur-Rahkman and Walton free for three-pointers. LeVert found Abdur-Rahkman, and the freshman didn’t hesitate to pull up.

“It was a wide-open jump shot,” he said. “Coaches always tell us to shoot with confidence. When you’re open with that, you have to take the shot.”

With the game on the line, Northwestern coach Chris Collins wanted the ball in Bryant McIntosh’s hands.

The freshman has been nothing but reliable this year, and when a lane to the basket opened for him with the clock winding down, the Wolverines and Wildcats seemed destined for overtime.

Given the circumstances, Northwestern did a fantastic job of moving the ball. McIntosh carried the ball up the court, and he got the ball to Olah inside. There, the center had a clear height advantage over LeVert, but he instead kicked out to Lindsey, who made a snap pass back to McIntosh at the three-point line.

There, McIntosh easily beat Bielfeldt off the dribble — although the big man did a good job of running McIntosh off the line — and the Wolverines’ defense broke down. Walton was defending a corner three, and leaving his man would mean allowing the potential game-winning three. Meanwhile, LeVert was being boxed out by Olah inside.

McIntosh missed, plain and simple. Walton’s jab inside seems to have forced the freshman to pull up a moment sooner than he would’ve liked, but it was still a look McIntosh would make nine times out of 10. But the bunny hit the glass and rolled off the rim, LeVert and Irvin tipped the ball away, and time expired.

Unfortunately the Wolverines also lost their best player for the season as Caris LeVert rolled his foot in the waning moments of the game. The team announced LeVert would undergo surgery this week and miss the remainder of his junior year.