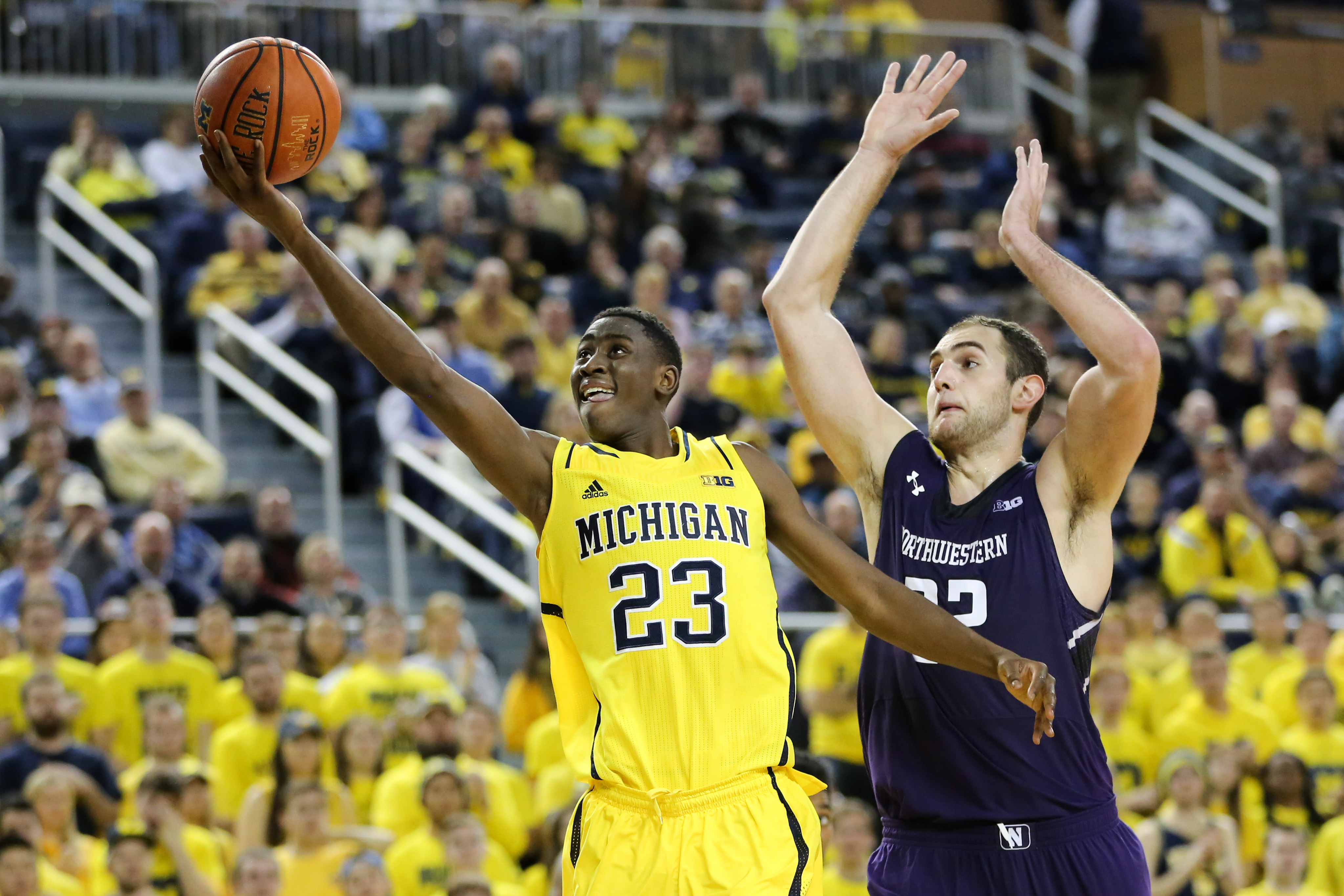 Michigan needed a bit of luck, but managed to escape with a 56-54 home victory over Northwestern on Saturday night thanks to clutch performances from Caris LeVert, Muhammad-Ali Abdur-Rahkman and Derrick Walton.

Michigan needed a bit of luck, but managed to escape with a 56-54 home victory over Northwestern on Saturday night.

The Wolverines were without Spike Albrecht, who missed the game with an upper respiratory infection, and big man Ricky Doyle was limited to 10 minutes battling illness symptoms of his own.

Despite being shorthanded, Michigan jumped out to a 25-11 lead in the first ten minutes of play. Everything was clicking for the Wolverines, who put together an 18-0 run during that stretch, and they looked to be ready to cruise to an easy win after one of the best stretches of basketball they’ve played all season. But then Michigan cooled off and Northwestern responded with a run of its own and went to the locker-room with a lead after outscoring the Wolverines 21-7 to finish the half.

The second half was and back and forth affair featuring three lead changes and three ties, and neither team led by more than five points. Both teams were far from perfect in the final 20 minutes and the game was up for grabs down the stretch.

It took a star performance from Caris LeVert, some big shots by Muhammad Ali Abdur-Rahkman, critical minutes from Max Bielfeldt, some 1-3-1 zone wizardry and a missed layup by star freshman Bryant McIntosh at the final buzzer, but Michigan survived with a two-point win.

“We got a W,” John Beilein said after the win. “I don’t know how, but we ended up getting it and we’ll take it.”

Michigan hasn’t won a game when it scored less than 1 point per possession since a 58-57 win over Michigan State two years ago. While Wolverine assistant coach Bacari Alexander loves the phrase ‘gritty not pretty’, the fact of the matter is that Michigan usually needs a strong offensive performance to win games. Michigan wasn’t pretty tonight and was just gritty enough to pull out a victory despite being outshot and outrebounded.

At this point, the Wolverines are simply unable to score the ball around the basket. Michigan shot just 31% on twos for the game and is now the second worst 2-point shooting team in the Big Ten at just 41.1% in league play. The Wolverines actually shot the ball better from three-point range (39%) which helped its effective field goal percentage to a meager 42.2%.

Turnovers were Michigan’s saving grace. Northwestern doesn’t force turnovers — Big Ten opponents have turned the ball over on just 9.5% of their possessions against the Wildcats — and Michigan rarely turns the ball over, as a result the Wolverines gave the ball away on only 5% of their offensive possessions. The extra possessions were critical for a Michigan offense that needed all of the help it could get.

In the second half, John Beilein looked for Caris LeVert to carry the offense. LeVert was just 2-of-9 from the floor, but he also had six second half assists, meaning he was responsible for eight of Michigan’s nine made field goals in the final 20 minutes of play.

Defensively, Michigan held Northwestern to .93 points per trip for the game, but it was far from a flawless performance. The Wolverines’ transition defense was dreadful in the first half – a damning assessment against one of the slowest and worst transition teams in the conference – and Wildcat big man Alex Olah was dominant in the paint. Olah finished with 22 points on 9 of 12 shooting with seven rebounds and two assists and he seemed like he could have had 30+ had Michigan kept with its man defense.

Northwestern only rebounded 29% of its misses, but Michigan’s defensive rebounding performance was far from inspiring. Wolverine centers didn’t record a defensive rebound and the Wildcats scored eight second chance points for the game.

The 1-3-1 zone bailed Michigan out once again. Michigan pulled out the 1-3-1 zone for at least half of its second half possessions – and even started running the zone off of misses late in the game – and Northwestern simply couldn’t produce. The Wildcats made some mistakes against the zone, but they also ran some pretty good offense and simply missed open shots from the corners. For Michigan, giving up (mostly open) threes was a better option that letting Alex Olah shoot layups, and the gamble paid off.

I’m still not sure the 1-3-1 zone is the ultimate answer for Michigan’s defense – even when it works, it usually gives up some open looks – but it’s tough to argue with the results. The zone seems to speed teams up just enough that they miss what would otherwise be routine looks. I loved the adjustment of moving Muhammad-Ali Abdur-Rahkman to the top of the zone and shifting LeVert to the wing as that combination seemed to be even more disruptive.

A 56-54 win over Northwestern isn’t going to leave warm and fuzzy feelings, but Michigan sits at 4-2 with a chance at another win when it goes to Rutgers on Tuesday.  The Wolverines don’t have the sexiest wins in the league — its Big Ten wins are over teams with a combined 4-16 in conference play — but only three other teams have managed to win four games in conference play this season.