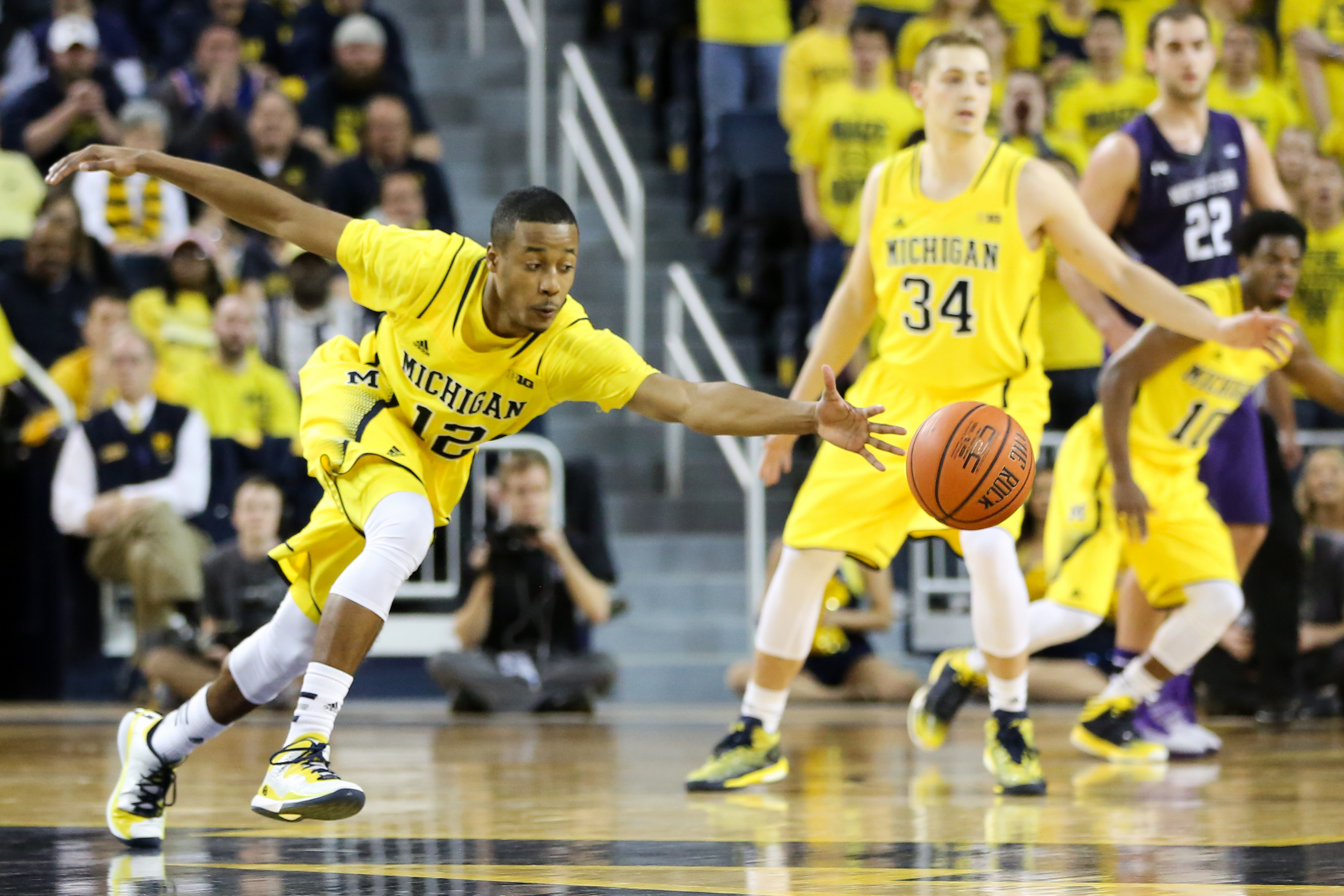 Muhammad-Ali Abdur-Rahkman earned the first start of his career filling in for a sick Spike Albrecht, and, with the Wolverines up one and a minute to play, he buried the game-winning three-pointer as Michigan held on to beat Northwestern, 56-54.

Saturday was Muhammad Ali’s birthday, and a different Muhammad Ali decided to use that as inspiration.

Knowing he’d be given an expanded role that night, Muhammad-Ali Abdur-Rahkman of the Michigan basketball team watched inspirational videos of the boxer to build confidence.

Abdur-Rahkman earned the first start of his career filling in for a sick Spike Albrecht, and, with the Wolverines up one and a minute to play, he buried the game-winning three-pointer as Michigan held on to beat Northwestern, 56-54.

Did the words of “The Greatest” help the freshman?

Abdur-Rahkman wasn’t quite the outlier like Max Bielfeldt and Aubrey Dawkins were at times this season. But the freshman made the big plays when it counted.

The crucial trey came on a feed from Caris LeVert, who had drawn defenders toward him by the baseline. Abdur-Rahkman caught the pass, and, without hesitation, let the shot fly.

“It was a wide-open jump shot,” he said. “Coaches always tell us to shoot with confidence. When you’re open with that, you have to take the shot.”

Northwestern’s Alex Olah made a layup to bring the Wildcats within two, but a minute and a missed layup from Bryant McIntosh later, Abdur-Rahkman’s three stood to move Michigan to 4-2 in the Big Ten.

The play capped a solid nine-point, five-rebound performance from the freshman, who didn’t know he’d be starting until minutes before tipoff. Beilein wanted to continue using a small lineup, so he turned to Abdur-Rahkman instead of Kameron Chatman or Dawkins.

“No one went in there today saying, ‘Man, I can’t wait to see Muhammad hit a big shot tonight,’ right?” coach John Beilein said. “Nobody thought that.”

Though the guard made some mistakes on both sides of the ball, Beilein gave him 26 minutes — 11 more than his previous career-high — and he took advantage.

Abdur-Rahkman assisted Derrick Walton on Michigan’s first score of the day — a straightaway three — and then made a bucket of his own, driving for a layup. He also hit a jumper midway through the first half.

“There’s not time to have butterflies or anything like that,” Abdur-Rahkman said.

But his crucial moments came as the game wound down. When JerShon Cobb missed a transition layup with 2:37 left, Abdur-Rahkman grabbed the defensive rebound. Instead of pursuing a contested opportunity in transition, the freshman held the ball for Beilein to call timeout.

After the break, Caris LeVert missed a difficult layup, but Abdur-Rahkman corralled the offensive board to help the Wolverines kill the clock while up four.

Then came the crucial three, which Abdur-Rahkman said “felt good” coming off his hand.

Now just 3 of 11 from three-point range this season, Abdur-Rahkman’s four made makes more than doubled his season total of made field goals. He’s now 7 of 23 from the field for the season after logging career highs in minutes in back-to-back contests.

“Muhammad was the guy — they were going to leave him open all day,” Beilein said. “You look at his shooting, he has been working so hard in practice, and you can see it’s getting closer and getting closer. I’m not that surprised, knowing the volume of shots and the big shots he hit in high school, but we haven’t seen it here yet.”

Albrecht, Zak Irvin and Ricky Doyle are all ill, and LeVert may have sprained his ankle — he reportedly left the arena on crutches — so the Wolverines will likely rely on Abdur-Rahkman plenty in the near future.

Should we expect him to suddenly be a reliable player based off Saturday? Probably not — just look at Dawkins, who has been scoreless in three of five games since his 20-point outburst against Illinois.

But on a night when Michigan desperately required a win, Abdur-Rahkman delivered. And that’s exactly what the Wolverines needed.