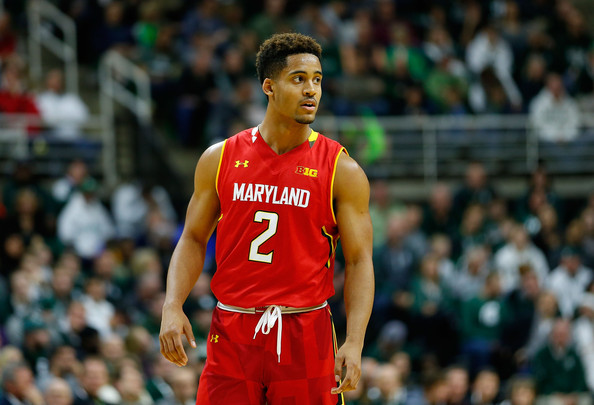 This week’s Big Ten Power Rankings feature a strength of schedule visualization, a look at some of the best mid-range shooters in the Big Ten, a defense that forces mid-range shots and much more. The Badgers handled Nebraska with relative ease on Thursday, coasting to a 15 point win in their first test without point guard Traevon Jackson. Wisconsin has the ugly loss at Rutgers and hasn’t played the most difficult schedule early on, but is still the class of the league at this juncture.

One thing we love about Wisconsin’s front court, they have a pair of great mid-range jump shooters in Frank Kaminsky and Nigel Hayes. Hayes shoots 55% on mid-range jumpers, making him the class of the conference. Here’s a scatterplot of ranked mid-range shooters across the country from high-major teams, via ShotAnalytics, with notable Big Ten players labeled.

Maryland sits at the top of the Big Ten standings because of its stifling defense. The Terrapins are surrendering just .9 points per trip in league games which is .09 points per trip better than Michigan State, which has the league’s second best defense.

While the Terrapins have the best defense, the offense has still been a work in progress and is sandwiched between Penn State and Indiana at eighth in the league in offensive efficiency. While the Maryland offense isn’t great, the Terrapins certainly love the corner three. The following graph from ShotAnalytics shows that Maryland shoots more corner threes than anyone in the league other than Michigan and only Indiana is more effective on those shots.

Last week I ripped the Hawkeyes, this week I’m going to praise them. Iowa has played a very difficult schedule and other than a disappointing home loss to Michigan State, it has positioned itself well for a stretch run.

The Hawkeyes have already won two road games and swept Ohio State, cementing themselves in the No. 3 spot in the power rankings. If we visualize the strength of schedule in games played thus far, Iowa should be ecstatic with a 4-1 record because it just navigated the most difficult portion of its schedule.

Bringing back a feature from last year’s Power Rankings, the next heatmap attempts to illustrate the scheduling ups and downs in each team’s season. Each box is shaded based on the opponents’ KenPom ranking, with a heavy 50% weight applied to road games.

Tom Izzo has never been one to shy away from telling it like it is and he’s been quick to point out that (once again) he’s been forced to use some unique lineups this season due to injuries. Izzo’s references to having “weird guys” on the floor have turned into something of a Twitter meme, so we crunched the numbers.

Have the Spartans been more injury plagued than other teams in the league? One things for certain, Izzo has struggled to settle on a starting lineup. Only Maryland has used more starting lineup combinations than the Spartans this season (data via KenPom). Indiana is starting to pull away from the rest of the Big Ten’s middle tier with two quality road victories at Nebraska and Illinois. The Hoosiers struggled to find their offense early on in Big Ten play, but exploded at Illinois with a 1.20 point per trip performance in a dramatic 80-74 win without big man Hanner Perea. Indiana’s defense is a concern, but the Hoosiers look to be in great position to separate themselves from the wash in the middle of the conference.

Extra possessions are the name of the game and Ohio State has generated more of them via the turnover than anyone else in the Big Ten. The Buckeyes value the basketball fairly well and, more importantly, they turn teams over more often than anyone in the league. The numbers say that Purdue is right there, but it has to prove it sooner than later. The Boilermakers have wins over Minnesota, Michigan and at Penn State with losses to Maryland and at Wisconsin. There’s nothing to be ashamed of with their (in-conference) resume, but there’s not a whole lot to brag about either. The next four games will be critical to determine whether Purdue is a NCAA tournament contender or a pretender. The Boilers travel to Illinois, host Iowa and Indiana and then travel to Northwestern.

Last year Nebraska had a brutal start to Big Ten play, losing five of its first six games, including four on the road, before rebounding down the stretch as the season let up. This year the Cornhuskers are off to an average 2-3 start, but the schedule appears to get more difficult rather than easier down the stretch. Nebraska still has to play Maryland twice, host Michigan State, Wisconsin and Iowa. and travel to Ohio State – a daunting task which leaves little margin for error.

This is a condensed version of the strength of schedule graph above that summarizes the strength of games played, the strengths of games remaining and every team’s current efficiency margin. The result is a scary graph for Nebraska fans:

Michigan is 19-3 in January Big Ten games over the last three seasons (including this January). If the Wolverines want to make the NCAA tournament this year, they might need to make that 23-3 before the calendar rolls into February this season. Michigan travels to Rutgers before hosting Wisconsin and Nebraska to close out the month.

Winning two of those games might have seemed possible, probable even, until Sunday’s news that Caris LeVert would be sidelined for the remainder of the season after injuring his foot during the final play of Michigan’s win over Northwestern.

The loss of LeVert could be a crippling blow for the Wolverines and is we they fell so far in this week’s power rankings. It would take a minor miracle now for Michigan to finish over .500 in the conference after losing its leader in points, minutes, rebounds, assists, steals and blocks per game.

Win probability graphs like this lead to an unhappy season (via KenPom):

Most projected Rutgers to finish in the conference’s cellar, but the Scarlet Knights already have two conference victories and boast the league’s fourth best defense. Unfortunately, Rutgers is also the most offensively challenged team in the Big Ten, averaging .93 points per trip despite a 1.2 point per possession outburst against Wisconsin.

The Gophers finally picked up a conference win against Rutgers and still have a chance to turn their season around. Minnesota’s next five games are at Nebraska, vs. Illinois, at Penn State, vs. Nebraska and vs. Purdue. KenPom gives the Gophers at least a 49% chance at winning each one, a streak which could get them back into the NCAA tournament conversation.

In soccer, Northwestern’s defense would be referred to as parking the bus. The Wildcats have the fourth best 2-point defense in Big Ten games thanks to an approach designed to funnel opponents into mid-range jumpers. Fundamentally it’s a sound approach, but it hasn’t been enough to mask Northwestern’s other defensive warts.

Here’s a plot of the percentage of defensive field goal attempts in the mid-range against the percentage made, which shows the Wildcats are the best in the league.

Fouling up three is statistically the correct move, but Penn State got everything wrong on Saturday. The Nittany Lions allowed Purdue to tie the game after the Boilermakers missed both free throws, grabbed the offensive rebound and made a three-point shot. Nothing comes easy when you haven’t won a league game all season, but that loss will sting for a while in State College.