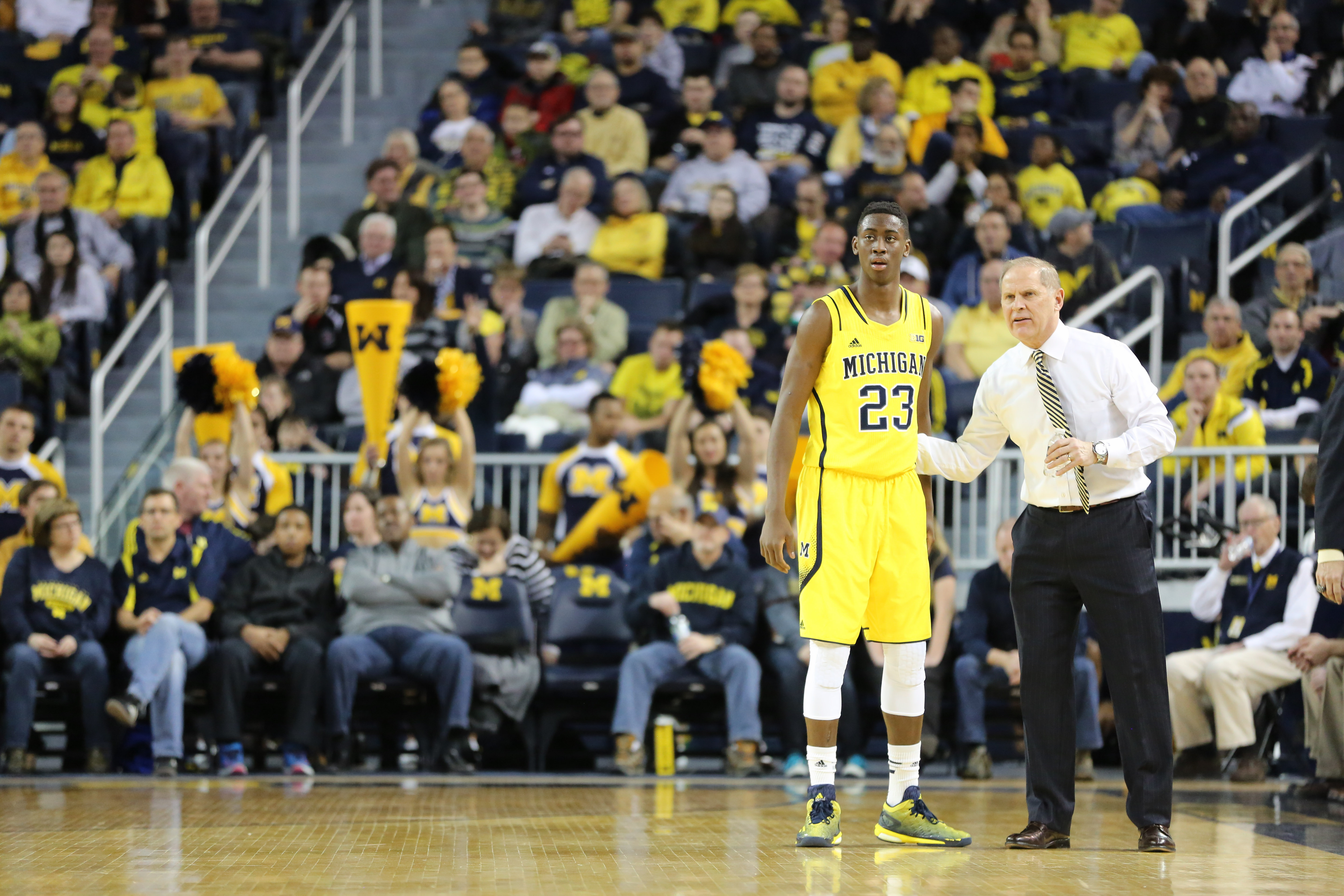 Michigan lost Caris LeVert to a season-ending foot injury over the weekend. Here’s a look at what that means for Michigan over the next two months.

Michigan dealt with just one serious injury over the last three seasons.

Other than Mitch McGary’s back injury last season, the Wolverines stayed healthy and consistent.

The fact that players like Trey Burke, Tim Hardaway Jr., Nik Stauskas and Glenn Robinson III stayed healthy throughout their careers was why Michigan was able to accomplish so much.

The injury good fortune appears to have run out.

First it was freshman forward DJ Wilson, who was sidelined with a broken pinky finger in the summer and suffered a knee injury early in the season. Wilson played in four games this season and is expected to take a medical redshirt.

Sophomore point guard Derrick Walton suffered a turf toe injury in the waning moments of Michigan’s five point loss to Villanova. That injury in Michigan’s fifth game of the season has plagued Walton’s explosiveness, confidence and ability as he’s suffered through a mediocre sophomore season.

In early December, the Wolverines announced that Spike Albrecht was suffering through an ‘undisclosed lower leg injury’ and had decided to play through the season rather than undergo surgery in the summer.

On Saturday, Michigan was without Albrecht — the first game that he missed during his organized basketball career — due to an upper respiratory infection while Ricky Doyle was limited to just 10 minutes with similar issues. After the game John Beilein announced that sophomore forward Zak Irvin was also battling illness and had been on medication for the last three days.

But the most devastating blow came in the closing seconds of the Wolverines narrow victory. As Michigan buckled down and picked up a critical stop to win the game, Caris LeVert rolled his foot in the aftermath. LeVert slapped the floor in frustration, limped to do his postgame television injury and left the stadium on crutches.

Fifteen hours later it was announced that he would undergo foot surgery this week and miss the remainder of the season. LeVert injured the same foot that he had surgery on in May and will be forced to go through a similar 12 week period of rehabilitation and recovery.

Simply put, LeVert was everything to the 2014-15 Wolverines. He led the Wolverines in points, minutes, rebounds, assists, steals and blocks and was the only consistent creator on an otherwise one-dimensional roster. In Michigan’s 56-54 win over Northwestern, LeVert scored or assisted 14 of Michigan’s 20 made field goals, including all but one make in the second half.

The 2014-15 Wolverines were always a flawed team, but there was still a chance that they could fight their way to a surprising NCAA tournament berth despite a disappointing December. The injury to LeVert might just be the knockout punch for a season that was already teetering on the brink.

LeVert’s announced 12 week rehabilitation means that he’ll be healthy this spring and will have to make a serious decision about his future. The 20 year old junior can return for his senior season at Michigan and prove he’s healthy or make jump to the NBA before his foot becomes a more serious concern.

NBA scouts and analysts agree that LeVert had a disappointing season, but still project him somewhere in the mid-to-late picks of the first round or early in the second round.

In the long-term, LeVert’s injury could provide an invaluable opportunity for Michigan’s roster to adjust to new roles and grow up, even if it’s not in the way that anyone imagined.

It’s ‘next man up’ for Michigan, and the young players on this roster have no choice other than to embrace the opportunity.

Walton has seemed content to defer for the first year and a half of his career. He’s hit some big shots, but he’s never been the sort of ball dominant point guard that Michigan’s offense featured with Trey Burke and Darius Morris. The next two months might be as important for Walton as anyone else on the roster. Sooner or later, this was always going to be his team. Now LeVert’s injury has accelerated that time frame.

Albrecht might be the most natural facilitator left on the roster. Albrecht can distribute the ball and knock down shots when he’s clicking, but he’s not a two-point scoring threat, he’s a defensive liability and he’s already been playing major minutes. His leadership and understanding of the offense will be most important as he’s now the Wolverines’ most experienced player.

Abdur-Rahkman is coming off the best game of his career and now could be a starter for the next 12 games. He’s undeniably rough around the edges, but he’s now Michigan’s third and final primary ball handler. He’s not ready to play 30 minutes per game at this level, but the Wolverines will hope that the experience he gains helps him be ready for next season.

Aubrey Dawkins has hit some big shots for Michigan, but he has just one assist to his name in 144 minutes of game time. He’ll play significantly more minutes, but hasn’t shown the ball skills that Beilein’s offense requires on the wing.

Zak Irvin’s season has gone into a tailspin over the last month. He’s struggling with his shooting stroke and his effort and hasn’t shown any signs of being the sort of creator that can replace some of LeVert’s production.

Kameron Chatman, Michigan’s highest rated incoming recruit, has also struggled. He doesn’t have the athleticism to finish around the basket and has gone from starter to bit player off the bench over the course of the season. Chatman has clearly struggled this year, but his 18 assists are still more than Irvin, Abdur-Rahkman and Dawkins have combined.

No one in that group has shown the ability to replace things that LeVert brings to the table. This isn’t a roster that’s prepared to go on the road and beat Maryland or Michigan State. There will be bumps in the road, but there’s an opportunity for the Wolverines to lay the groundwork and foundation of the program for years to come.

How Michigan’s unproven players respond to this adversity will say a lot about their futures in Ann Arbor. Sink or swim, Michigan’s young players are going to be thrown into the fire.

LeVert might be back next season or he might be in the NBA, but the rest of Michigan’s roster will be back and this is their chance to prove what they can bring to the table.