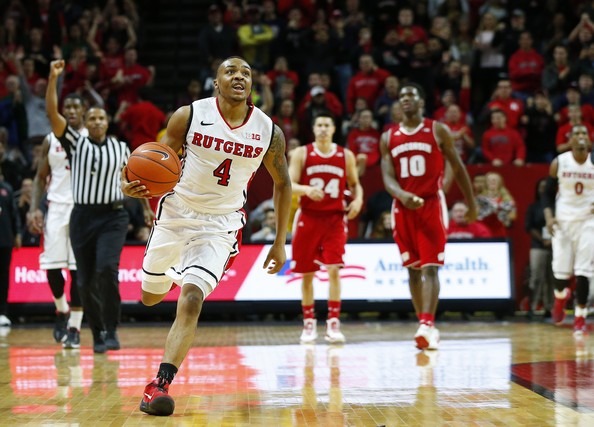 Michigan gets its first taste of life without Caris LeVert this evening and is expected to have limited reserves on hand. The injury report also features Derrick Walton (turf toe), Spike Albrecht (sick), Ricky Doyle (sick), Kameron Chatman (knee), Zak Irvin (sick) and DJ Wilson (knee). The Wolverines are wounded and shorthanded, but still have one of their best remaining opportunities to steal a road victory of the season.

The only Michigan players to have started a game this season that aren’t facing some sort of injury or ailment are Muhammad-Ali Abdur-Rahkman and Mark Donnal.

The Wolverines are wounded and shorthanded, but still have one of their best remaining opportunities to steal a road victory of the season. Rutgers has exceeded expectations this season, knocking off Penn State and Wisconsin at home, but this is also the same team that lost to St. Francis, Northwestern and St. Peter’s at home this season.

Scoring points has been a difficulty for a Rutgers team that has managed a Big Ten-worst .93 points per possession in league games. The Scarlet Knights are the worst shooting team in the league with a 45.2 eFG% in Big Ten play, knocking down 44.7% of their twos and 31% of their threes. The Knights only attempt 26.9% of their field goals from long distance, the smallest ratio in the conference. Turnovers have also been a problem for Rutgers, which gives the ball away on 21.1% of its offensive possessions — second worst in the league.

Despite the ugly offensive numbers, Rutgers has still managed a handful of Herculean offensive efforts including a 1.2 point per possession outburst against Wisconsin and a 1.1 point per possession outing against Minnesota on Sunday. The Scarlet Knights scored 147 points in 129 possessions in those two games – 1.14 PPP – but managed just 207 points in 255 possessions – .81 PPP —  in their other four Big Ten games. Minnesota and Wisconsin aren’t the best defenses the league has to offer, but it’s clear that Rutgers is at least capable of getting something going when it gets hot.

Defensively, Rutgers has been surprisingly effective. The Scarlet Knights are allowing just 1 point per possession in Big Ten play, fourth best in the conference.  Rutgers doesn’t force many turnovers and is just average on the defensive glass, but it has solid defensive field goal percentage splits: 49% on twos (7th), 30.9% on threes (4th), 47.9 eFG% (6th). For a Michigan offense that’s had less than 72 hours to adjust to life without its best player, scoring could be a chore in Piscataway.

Mack is a 5-foot-10 lead guard that shoots 49% on twos and 33% on threes. He’s averaging 15 points, five assists, five rebounds and two steals per game and is the catalyst for the Rutgers offense. Mack isn’t the most efficient ball screen player, but he runs a lot of them. He also has the tendency to push the ball in transition and is an underrated catch and shoot player.

In fact, Mack is really the only reliable three-point shooter on the roster. He’s 15 of 41 on three-point attempts in Big Ten games while his teammates are just 10 of 39 from long distance.

Jack is a 6-foot-9 big man that can face up and slash. He’s not a great jump shooter, but he was terrific in Rutgers’ upset win over Wisconsin with his ability to attack the basket. He plays the majority of his minutes at the center position and has the size and versatility to expose slower big men on the perimeter. Defensively, it’s a win when you force Jack to settle for the mid-range jumper, something he’s not afraid to do. If he hits it, fine, but it’s a much better proposition for the defense than letting him attack the cup. Despite Jack’s versatility, he’s not a traditional low post scorer. He’s averaging just .45 points per post-up, which grades out in the 7th percentile nationally according to Synergy Sports. In fact, the Scarlet Knights are the worst post-up offense in the Big Ten and

Junior guard Bishop Daniels is the No. 3 option in the Rutgers offense. The 6-foot-3 guard is a turnover prone slasher and is shooting 44% on twos and 33% on threes this season. Daniels was moved into the starting lineup against Wisconsin and is averaging 11.5 points per game since the move. Freshman guard Mike Williams was sent to the bench for Daniels to move into the starting lineup and he’s the only other Rutgers player with double digit three-point attempts.

Big man Greg Lewis is an above-average shot blocker who does a good job of getting to the line.  6-foot-7, 230 pound big forward Junior Etou is primarily a defensive rebounder and low-usage offensive player. Like almost everyone else on the roster, he’s shooting in the mid-40s on two-point attempts and the low-30s on threes.

Even with Caris LeVert, this game was projected as close to a 50-50 proposition according to KenPom. Pomeroy’s ratings predict at 59-58 Rutgers victory, giving the Wolverines a 47% shot at the upset. Without LeVert (and possibly a number of other players), Michigan’s chances should be even lower, hence the Vegas spread of 3.5 points.