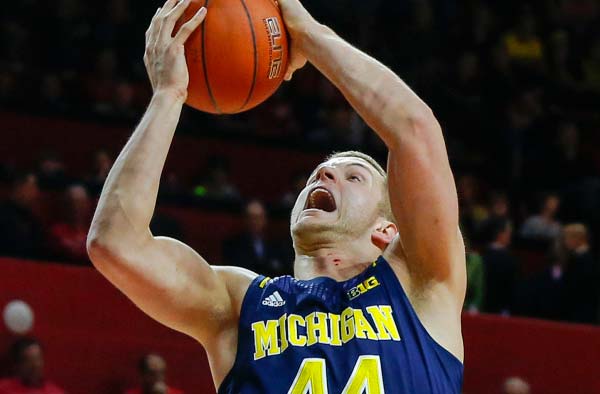 Michigan battled its way to an ugly 54-50 win over Rutgers to pass its first test without injured star Caris LeVert. The game wasn’t always pretty, but the Wolverines showed the depth and toughness necessary to escape with a narrow win.

Four minutes into its first game without its leading scorer, Michigan’s No. 2 scoring option was whistled for his second foul.

John Beilein handled the situation like he has during every other game that he’s coached at Michigan. He put Zak Irvin on the bench for the remainder of the half and let his bench play.

That meant 11 different Wolverines, including two walk-ons, played in the opening half and eight of them found their way to the score sheet. The only one who didn’t register a point in the first half was junior guard Spike Albrecht.

Even if it meant playing a lineup of three freshmen and two walk-ons — Muhammad-Ali Abdur-Rahkman, Andrew Dakich, Sean Lonergan, Kameron Chatman and Mark Donnal — Beilein was going to stick to his principles.

The message resonated through Michigan’s whole game plan and really its plan for the rest of the season. This is how you win games and even if Caris LeVert isn’t here, we’re going to keep playing how we play until good things happen.

Good things were few and far between at times, but Michigan’s fight was always present.

The Wolverine offense still stalled for long stretches. Ricky Doyle was limited by illness, Derrick Walton didn’t make a basket until late in the second half and Zak Irvin continued to struggle with his floor game. The Wolverines still let modest leads slip away amidst frustrating field goal droughts. And Michigan still needed a bit of help from a below-average Rutgers team to come back in the final ten minutes to escape with a victory.

It wasn’t ever very pretty, but the Wolverines figured out how to win. They are now 5-2 in Big Ten play and armed with the belief that they can win games, even on the road and even without the player that led them for the first 18 games of the season.

Michigan’s offense managed only .94 points per trip, but the offense actually generated plenty of clean looks. The Wolverines just couldn’t make them. That’s nothing new for this team, which shot just 39% on twos and 31% on threes for a 42.9 eFG% in the victory. Michigan didn’t do anything particularly well on offense to win this game, they simply kept it close enough to steal it down the stretch.

Defensively, the Wolverines went with a 2-3 zone for probably about half of the game and it was a smart choice against a team that just can’t shoot. Rutgers didn’t move the ball well against the zone and settled for a lot of very questionable shots. I did think Michigan’s 2-3 zone moved and rotated more effectively than it has in other games as the wings did a better job of bumping and recovering to take away the wing three. The 1-3-1 was largely left in the closet, in part because Caris LeVert was critical to the top of the zone and also because Rutgers was content enough to turn the ball over without being trapped and it wasn’t worth giving up an easy basket.

Free throws also made up for the difference in an otherwise even game. Both teams went to the line 14 times, but Michigan made 12 and Rutgers made only 7 in a four point Wolverine victory.

Michigan gave up just .88 points per possession and now has the conference’s No. 2 rated defense in terms of points per possession allowed in Big Ten games. I’m not ready to buy the Wolverine as defensive stoppers — they’ve now played the league’s second easiest slate — but toughness on the defensive end is going to be critical for a group that doesn’t have many reliable offensive options.

Michigan hosts Wisconsin on Saturday and will obviously be heavy underdogs – even if the Badgers lost at Rutgers, they are still the class of the conference – but playing at home this team doesn’t have a lot to lose either.

The value of winning this game at Rutgers is almost immeasurable for a team that John Beilein admitted probably wasn’t even sure they could win Big Ten games without LeVert. Now the Wolverines won’t be chasing their first conference win without LeVert, they’ll be in the much more comfortable position of searching for another.