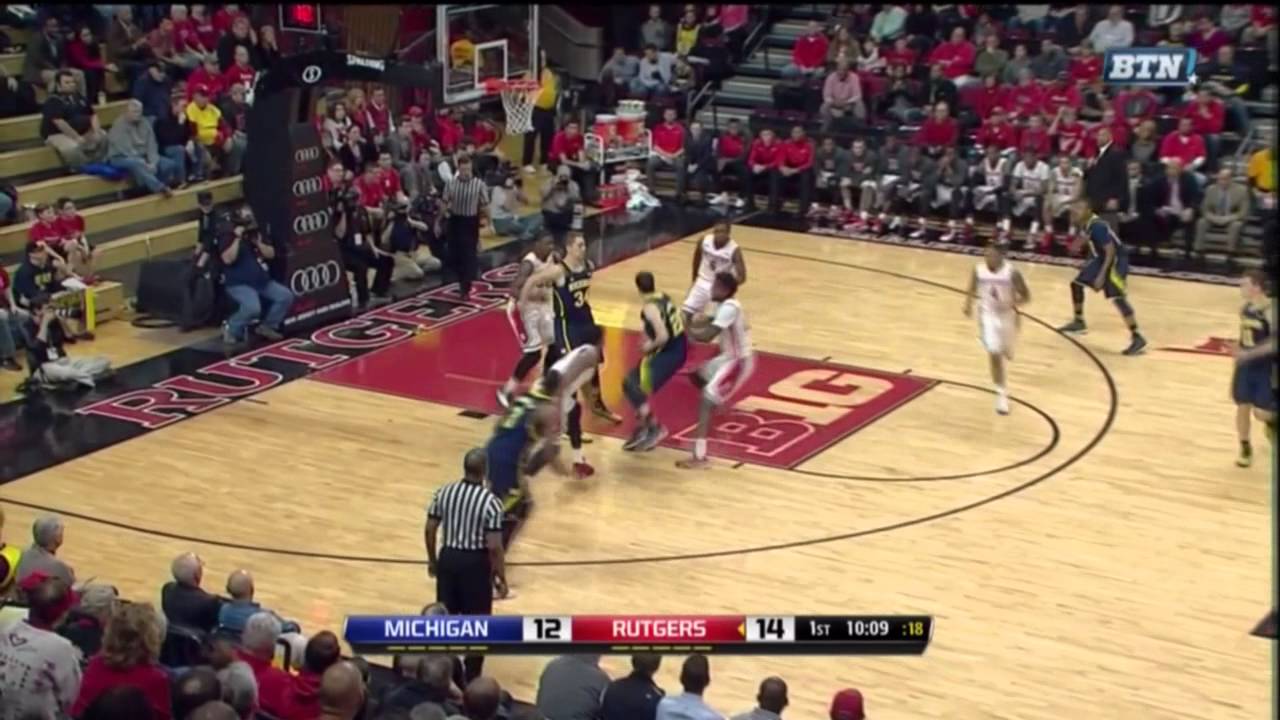 The shorthanded Michigan basketball team made enough big shots Tuesday night to earn a 54-50 win over Rutgers in Piscataway, New Jersey. To see how it happened, check out our Five Key Plays.

The shorthanded Michigan basketball team made enough big shots Tuesday night to earn a 54-50 win over Rutgers in Piscataway, New Jersey. To see how it happened, check out our Five Key Plays.

Zak Irvin picked up his second foul with 16:49 remaining in the first half, meaning the already-shorthanded Wolverines had to compete without one of their only veterans.

Thanks to some clutch performances by lesser-known players, Michigan took a two-point lead into halftime.

A minute after Irvin was subbed out, Kameron Chatman got good positioning on Greg Lewis and scored with a tip-in off a missed three-pointer — a very welcome contribution give Chatman had tendinitis in his knee and ultimately could only play eight minutes.

Later, Muhammad-Ali Abdur-Rahkman’s hesitation dribble on a screen set by Mark Donnal freed the guard for a layup. And when Sean Lonergan checked in, he got on the scoreboard, too, getting around DJ Foreman and taking a jump-step into the paint for a short jumper.

Aubrey Dawkins, who had been labeled the most athletic player on the team as early as this summer, showed off some of his hops with an acrobatic offensive rebound and putback after Spike Albrecht missed a deep three-pointer at the end of the shot clock.

And, with 1:20 left before the break, Donnal nailed an open three at the top of the key — a shot Rutgers left open all night.

By midway through the first half, the Wolverines had played all 11 of their dressed players.

The Scarlet Knights seemed to be taking command with a 15-2 run midway through the second half, and they had a chance to go up by seven, but Myles Mack missed an open three-pointer.

Then, seconds after he just missed an open three, Dawkins cut the deficit to four with a big trey of his own.

After Mack’s miss, Dawkins ran to the left corner, where Walton found him unmarked. Bishop Daniels, the closest defender, didn’t close out in time to impact the shot, and Dawkins buried it to help keep the game within reach.

After the game, Beilein credited this sequence as one of the game’s most important moments, and the coach said he was proud of the way his team responded to the Scarlet Knights’ run.

It wasn’t a promising sign for the Wolverines that their starting point guard didn’t make a field goal until late in the second half, but Walton found a way to make his only two baskets count.

Rutgers’ defense left Walton alone at the three-point arc with six minutes to play, and he knocked down the three-pointer to tie the game at 42. On the play, Myles Mack was slow getting over to the guard because he was focused on Abdur-Rahkman at the top of the key and didn’t realize Foreman had switched off Walton to defend Irvin inside.

Less than two minutes later, Walton gave Michigan the lead with another three. This time, he took a handoff from Bielfeldt, and the moment of separation was just long enough for the sophomore to put the Wolverines ahead for good.

With Michigan clinging to a three-point lead with three minutes to play, Max Bielfeldt made two crucial plays to put his team more comfortably ahead.

When Albrecht missed a corner three, the center grabbed a one-handed offensive rebound over a pair of Rutgers defenders, giving the Wolverines a chance to run the clock down an extra 35 seconds.

But Bielfeldt didn’t need nearly as long. He faked setting a screen, then drifted to the top of the key completely unmarked. By the time Greg Lewis — who was occupied with Walton in the paint — noticed the center, he had pulled up for three.

Bielfeldt stepped up in a game where Michigan needed production at the five spot with Ricky Doyle limited and he battled all game, finishing with 8 points and 8 rebounds in the victory.

Down 48-44 with the ball and a minute left, the Scarlet Knights needed to score, but instead they simply threw the game away.

Bishop Daniels made a good pass to Kadeem Jack in the middle of Michigan’s 2-3 zone, but the fifth-year senior simply missed it, and Albrecht grabbed the loose ball.

Rutgers fouled, but Michigan made all of its free throws to seal the win.