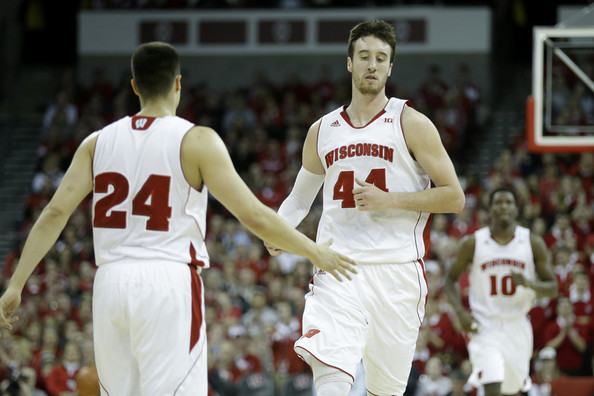 The standings say that Michigan and Wisconsin are only separated by a half game, but in reality the two teams couldn’t be further apart. Wisconsin is a legitimate threat to go back to the Final Four, the odds on favorite to win the Big Ten, and features a National Player of the Year candidate in its starting lineup. Michigan just lost its best player for the season and while the Wolverines have scrapped and clawed their way to a 5-2 Big Ten record, the wins are over teams with a combined 7-26 record.

The standings say that Michigan and Wisconsin are only separated by a half game, but in reality the two teams couldn’t be further apart. Wisconsin is a legitimate threat to go back to the Final Four, the odds on favorite to win the Big Ten, and features a National Player of the Year candidate in its starting lineup. Michigan just lost its best player for the season and while the Wolverines have scrapped and clawed their way to a 5-2 Big Ten record, the wins are over teams with a combined 7-26 record.

The Wolverines will have the excitement of ESPN’s College GameDay and a marquee Saturday night home game to drive them, but will need to play nearly a perfect game on both sides of the floor to have a chance of upsetting the Badgers.

Wisconsin has the best offense in the Big Ten by a wide margin. How good has Wisconsin’s offense been? The Badgers are essentially lapping the competition. Here’s a classic Big Ten tempo free aerial that helps illustrate the league’s best offenses and defenses. The best defenses are toward the top of the graph while the best offenses are to the right.

The difference between Wisconsin’s offensive efficiency (1.28 PPP) and Iowa (1.11 PPP), the league’s 2nd best offense, is the same as the gap between Iowa and the league’s No. 13 offense, Nebraska. Those statistics are likely to even out some (Wisconsin has actually played an easier league slate than Michigan thus far), but they are still mind-boggling.

Right now the numbers say that Michigan has the third best defense in the Big Ten, allowing .981 points per trip, but that ignores the fact that the Wolverines have played the Nos. 3, 6, 7, 9, 10, 12 and 14 offenses in the league. Wisconsin is scoring a ridiculous 1.28 points per possession in Big Ten games and heads to Ann Arbor after scorching Iowa for 1.52 points per possession – in a game where the Badgers turned the ball over once in 54 possessions.

While a 1.6% turnover rate in any game is an absurd stat — especially without a starting point — it’s not surprising that Wisconsin managed it. Wisconsin doesn’t turn the ball over — 12.7% turnover rate on the season — and can shoot the leather off the ball. The Badgers are shooting 56.4% on twos (6th), 35.8% on threes (103rd) for a 55.5 eFG% (15th). While they are only average on offensive glass (31.2 offensive rebounding rate and getting to the line (37.6 free throw rate), it doesn’t really matter when they get a shot every possession and shoot that well

Defensively, the Badgers have shown signs of weakness – especially for a top ten team. Wisconsin’s defense is ranked 9th in the league in points allowed per possession, giving up 1.02 points per trip. The futile Rutgers offense that Michigan held to .95 points per trip scored 1.11 points per trip against the Badgers, their second best offensive performance of the season.

Badger opponents are shooting 50.4% on twos (13th) and 36.5% on threes (9th) in Big Ten games for a 51.5 eFG% (11th). Despite having one of the best frontcourts in the Big Ten, the Badgers have one of the worst two-point defenses. Teams rarely shoot the three against Wisconsin — just 24.2% of Big Ten opponents’ field goal attempts have been threes, lowest in the conference – which is typical of Bo Ryan’s defenses, but the poor interior defense is a red flag at this point in the season.

How dominant has Wisconsin’s offense been? The Badger rotation in Ann Arbor will feature the No. 1, 2, 3, 4, 5, and 7th ranked players in offensive efficiency in Big Ten games.

Frank Kaminsky is arguably the best player in the country. He’s leading the KenPom Player of the Year rankings are his statistical averages are impressive across the board: a 124.9 offensive rating and 27.8% usage, a top 25 defensive rebounding rate, 58% two-point shooting, 40% three-point shooting, top-150 block percentage. Averaging 17 points, eight rebounds, two blocks and two assists per game, there’s not much that Kaminsky can’t do. He loves to play from the right side of the floor whether it’s posting up or picking and popping on the right wing. Kaminsky can score in almost every facet of the game. He’s an efficient low post scorer, he can pick and pop, face up and isolate, and he’s even been making plays in transition pushing the pace. Kaminsky dominated the game in Ann Arbor down the stretch last year and that was against Jordan Morgan. Michigan’s young big men will have their hands full against the All-American on Saturday.

Bronson Koenig  has picked up a starting role while Traevon Jackson has been sidelined by injury and he’s a very underrated lead guard. Like Jackson, Koenig is an effective pick and roll scorer when given the chance and he shoots 53% on twos, 37% on threes and rarely fouls or turns the ball over. He’s not flashy, but he’s more than good enough to lead a team that features as many dominant frontcourt players as the Badgers.

Sam Dekker is stuck in the unfortunate spot of playing alongside the frontrunner for National Player of the Year while wearing the hat of ‘top NBA Draft prospect on his team’. For that reason, it’s almost impossible for Dekker to live up to his billing.  Dekker is averaging 13 points and five boards per game while shooting 62% on twos and 36% on threes, yet some will try to tell you he’s had a disappointing season. Seth Davis has a good take on Dekker here and while he might not put up gaudy numbers he’s capable of sticking jumpers, finishing at the rim and getting on the glass.

Nigel Hayes is easily one of my favorite players in the Big Ten. Hayes is a terrific jump shooter, he’s ranked in the 99th percentile in low post scoring efficiency (per Synergy), he’s nationally ranked in offensive and defensive rebounding rates, and he’s the 20th most efficient player in the country despite using a fifth of Wisconsin’s offensive possessions. He’s going to be a bona fide star in the Big Ten next year after he gets out of Frank Kaminsky and Sam Dekkers’s shadow.

Josh Gasser feels like he’s been around Madison for ages and his named is etched in Michigan fans’ hearts after his dagger three in Ann Arbor back in 2011. Gasser uses only 11.5% of Wisconsin’s offensive possessions, but when he shoots he’s usual open and he usual connects. He’s shooting 59% on twos and 40% on threes this season for a 135.5 offensive rating which is ninth best in the country.

Duje Dukan is a 6-foot-10 senior who shoots 54% on twos and 35% on threes. He’s not a great rebounder, but he’s about as efficient of a backup post player as you’ll find in the conference.

Given Michigan’s current state and some of the recent results against the Badgers – although last year’s game in Madison was one of the Wolverines’ most-impressive wins of the season – it’s tough to envision an upset in Ann Arbor. Ken Pomeroy projects a 64-56 Badger victory