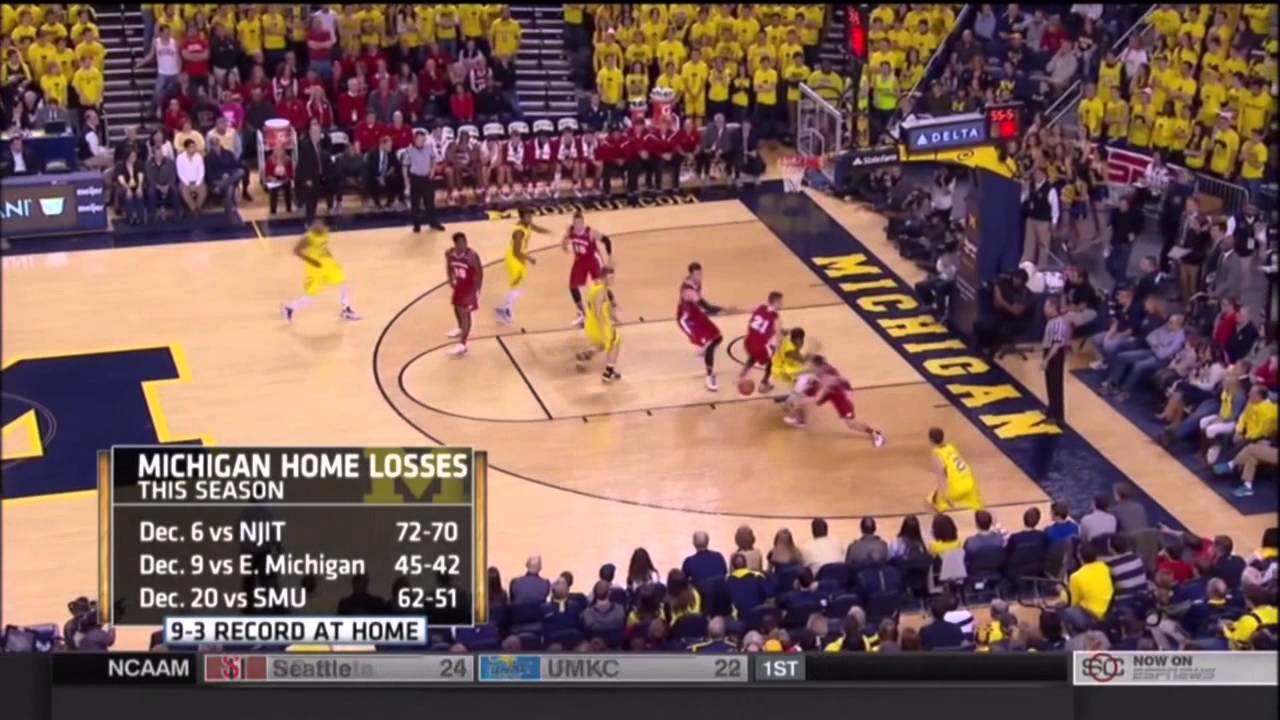 Michigan fought No. 6 Wisconsin to the wire Saturday night at the Crisler Center, but the upset bid fell short. Our Five Key Plays provides a closer look at how the shorthanded Wolverines managed to take one of the nation’s best teams to overtime.

Michigan fought No. 6 Wisconsin to the wire Saturday night at the Crisler Center, but the upset bid fell short.

Our Five Key Plays provides a closer look at how the shorthanded Wolverines managed to take one of the nation’s best teams to overtime.

1) Wisconsin run gives it lead at end of first half

The Wolverines held a slim lead with three minutes remaining in the first half, but a 9-0 run to close out the period gave the Badgers momentum into the break.

Nigel Hayes began the response with an offensive rebound and putback through a foul. No one put a body on the 6-foot-8 forward, and Spike Albrecht’s response to the play is a clear indication of his frustration.

After a Derrick Walton turnover, Sam Dekker exploded with a posterizing dunk over Aubrey Dawkins in transition. There’s not much Dawkins could’ve done there — he was simply beaten down the court by Dekker — but committing a foul while attempting a block meant Wisconsin got another three-point play.

And with the final seconds winding down, Hayes got free again behind the Wolverines’ 2-3 zone. By the time Max Bielfeldt came over to guard the forward, Hayes had pulled up for three, and he drained it at the buzzer to put Wisconsin up seven at halftime.

2) After being down 11, Michigan’s second-half run ties game

There were several times when it seemed as if the Wolverines would let the game get away from them, but they clawed back each time. After being down 11 early in the second half, Michigan answered with a run of its own.

The comeback began with a Zak Irvin three-pointer, a pullup with Hayes in his face. Then, when Wisconsin missed, Muhammad-Ali Abdur-Rahkman made an accurate, lobbed feed inside to Ricky Doyle. The center couldn’t sink a right-handed hook, but Kameron Chatman attacked the rim for a tip-in — over Frank Kaminsky, no less.

Walton made a pair of free throws to cut the lead to four, and then Abdur-Rahkman simply blew by Josh Gasser and laid the ball in off the high glass. The Wolverines completed the comeback with an uncontested layup off the pick-and-roll from Mark Donnal. Duje Dukan and Kaminsky both guarded Irvin, who made the jump pass to the Michigan center to tie the game at 38.

Wisconsin responded with a three-pointer, but then, so did Abdur-Rahkman. Irvin drove into the paint, and Kaminsky and Gasser seemed to have a miscommunication on a switch. That left Abdur-Rahkman open for three, and he buried the shot to force a Badgers timeout.

Irvin and Abdur-Rahkman were both critical to this run with both their shot making and distribution. Both players scored two baskets a piece in the run while setting up three others. Irvin’s assists were also encouraging as the 6-foot-6 sophomore has struggled to find people when he puts the ball on the floor this season.

After the tie at 41, Wisconsin used a quick 7-0 run to regain control of the game. But after a pair of Doyle free throws, two big shots from Irvin brought Michigan back again.

The first shot was a three-pointer at the end of the shot clock. It’s a simple catch-and-shoot, but an impressive shot nonetheless, given that he buried it over the 7-foot Kaminsky.

Then, Bielfeldt’s presence helped give Irvin a bit of separation, and he cut toward the basket and hit a short one-handed pull-up — again over Kaminsky — to bring the deficit to two. The game remained within four points until the end of regulation.

“His game right now is evolving right in front of your eyes,” Beilein said of Irvin, though the coach later criticized the forward’s finishing at the rim. “It’s going to be, you’re going to have to take the thick with the thin right now.”

The Wolverines ran this play just about perfectly. Down three with 10 seconds to play, they needed a three-pointer, and they got one of their best shooters open behind the arc for the shot.

Walton carried the ball up the floor and cut left around a Bielfeldt screen, which Wisconsin switched on. The guard handed the ball to Aubrey Dawkins, who pulled up for three with Kaminsky and Dukan contesting. But Walton was already calling for the return feed, and Dawkins dropped it right back.

Kaminsky — who had switched onto Walton earlier in the possession — was slow to get over, and Walton’s three swished home.

Gasser nearly read the play quickly enough to contest the jumper, but even if he had, it would’ve left Abdur-Rahkman open in the corner.

Given its need for a trey, Michigan ran a great play very well in a clutch situation.

“Every day, we work on that last-second situation,” Walton said. “Aubrey jumped in the air, and both of the guys followed him. He just turned around and found me.”

Unfortunately for Michigan, the thrill of reaching overtime was short-lived. Wisconsin scored the first six points of the extra frame, and the game never seemed in reach afterward.

On their first possession of overtime, the Badgers worked the ball inside to Kaminsky, who burned the Wolverines with a three-point play. Upon receiving a pass at the free throw line, the 2-3 zone’s weak spot, Kaminsky faked a pass back out, which fooled Abdur-Rahkman. That left the Big Ten’s best center one-on-one with Doyle, and Kaminsky hit the shot, then the free throw, to put Wisconsin up three.

“[Momentum] changed very quickly,” Beilein said. “We were playing in zone — we put the zone in a couple weeks ago. We made a huge mistake in the zone for him to get the first three-point play. And then on the second one, they sent the ball back. … We made some errors that we can correct.”

After a Walton turnover, the Badgers worked the ball around the perimeter, and Gasser eventually got an open three, which he hit. Wisconsin had gone just 2-for-10 from deep in the second half, but after Gasser’s trey in overtime, Michigan never cut the deficit to less than four.