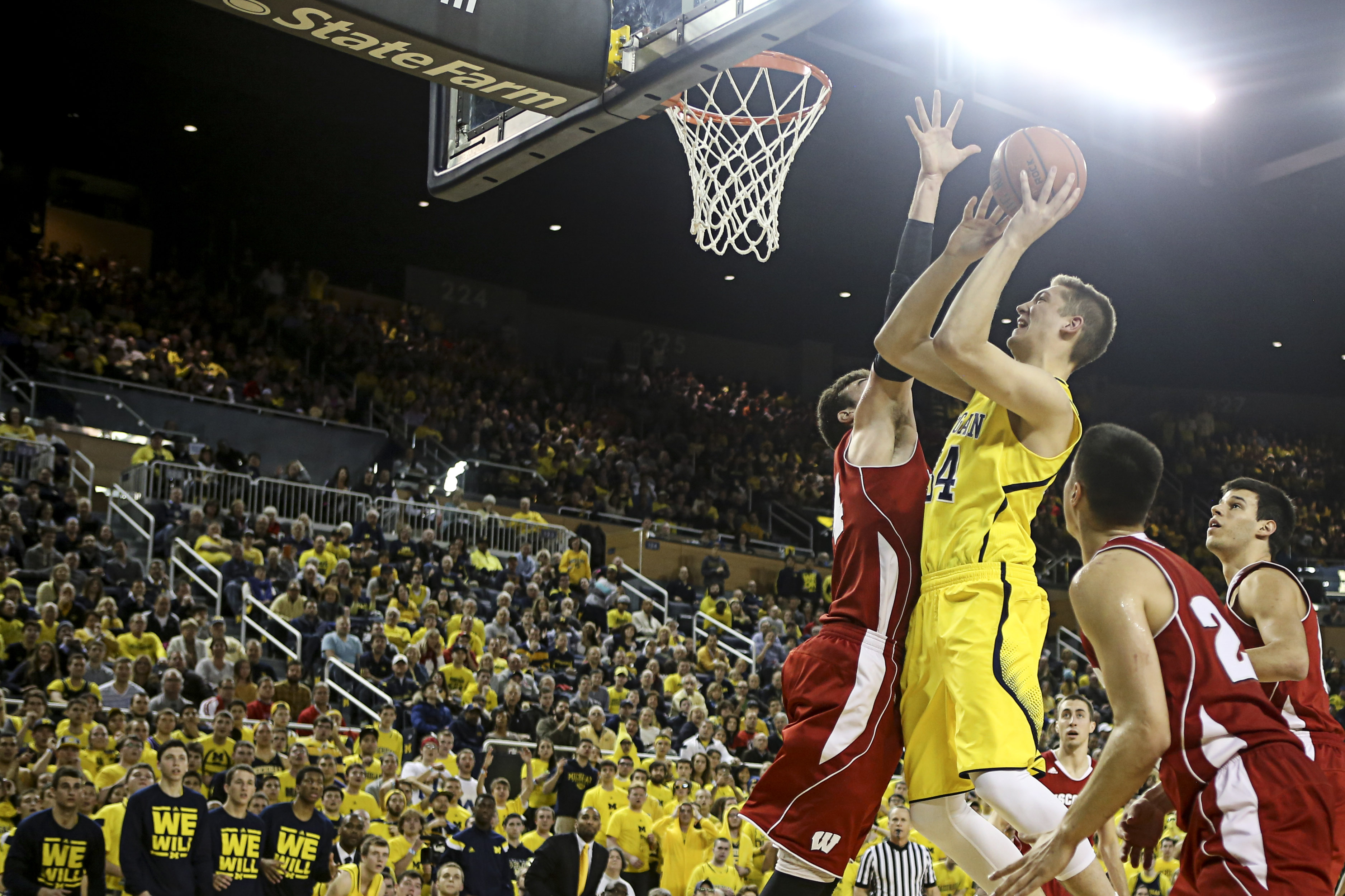 Showcased between ESPN’s powerful video feature on Austin Hatch and Frank Kaminsky’s game-sealing free throws was a young and hobbled Michigan squad going toe-to-toe with the best team in the conference and nearly pulling it off.

John Beilein was blunt when discussing whether Michigan’s 69-64 overtime loss to No. 6 Wisconsin could be considered a moral victory.

“None of us should be happy,” the coach said. “The pats in the back about ‘good game,’ I absolutely hate after a loss. I want them to have that mentality.”

The Wolverines missed several chances to pull off the improbable victory Saturday night at the Crisler Center. A lead late in the first half became a deficit when Michigan went scoreless on five sloppy possessions. When it stormed back to tie the game at 38 in the second half, the Badgers responded with a quick 7-0 run of their own.

Then Derrick Walton Jr. airballed his first shot of the overtime period and committed a turnover; meanwhile, Wisconsin scored six points over their first two possessions to seize control of the extra period.

“I would like to have about 10 to 20 possessions back, both on offense and on defense, to re-teach some things and have some breaks go our way and see if they went our way,” Beilein said.

“We still gotta be tougher in a lot of areas. We could’ve won that game if we had just a little more edge to us.”

He later added, “We still gotta be tougher in a lot of areas. We could’ve won that game if we had just a little more edge to us.”

Michigan delivered an impressive performance, from the electric (and nationally televised) atmosphere to the play of a young team against a veteran powerhouse. It was a day-long infomercial promoting the school and its basketball program, and the stage was set for a grand finale.

But then the Wolverines fell short in overtime — though the packed Crisler Center gave the players an ovation anyway.

A “quality loss” is still a loss, after all.

But showcased between ESPN’s powerful video feature on Austin Hatch and Frank Kaminsky’s game-sealing free throws was a young and hobbled Michigan squad going toe-to-toe with the best team in the conference and nearly pulling it off.

With Caris LeVert, its best player, sidelined for the year due to a broken bone in his foot, and with Spike Albrecht nursing a lingering illness, the Wolverines came within a shot of beating the nation’s No. 6 team.

There was a period in the first half when Michigan had walk-on Andrew Dakich on the court. Then Beilein sent in another walk-on, Sean Lonergan. And there were several times when the tallest player on the court for the Wolverines, despite the Badgers’ imposing size, was 6-foot-7.

“The biggest thing, especially against Wisconsin, is embracing the physicality of the game,” Beilein said.

In the second half, Michigan did that. Abdur-Rahkman hit several big shots, and he was one of the team’s best at cutting into the paint. The trio of centers performed admirably against one of the nation’s best players, too, and they helped the Wolverines rebound 36.7% of their misses.

And while the schedule doesn’t get any easier over the upcoming weeks, Saturday night proved they can play with just about anyone.

It may be too late, and the circumstances may be too immense to reach the NCAA tournament. To find themselves in the NCAA tournament conversation, Michigan would need six wins in its final ten games. It will be tough to reproduce the primetime performance against Wisconsin on a regular basis, too.

But on Saturday, the Wolverines put on a show.