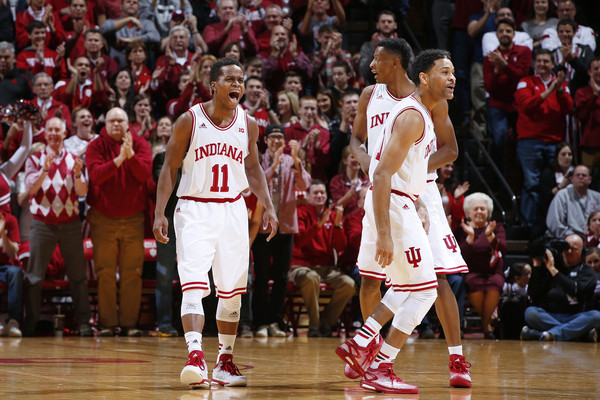 In this week’s Big Ten Power Rankings we examine how far ahead of the pack Wisconsin is, Michigan State’s three-point shooting, Adam Woodbury’s shenanigans, transition offense and more. Wisconsin escaped Michigan with an overtime win, but also obliterated Iowa on Tuesday.

Even without Traevon Jackson and with the shock defeat at Rutgers, Wisconsin is the class of the conference by a wide margin.

Graphing the Big Ten Efficiency Margin chart to the right shows just how far ahead of the rest of the field the Badgers are.

Indiana split games against Maryland and Ohio State this week, but nobody shot the ball quite like the Hoosiers from deep. Indiana was 27 of 47 from three-point for the week – a phenomenon that looks something like this: Indiana’s conference resume is starting to look very solid with a pair of decent road victories (at Nebraska and Illinois) and two nice home wins over Ohio State and Maryland.

It wasn’t a great week for Maryland, which survived a scare at home against Northwestern and lost at Indiana, but the Terrapins should still be a team that competes for the conference crown. The Terrapins only play Wisconsin (at home) and Ohio State once and already swept Michigan State. The big test for Maryland will be this Thursday when it travels to Ohio State in a game that will feature two of the league’s top freshmen – Melo Trimble against D’Angelo Russell – and should be the game of the week in the conference.

The Big Ten gets plenty of criticism for being a slow league (a label that tends to stick around when Wisconsin is the signature team of the conference), but Ohio State is the exception to the rule. The Buckeyes push the ball in transition more often than anyone in the conference.

Given Ohio State’s tendency to get out and push, it was a surprise to see that Sunday’s Ohio State-Indiana game, featuring the two most aggressive transition teams in the league, featured only 62 possessions.

Michigan State is one of the hardest teams to read in the Big Ten. The Spartans have two solid wins over Indiana and at Iowa, but their resume otherwise lacks a lot of punch. That being said, the schedule sets up nicely for them to make a run over the next several weeks.

The Spartans are shooting 39.5% of threes for the season, good for 20th nationally, but have cooled down in Big Ten play. Other than a torrid 70% three-point shooting game at Iowa, the Spartans have been very average from behind the arc in conference games. The following graph shows Michigan State’s three-point shooting by game along with a three-game rolling average in white.

Other than Michigan State, Purdue is the only three loss team with a positive efficiency margin. The Boilermakers defend inside the arc better than anyone else in the league, allowing just a 40.1% two-point percentage, but they are surrendering 47 free throws per 100 field goal attempts — worst in the league.

Nebraska picked up two quality home victories over Minnesota and Michigan State this week, moving up to 4-3 in conference play. The Huskers travel to Michigan on Tuesday in a game that could be decisive to both teams’ conference seasons. Nebraska continues to test just how good defense (.983 points per possession allowed) and awful offense .98 points per possession can take you in the Big Ten. The Huskers are ranked 13th in offensive efficiency and 2nd in defensive efficiency in league play and those numbers aren’t much different than their ranks of 10th and 2nd a year ago.

Sooner or later, playing the worst defense in the league is going to catch up to any team. The Hawkeyes can score the ball as well as anyone in the Big Ten other than Wisconsin, but they just can’t get stops. Iowa has only held one opponent (Nebraska) under a point per possession in league play and has given up an average of 1.2 points per trip over its last five games.

But this week let’s take a look at Adam Woodbury. The 7-foot-1 junior was in the news last week after he poked two different Wisconsin players in the eye, a move which caused a feud between Dan Dakich and Fran McCaffery.

This week, Woodbury’s go-to move during a jump ball, the off arm grab, has garnered attention. Thad Matta pointed this out when the Buckeyes faced the Hawkeyes.

“Iowa does what Wisconsin does. It’s genius,” Matta said on his radio show. “It’s the greatest thing I’ve ever seen.”

Here’s video of Woodbury pulling the move against Ohio State, followed by a follow up performance against Purdue.

Here's video of the opening tip at Iowa. Notice anything out of the ordinary? #buckbk

Give Michigan credit, it played about as well as anyone could have expected in its first week without Caris LeVert. A win at Rutgers and a close home loss to Wisconsin probably would have been the expectation with LeVert given how the Wolverines have played this season. That being said, Michigan still doesn’t have a quality win and its schedule is about to get very difficult in a hurry.

Tuesday’s home contest against Nebraska is critical because it’s the only head-to-head meeting between the two teams, which both look like they will be treading water in the middle of the conference this season. According to KenPom.com, it’s also the Wolverines’ highest percentage chance at a victory remaining this year other than the season ending home game against Rutgers.

A 6-3 record is a lot different than 5-4, especially when facing a stretch of at Michigan State, Iowa, at Indiana, at Illinois, Michigan State, Ohio State, and at Maryland.

After starting 0-2 in league play and then losing Rayvonte Rice, Illinois has been able to play .500 basketball despite being shorthanded. With home games against Penn State and Rutgers up next, Illinois has a chance to play itself back to .500 overall before the schedule gets tougher in February.

It’s tough to bounce back from a 1-6 start, but Minnesota needs to start soon. The Gophers head to Penn State on Wednesday before hosting Nebraska for a rematch just 11 days after losing in Lincoln.

They key to both Gopher wins? Andre Hollins. The 6-foot-3 guard has scored a combined 59 points in the two victories while shooting 21 of 33 from the floor and making 12 threes. It’s not easy being a Northwestern fan. The Wildcats have now lost six games in a row the last three have all come down to the final possession. Chris Collins’ team is close, but just can’t seem to get over the hump. The Wildcats led 63-52 with under five minutes to play before a furious Maryland comeback finished by a Dez Wells putback off the glass sunk Northwestern. Penn State finally picked up a conference victory, beating Rutgers at home. The Nittany Lions have let more than a couple games slip away this year in Big Ten play, but left no doubt in a 29 point trouncing of Rutgers.

Rutgers couldn’t beat a shorthanded Michigan team at home on Tuesday and then was blown out by 28 points at Penn State. The upset over Wisconsin was only two weeks ago, but it feels like ages ago for a Scarlet Knight team that has now lost four straight games. Offense is the problem for Rutgers, who managed to score just 101 points in 110 possessions this week.