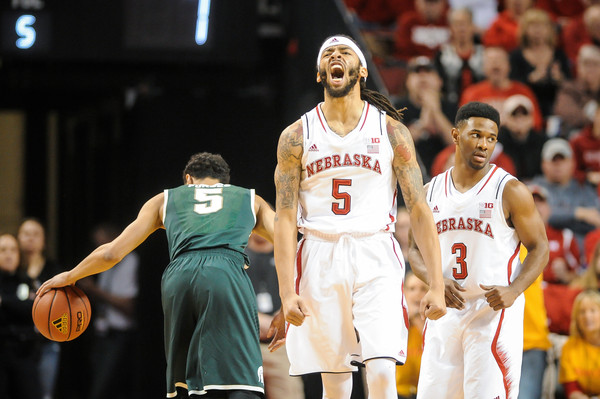 Michigan hosts Nebraska this evening with a chance to bounce back from Saturday’s home loss to Wisconsin. The Cornhuskers have one of the best defenses in the Big Ten, but have struggled to score points this season despite featuring one of the conference’s best wing duos in Terran Petteway and Shavon Shields.

Michigan hosts Nebraska this evening with a chance to bounce back from Saturday’s home loss to Wisconsin. While the result against the Badgers was disappointing, the Wolverines should be able to take some confidence from the fact that they were able to compete with the league’s best team without Caris LeVert.

Games against Rutgers and Wisconsin were enough to re-calibrate expectations and prove that this team is capable of hanging around without LeVert, but tonight’s matchup with Nebraska might be the ultimate test of where Michigan’s season will end up. Nebraska is a good team, but a team that also has its fair share of limitations.

Competing in the Big Ten is about winning home games and this is one that Michigan simply has to have. The Wolverines are set to enter a February stretch that features four road games and six games against KenPom top-50 teams. Michigan needs to take care of business at home before the going gets much tougher.

To call Nebraska ‘offensively challenged’ is putting it nicely. The Cornhuskers are ranked 261st nationally in adjusted offensive efficiency. There have been only two teams in the KenPom era (2002-present) that have finished the season with a worse national rating in adjusted offensive efficiency: 2004 Penn State (268th) and 2014 Northwestern (309th).

Nebraska is a decent 2-point shooting team, 51.1% in Big Ten games, but has struggled behind the arc. The Huskers are shooting just 29.9% on threes in league play, third worst in the conference. Offensive rebounding is not a priority for the Huskers, who grab a Big Ten low 22% of their misses. Nebraska does a good job of valuing the basketball, giving it away on just 16% of its league possessions, and also has several players adept at getting to the free throw line.

Despite the generally ugly offensive profile, Nebraska has won four of its last five conference games thanks in no small part to its stellar defense. Big Ten opponents are managing just .983 points per trip against the Huskers, who are ranked 2nd in the conference in defensive efficiency and 10th nationally in adjusted defensive efficiency.

Nebraska’s pack line defense is legit and conference foes are shooting just 43% on twos and 31% on threes against the Huskers. The most impressive aspect of Nebraska’s defense is that it’s able to force turnovers (19.7% of Big Ten possessions) despite playing a condensed defense overall.

The weak spots of Nebraska’s defense are on the glass, where the Huskers are ranked 11th in the league in defensive rebounding percentage, and in the foul category, where it surrenders 42 free throws per 100 field goal attempts. The bad news for Michigan is that those are the weak spots of the Wolverine offense as well.

Wing guard Terran Petteway is the only player in the Big Ten to use more than a third of his team’s possessions in conference games. He’s a volume shooter that flirts with the ‘chucker’ label, but he is more than capable of taking over a game. Petteway is averaging 19.6 points and five rebounds per game while shooting 51% on twos and 35% on threes. His offensive rating is down slightly because his free throw percentage dropped from 82% to 66% this season.

I had Shavon Shields pegged as a break out player last season, but it really took him until the second half of the year to put it all together. Now a junior, Shields is averaging 16.7 points and 6.7 rebounds per game. He’s a terrific slasher and driver, who shoots 54% on twos, attempts 53 free throws per 100 field goal attempts and connects on 85% of his freebies. Shields is also an impressive mid-range shooter, although he hasn’t expanded his range beyond the three-point line quite yet. Here’s his shot chart this season via Shot Analytics. Shields and Petteway combine to use 63% of Nebraska’s offensive possessions in Big Ten games which is the highest combined usage rate by a duo in the league (Melo Trimble and Dez Wells are next at 56%).

The reason why Nebraska is so dependent on its star duo is because Tim Miles just doesn’t have many other quality options. The only other Cornhusker to have played major minutes this season with an offensive rating over 100 is David Rivers, the 6-foot-7 senior who uses only 11% of Nebraska’s offensive possessions and will miss the Michigan game with an injury.

6-foot-10, 237 pound big man Walter Pitchford is the player that was expected to develop into a reliable No. 3 scoring option. Pitchford has had to play major minutes at the five this season, rather than his preferred position of the power forward, but his numbers have regressed significantly across the board. Last year he shot 54% on twos, 41% on threes and 69% at the line. This year he’s shooting just 49% on twos, 31% on threes and 44% on free throws.

He still loves to pick and pop as much as almost anyone in the Big Ten other than Frank Kaminsky, but he’s just not connecting.

Despite some rumors to the contrary, Pitchford is expected to be available against Michigan despite his ejection for a flagrant two foul after elbowing Matt Costello in the face on Saturday.

The point guard spot is manned by 5-foot-9 jitterbug Benny Parker. Parker is a solid defender thanks to his quick hands and he’s the best three-point shooter on the team at 36%. Despite his relatively high percentage, only about a third of his field goal attempts are threes as he prefers to drive and get to the free throw line.

6-foot-2 freshman Tarin Smith has seen an uptick in playing time as the season has worn on. Smith is primarily a slasher and defender.

Big man Leslee Smith missed the first 14 games of the season after tearing his ACL in the spring. Rather than miss his entire senior season, as was feared when the injury occurred, Smith was able to return to action this month. He played 13 minutes or fewer in his first four games, but after an injury to David Rivers and Walter Pitchford’s early ejection at Michigan State, Smith earned 30 minutes on Saturday. Last year Smith was a plus-rebounder and effective post scorer in flashes, but it’s a bit early to judge his play this season in limited minutes.

Big man Moses Abraham missed time this season as well, but the 6-foot-9, 252 pound senior, brings Nebraska some size off the bench down low.

Sophomore Tai Webster was arguably the worst pick on our annual Preseason Big Ten Top 25 list two years ago. Webster was a highly touted guard from New Zealand who failed to live up to the hype last season. This year he hasn’t done much either, but he’s coming off two of the best games of his career including a 13 point effort against Michigan State where he hit two triples and went 7 of 8 at the free throw line in 28 minutes.

Nebraska is the only team in the Big Ten with a shorter bench than Michigan, so don’t expect to see many more faces – even with the absence of David Rivers.

This is a game between two of the conference’s top three defenses and bottom three offenses. Both teams aren’t ashamed to slow the game down to a crawl and this could be Michigan’s lowest scoring game of the season. KenPom projects a 55-53 Michigan victory, giving the Wolverines a 64% chance of picking up the home win.