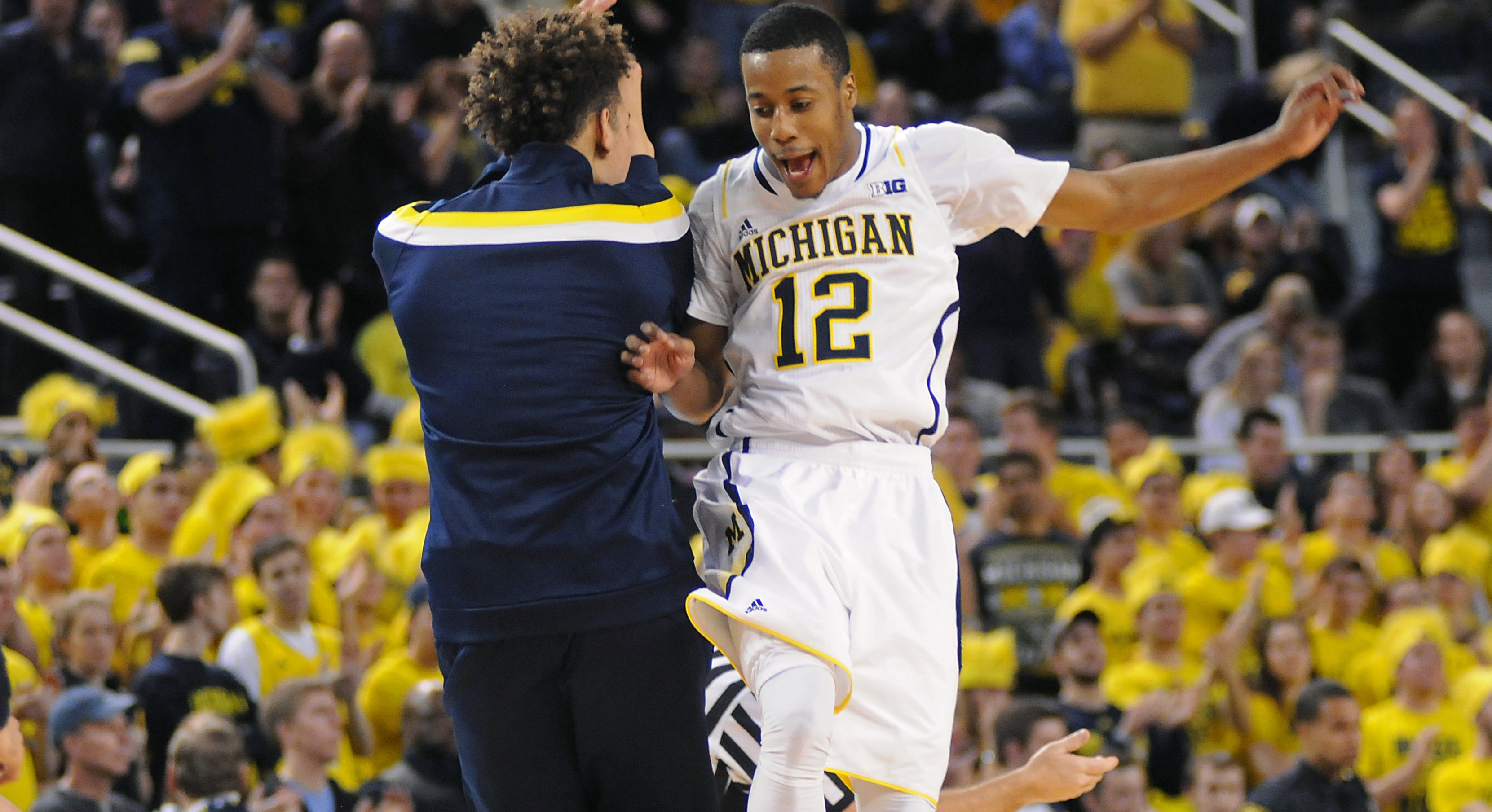 It took 20 minutes, but Michigan finally looked like Michigan again in the second half of its 14 point home victory over Nebraska. Even if the names and faces were still unfamiliar. The Wolverines were without Caris LeVert, Derrick Walton and Mark Donnal, but were still able to knock off the Huskers in a comfortable 58-44 win.

It took 20 minutes, but Michigan finally looked like Michigan again in the second half of its 14 point home victory over Nebraska. Even if the names and faces were still unfamiliar.

The Wolverines were without Caris LeVert, Derrick Walton and Mark Donnal, 60% of their opening day starting lineup this season, but were still able to knock off the Huskers comfortably with a dominant second half.

Michigan’s starting lineup featured Spike Albrecht, Muhammad-Ali Abdur-Rahkman, Zak Irvin, Aubrey Dawkins and Ricky Doyle. That’s two players who didn’t have a high-major offer when Michigan was playing in the Elite Eight last March. But the Wolverines got it done defensively – holding Nebraska to 44 points in 57 possessions – and found timely contributions from a host of unexpected players.

Zak Irvin grabbed a career high 12 rebounds and tied a career high with three assists. Aubrey Dawkins made five jumpers in the first half to keep the Wolverines afloat in an ugly half. Max Bielfeldt came off the bench to score 12 points and grab nine rebounds in 26 minutes. And Muhammad-Ali Abdur-Rahkman, in just his second start, scored 9 points in the second half to jumpstart a decisive 12-0 Michigan run.

There were ugly moments – Michigan shot just 29% inside the arc in the first half – but considering the circumstances this was one of Michigan’s most complete performances of the season. The Wolverines hadn’t beaten a high-major opponent by more than eight points this season, so it was surprising to see them snap that streak with a shortened rotation.

Michigan shot almost entirely jumpshots in the first half and was lucky that Aubrey Dawkins and Zak Irvin were able to hit a few. The Wolverines shot just 29% on twos and 63% on threes in the opening frame and didn’t record a single free throw attempt. Michigan led at the half, but overall the first half offensive performance was uninspiring.

In the second half, the Wolverines started clicking. After scoring only two points in the paint in the first, the Wolverines scored 20 points in the paint in the second. Michigan shot 67% on twos in the final 20 minutes and played with a clear focus on getting to the rim.. While the first half featured jump shots, the second half was more about post ups, passes to the roll man, transition offense and even a few free throws.

Michigan also managed to navigate through a 40 minute game without missing more than four shots in a row – avoiding the cold streaks that have plagued it this season. While the offense started clicking, this game was won with defense.

This was Michigan’s best defensive performance against a high-major opponent since it held Wisconsin to .75 points per possession in a 59-41 victory in 2012. Terran Petteway and Shavon Shields combined for 21 points, six turnovers and 2 assists on 5 of 23 shooting. Some of the duo’s struggles were self-inflicted, but Petteway hadn’t been held to single figures since February 5th, 2014 – the last time he traveled to Ann Arbor.

Nebraska missed 25 of its first 32 shots, a span which stretched well into the second half, and Michigan cleaned up the defensive glass consistently against a Husker team that had little interest in crashing for extra chances.

John Beilein’s zone wizardry was in full effect and the Wolverines shuffled between man-to-man, 2-3 zone and 1-3-1 zone defenses yet again. The 2-3 zone was effective overall, but it was the 1-3-1 zone that flummoxed the Huskers.

Beilein went with the 1-3-1 zone out of the halftime break and the result was a 12-0 Michigan run fueled by Nebraska turnovers, poor decisions and easy Wolverine baskets. The zone didn’t just stop Nebraska’s offense, it got Michigan out in a great position to run and they seized the moment.  A 12-0 run is always impressive, but it’s especially decisive when the halftime score was just 23-18.

The Wolverines lead the Big Ten in points allowed per possession nine games into the conference season.

Nebraska didn’t have the corner three-point shooters to make Michigan pay for gambling in the 1-3-1 and didn’t have the discipline to work the ball into good shot attempts. The Wolverine defense hasn’t always been perfect this season, but the Wolverines lead the Big Ten in points allowed per possession nine games into the conference season.

Michigan is 6-3 in league games, but it’s no secret that the Wolverines six wins are over the teams in the bottom six spots in the standings. Now the Wolverines need to go hunting for quality wins. Their first shot will be on Super Bowl Sunday in East Lansing against a Spartan team that has to play Rutgers on Thursday evening.