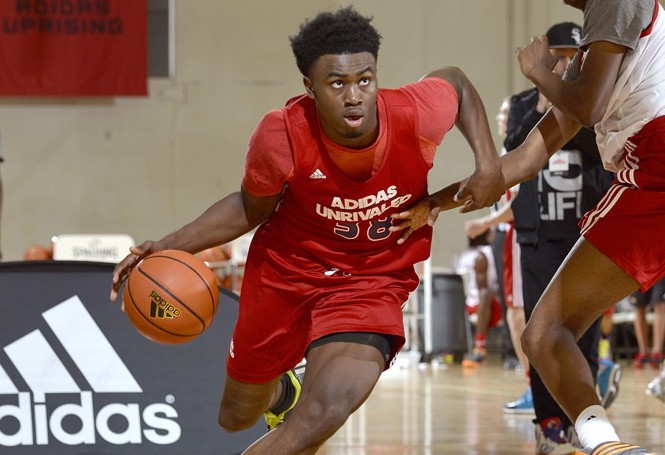 The nation’s No. 2 overall recruit was originally set to visit Michigan for its game against Wisconsin on Saturday, but was forced to reschedule his visit due to a change in his high school schedule.

A new visit date has yet to be set officially, but Brown still plans on making the trip.

“We have a game that got rescheduled for (that weekend),” Brown explained to ESPN. “It was a snow day or something like that so I had to miss it. But I’m looking forward to getting up to Michigan pretty soon and I talked to coach Beilein and he’s ready for me to go so I’m ready too.”

Brown was also asked about the importance of attending an adidas-affiliated school. Of the schools he’s considering, Michigan, Kansas and UCLA are sponsored by the three stripes. While he called an adidas sneaker affiliation a benefit, he insisted it wasn’t the driving force in his decision.

“It doesn’t (matter). It’s a benefit (because) I played on the adidas circuit so going to an adidas school I already have a relationship with the reps,” he said. “But it doesn’t matter for me. If a college in Switzerland was the best fit for me, that’s where I’m going.”

Brown was also selected for the McDonald’s All-American game and has been throwing down posterizing dunks like this throughout the year.

John Beilein is expected to watch class of 2016 forward Rapolas Ivanauskas today, according to Prep Bullseye.

Ivanauskas is a 6-foot-8 forward from Barrington, IL and a four star prospect ranked 122nd nationally according to 247Sports Composite. He holds offers from Iowa and Northwestern, but Michigan has not yet offered.

Michigan has started recruiting class of 2015 big man Levi Cook. Cook stands a massive 6-foot-10, 300 pounds and he’s had a solid season at Hunting Prep. Cook, a former West Virginia commit, has offers from Virginia Tech, Pitt and Drexel and reports that Michigan wants to see his transcripts, presumably the first step toward a scholarship offer.

“Michigan’s involved now, and I’m sure some more new schools will get involved,” he said. “Pitt, Virginia Tech, Drexel, and have all offered me. App. State and East Tennessee State have offered and are recruiting me hard too.”

Michigan: “The thing about Michigan is that they called my coach because they need to see my transcripts, but they’ll offer within the next week or two.”

Jon Teske is Michigan’s only commitment in the class of 2016 and the junior big man is having a solid season for Medina.

“He is near 6-foot-11, runs the floor great, has a nice touch out to 17 feet, and has very good hands,” Scout.com wrote at Dunk 4 Diabetes. “Teske needs to continue to rebound better and play tougher on the interior, but his skill was apparent, and there is no doubt he is just scratching the surface physically of what he will be in college.”

Cassius Winston was in Ann Arbor for Michigan’s narrow loss to Wisconsin and he’s made frequent trips to both in-state schools this season.

Winston has been putting up massive scoring performances early in his junior year including 31 points and five assists in a 56-42 win over DeLaSalle on Tuesday, 30 points against defending state champs Milan and 33 points in front of John Beilein earlier this season.

Mick McCabe profiled Winston and his game in this Detroit Free Press feature earlier this month.

Langford is the highest-rated prospect to have visited Michigan this season, a trip which he said covered everything, and he’s one of Michigan’s top wing targets in the class.

Langford recently had 27 points, nine rebounds, three assists and three blocks in a 72-64 loss in front of Oklahoma State coach Travis Ford. Kansas, Michigan, Michigan State, Alabama, Auburn, Boston College and Oklahoma State are among some of the primary schools involved his recruitment.

Seth Towns has been putting up monster scoring totals at Northland this season. The 6-foot-7 junior broke the 1,000 point scoring plateau this season, netting 22 points in a 43-42 victory over Columbus East.

Thad Matta was in the gym on Tuesday watching Towns while John Beilein has also been in to check on the versatile wing scorer.

Towns went for 47 points and 37 points and 20 rebounds in back-to-back games this season and has been one of the top players in Ohio. Towns’ latest list includes Michigan, Ohio State, Iowa, Purdue, Harvard, Stanford and UCLA. He’s only visited Ohio State this season, but Michigan continues to be near the top of his list according to an interview with Scout.com.

Here are some highlights of Towns in action this season

Beilein checks in on Tyus Battle

John Beilein stopped by the check in on five-star wing guard Tyus Battle when the Wolverines traveled to New Jersey last week to face Rutgers.

Battle has been sidelined with a foot injury this season:

The New Jersey basketball scene is still waiting for Gill St. Bernard’s guard Tyus Battle to make his junior season debut — a foot injury has kept him sidelined through the first five weeks of the season, and there’s no word on when he’ll be ready to play. But the Knights have fared well without their best player, though they have taken some tough losses.

Michigan was once one of the leaders for five-star point guard Derryck Thornton, but the two parties have seemed to drift apart in recent months. Thornton recently visited Kentucky and his next trip up appears to be Duke. The other trips on the docket are Louisville and Arizona.

Thornton didn’t mention Michigan in a recent update and his father recently reported that he “hasn’t heard from Michigan as much” in recent months.

Canadian guard Jamal Murray has been on the Michigan radar for quite some time and the combo guard is now considering reclassifying. Currently a member of the class of 2016, Murray could graduate early and join the class of 2015.

“It’s still in the mix, it’s out there, but we’re not putting any emphasis on it right now,” the elder Murray said of reclassifying. “We are going to see how the season ends and where he is at and where he feels. If it’s a good situation where it makes sense, then obviously [we would reclassify]. But he’s in no rush.”