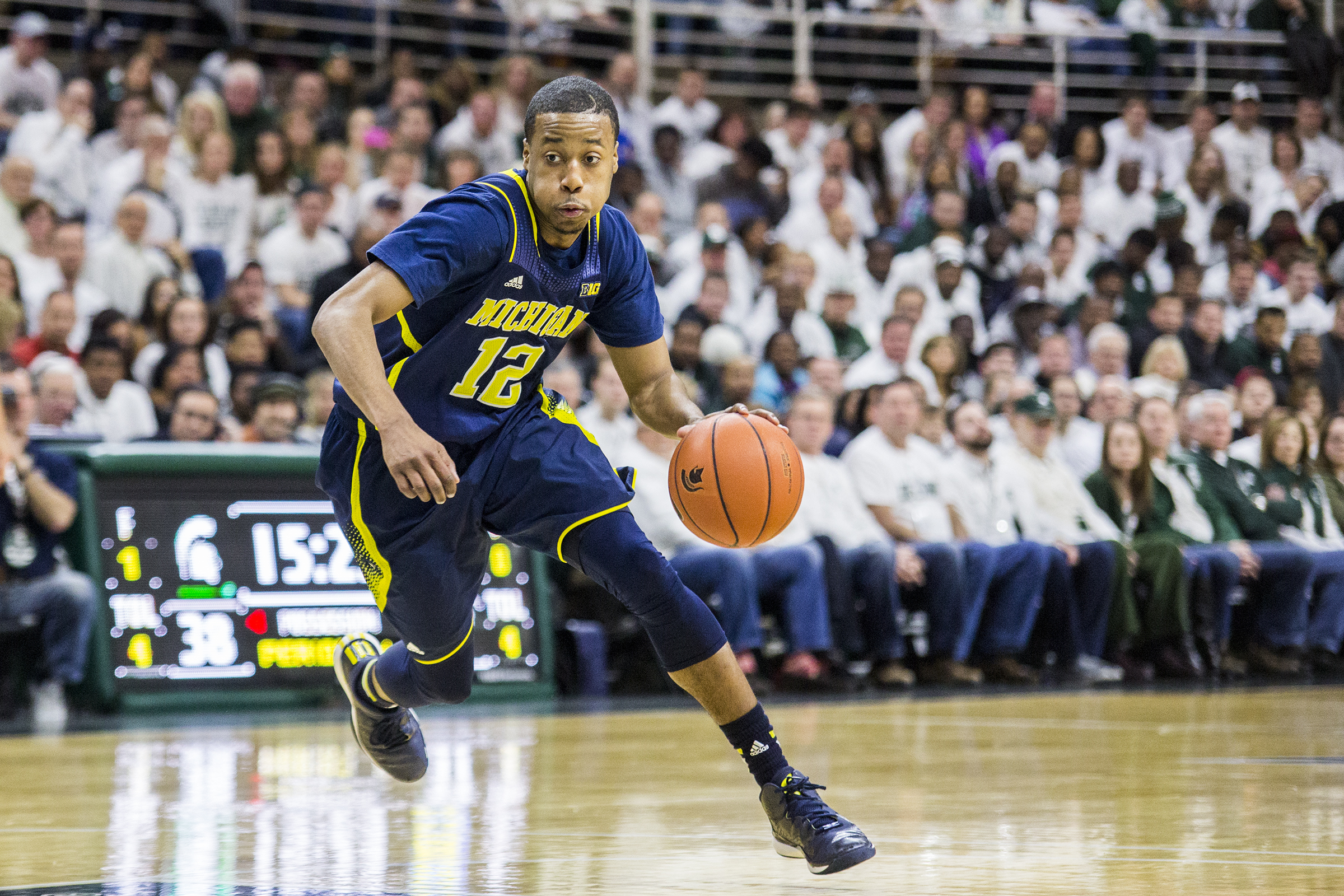 Michigan’s two best players were sitting on the bench in walking boots, but the Wolverines still managed to take Michigan State to overtime at the Breslin Center on Sunday afternoon. While Michigan ran out of gas in overtime, being outscored 10-0 by the Spartans in the extra period, it was an impressive effort from a Michigan team that played two walk-ons and four freshmen in one of the country’s most hostile arenas.

Michigan’s two best players were sitting on the bench in walking boots, but the Wolverines still managed to take Michigan State to overtime at the Breslin Center on Sunday afternoon.

While Michigan ran out of gas in overtime, being outscored 10-0 by the Spartans in the extra period, it was an impressive effort from a Michigan team that played two walk-ons and four freshmen in one of the country’s most hostile arenas.

The fight was impressive, but the end result still wasn’t good enough.

Michigan doesn’t have Caris LeVert and won’t have Derrick Walton for the ‘foreseeable future’, but might have found something in Muhammad-Ali Abdur-Rahkman, who scored 18 points on 8 of 14 shooting.

Over the last two weeks, John Beilein and his staff have learned a lot about their freshmen and have proven that if Michigan scraps, claws and executes it’s capable of competing in almost any conference game. But making the NCAA tournament is still the goal and with each loss that already difficult to reach goal becomes less likely.

On Sunday, the Wolverines were able to ruck up an ugly half – both teams combined for an offensive output of .82 points per trip in the first half – but also showed that they can go shot for shot with their rivals in a shootout. The combined offensive output in the second half was 1.37 points per trip and the Wolverines racked up 42 second half points in just 29 possessions — their most impressive offensive half of the season.

Michigan let another one slip away in overtime, but it also managed to fight to overtime in a game that few gave it any chance.

Gutty overtime losses to Michigan State and Wisconsin count for nothing, unless the Wolverines can figure out a way to turn them into wins later this month. Performances like Michigan received from Abdur-Rahkman, Spike Albrecht, who had 18 points on 6 of 13 shooting, and others were still an encouraging sign that this team can steal some big victories down the stretch.

This game swayed dramatically through each period. The first half was a brutal defensive struggle, the second half was an offensive explosion and in overtime Michigan simply collapsed, being outscored 10-0.

Michigan State managed just a 37.1 eFG% in the first half, but rebounded 42% of its misses and outscored the Wolverines 29-24 in 33 possessions. Michigan started the half hot, but with Abdur-Rahkman and Albrecht on the bench with two fouls, the offense stalled quickly.

Beilein’s decisions to ‘auto-bench’ his players with two fouls in the first half always cause some hand-wringing, but I have a hard time blaming the result on that decision. Albrecht played 37 minutes and Abdur-Rahkman played 32 for the game and Michigan quite clearly ran out of gas down the stretch. Michigan managed to hang around with both on the bench in the first half, and was leading for a large part of the first half, and quickly took the lead back a few minutes into the second half. Abdur-Rahkman and Albrecht played 18 and 20 minutes respectively in the second half and those are clearly the minutes you want them playing.

The second half saw just 29 possessions per team, but Michigan won the period 42-37. The Wolverines scored 1.45 points per trip in the final 20 minutes while Michigan State managed 1.28 PPP with a 78.6 eFG%.

Defensively, the Wolverines improved on the glass but mostly because they only forced six missed shots in the second half. Michigan State shot 86% inside the arc, after making just 24% of its twos in the first half, and 42.9% on threes in the second half and seemed to pick apart whatever defense Michigan chose whether it was man-to-man, 2-3 zone, 1-3-1 zone or a modified more compact 1-3-1 zone with Albrecht at the top of the arc.

The fact that Michigan was able to erase a five point halftime lead despite surrendering a 78.6 eFG% in the second half was impressive, but it was also a sign that the Wolverines might not be able to keep it up.  The overtime period was dominated by Michigan State and seemed to swing when Spike Albrecht missed a wide open straight away three. The shot would have given the Wolverines the lead, but the Spartans just had too much left in the tank and ran away with the game.

There are plenty of positives to take from this loss despite the result and the fact that LeVert and Walton are both not in the equation any time soon. Michigan hosts Iowa on Thursday evening in one of its most critical home games yet. The Hawkeyes have lost three in a row and a win would help keep Michigan above-level before traveling to Indiana and Illinois.