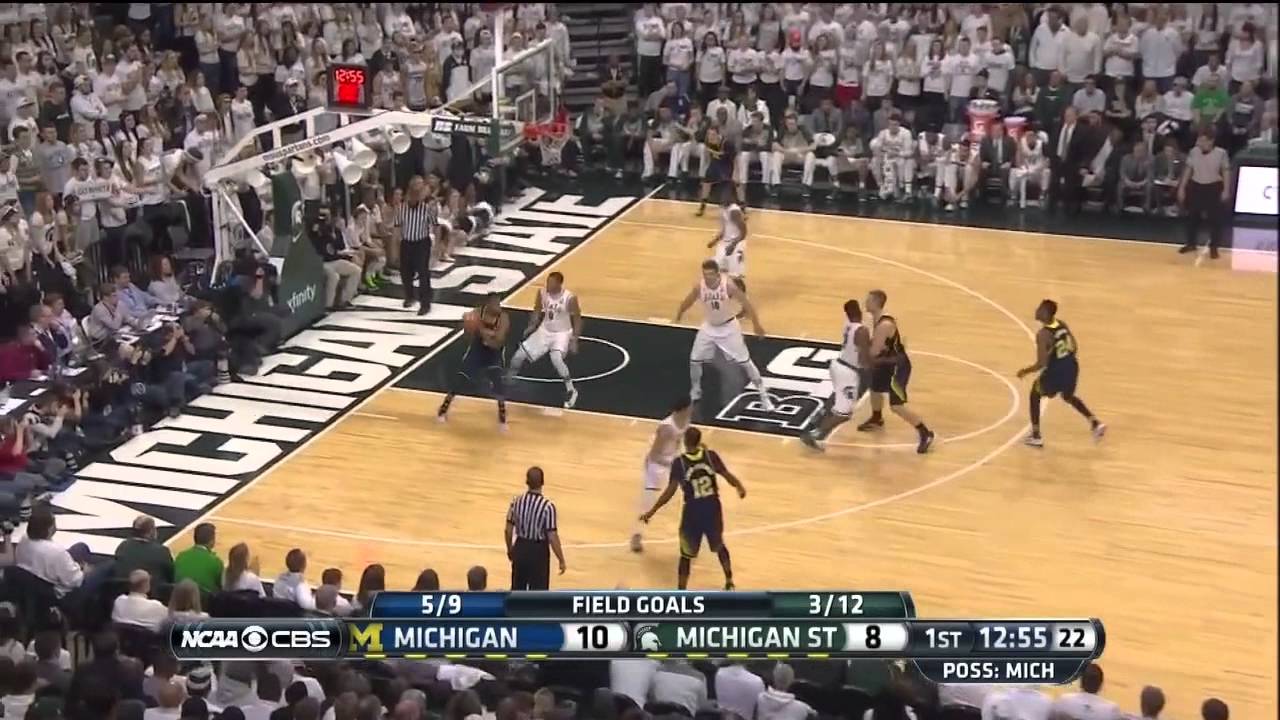 The Michigan basketball team nearly pulled off the improbable, forcing overtime against Michigan State at the Breslin Center despite a pair of major injuries. We take a closer look at Sunday’s game, focusing mostly on the positives.

The Michigan basketball team nearly pulled off the improbable, forcing overtime against Michigan State at the Breslin Center despite a pair of major injuries. We take a closer look at Sunday’s game, focusing mostly on the positives.

The freshman guard enjoyed another productive game Sunday, scoring 18 points in 32 minutes and in general being the Wolverines’ best offensive weapon. He tallied seven quick points in the first half, but foul trouble forced him to the bench early.

Abdur-Rahkman’s first bucket came from just inside the arc. Max Bielfeldt set a screen on Bryn Forbes at the free throw line, and the freshman used the separation to hit a jumper. A minute later, Abdur-Rahkman used his plus speed in transition, carrying the ball up the court and simply blowing by Travis Trice for a lay-in.

Later in the half, the guard hit a pull-up three-pointer, again created by a Bielfeldt screen that the Spartans didn’t switch on. Moments after that, he played the role of distributor, firing a pass inside to the center when two defenders stayed with Abdur-Rahkman at the top of the key.

Things began going downhill for Michigan when Abdur-Rahkman picked up his second foul of the first half about 10 minutes on an apparent push-off while fighting for a rebound. Playing with Andrew Dakich and Sean Lonergan for much of the rest of the half, Michigan was down five at the break.

“Our timing in our offense — not an excuse, please — is off because we have so many new guys out there playing,” John Beilein said. “They’re learning on the fly. That’s why you can’t get guys open sometimes.

“That foul, yeah. That’s for another time.”

Aubrey Dawkins, Spike Albrecht and Abdur-Rahkman earned two fouls each in the first half, limiting Michigan heavily. With the starters back after the break, though, the Wolverines quickly erased a five-point deficit to take the lead.

The scoring began with Michigan getting out well in transition after Michigan State missed a three-pointer. The Wolverines had a two-on-one, and a slick give-and-go between Abdur-Rahkman and Dawkins resulted in an easy layup.

Albrecht followed by hitting a runner — a shot he practices and uses frequently — on a look created via a cut in front of a Bielfeldt screen. Then Abdur-Rahkman attacked the paint again, this time needing no help to drive on Forbes for a turnaround jumper.

Three minutes into the second half, Zak Irvin made a great pass to Dawkins inside for a bucket with the shot clock winding down. And as the Spartans hastily worked the ball back down the court, the sophomore jumped a pass for an emphatic slam to take the lead, and Irvin’s triumphant yell could be heard throughout the silent Breslin Center.

The game remained close throughout the second half, but a pair of big plays gave the Wolverines a four-point lead with five minutes left.

First came a strong move by Irvin to the basket. Getting a pass in the left wing, his shot fake allowed him to attack the paint, where he finished with a jump stop and acrobatic layup around Matt Costello. Then, when Abdur-Rahkman’s three-point attempt rimmed out, no one had boxed out Dawkins, who rose for an offensive rebound and putback. Dawkins finished the three-point play with a free throw to put the Wolverines up 61-57.

The Wolverines looked like they might be in control of the game from that point onward, but tightened up and allowed a 9-0 Spartan run.

Michigan had the ball and a four point lead in the final five minutes and just seemed to tighten up just enough to let the game slip away.

The Wolverine offense stalled out on the first possession with a four point lead, resulting in a deep and contested three-point attempt by Spike Albrecht. Had the shot gone in, it would have extended Michigan’s lead to seven points, instead the Spartans controlled the long rebound and pushed it ahead to Branden Dawson for an easy basket.

With the lead down to two points, Michigan had a couple cracks at scoring on the ensuing possession, but ended up with Muhammad-Ali Abdur-Rahkman splitting a double team and trying to finish at the rim. Matt Costello blocked the attempt and after a Branden Dawson alley-oop, the game was tied.

Michigan State managed to extend its lead to five points and regained momentum and control of the contest heading into the final minute.

Beilein said he saw “the old Spike Albrecht” on the court Sunday, and the junior’s three with less than a minute left dripped with confidence. Albrecht received a pass from Bielfeldt well beyond the arc and pulled up anyway, hitting nothing but net.

Denzel Valentine missed the front end of a one-and-one, giving Michigan the opportunity to win in regulation with a three-pointer. Albrecht tried a contested runner, which rimmed out, but Bielfeldt had attacked the basket from the free-throw line and gained inside position on Branden Dawson. The senior’s first putback attempt rolled off the rim, but his second try went in, tying the game at 66 with 20 seconds to play and eventually forcing overtime.

The Spartans blew the switch, and Albrecht was wide, wide open.

Down two on their second possession of overtime, the Wolverines got a great look for a potential game-changing trey. Bielfeldt set a screen at the three-point line and rolled to the basket, and both defenders — Costello and Trice — went with him.

That left Albrecht alone at the top of the key, but the junior’s shot was slightly too strong.

Dawkins fouled out on the ensuing defensive possession and Costello made both free throws, putting the Spartans up four. The Wolverines tried to respond with a contested three from Bielfeldt (an “ill-advised” shot, Beilein said), but that missed as well.

“We had a couple of good looks that didn’t go in,” Beilein said. “We probably panicked when we got down by six.”

Michigan State scored all 10 points of overtime to walk away with the rivalry win.