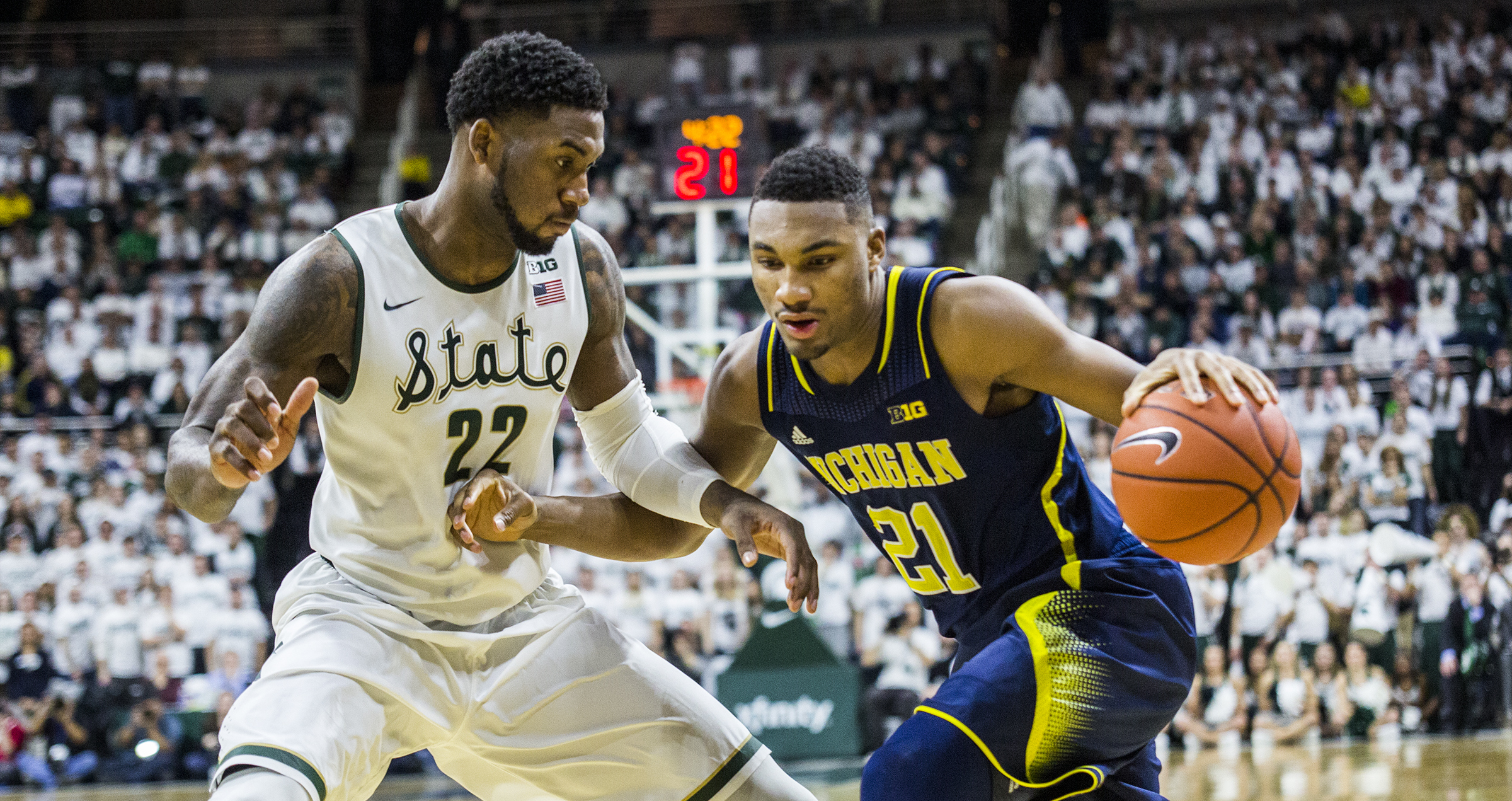 The Michigan basketball team’s season would look much different right now if it had stolen a pair of overtime games rather than lost them. But the Wolverine couldn’t score in the extra period Sunday, and another opportunity for a résumé-building victory slipped through its fingers.

EAST LANSING — Let’s face it: The Michigan basketball team’s season would look much different right now if it had stolen a pair of overtime games rather than lost them.

Both contests were right there for the taking. On Jan. 24, Derrick Walton Jr.’s clutch three-pointer with time expiring against No. 6 Wisconsin forced an extra period, but the Badgers scored the first six of overtime and never looked back.

Then came Sunday against Michigan State at the Breslin Center, when the Wolverines led for large stretches of the second half. The Spartans went on a 9-0 run to go up five with 90 seconds left, but a three-pointer by Spike Albrecht and putback by Max Bielfeldt again sent the game to overtime.

But Michigan couldn’t score in those five minutes, and another opportunity for a résumé-building victory slipped through its fingers.

“We had a couple of good looks that didn’t go in,” explained John Beilein. “We probably panicked when we got down by six.”

The coach was right: The Wolverines had their chances in the added frame. On their first possession, Albrecht was left alone at the top of the key on a botched switch by the Spartans, but the junior’s three-pointer rattled out. On Michigan’s next possession, Bielfeldt took what Beilein later called an “ill-advised three,” which also missed. Couple that with a turnover and a missed free throw on the front end of a one-and-one, and the Wolverines found themselves down six with just two minutes left.

That time, there was no miracle comeback.

“I like to think of it as a really close overtime game instead of the disappointing way we played in overtime,” Beilein said. “But we’ll grow from it. Failure is fertilizer for growth, so we have all kinds of sprinkles of fertilizer out there today.”

There were several spots where the growth was evident. Muhammad-Ali Abdur-Rahkman continued to one-up himself, scoring 18 points in 32 minutes and continuing to establish himself as Michigan’s best offensive weapon — he made plays Beilein admitted he has never seen before from the freshman. Albrecht had a productive afternoon as well, tallying 14 of his 18 points in the second half.

“I saw the old Spike Albrecht back out there,” Beilein said.

But there are areas where there just hasn’t been enough improvement, which Michigan desperately needed with Mark Donnal, Walton and Caris LeVert all out — the latter pair for the long-term. Kameron Chatman still hasn’t gotten his footing at the college level, and Zak Irvin’s adjustment from a three-point sparkplug last year to a starting forward this season hasn’t gone as smoothly as anticipated.

“Your jump shot shouldn’t get blocked,” Beilein said, unprompted, alluding to Irvin. “You should shot fake and go to the basket. Those types of things changed the momentum.”

The sophomore was rejected for a final time with a minute left in overtime and Denzel Valentine scored in transition, effectively ending the game.

The reality is that feeling let down by Sunday’s loss demonstrates how far Michigan has improved this season. The Wolverines ran two walk-ons, two freshmen and a sophomore at the same time for much of the first half and held their own.

Michigan had Michigan State on the ropes, and a season-changing win was right there for the taking.

Instead came the overtime shutout and another disappointment. But until that point, just like against Wisconsin, they sure made it interesting.