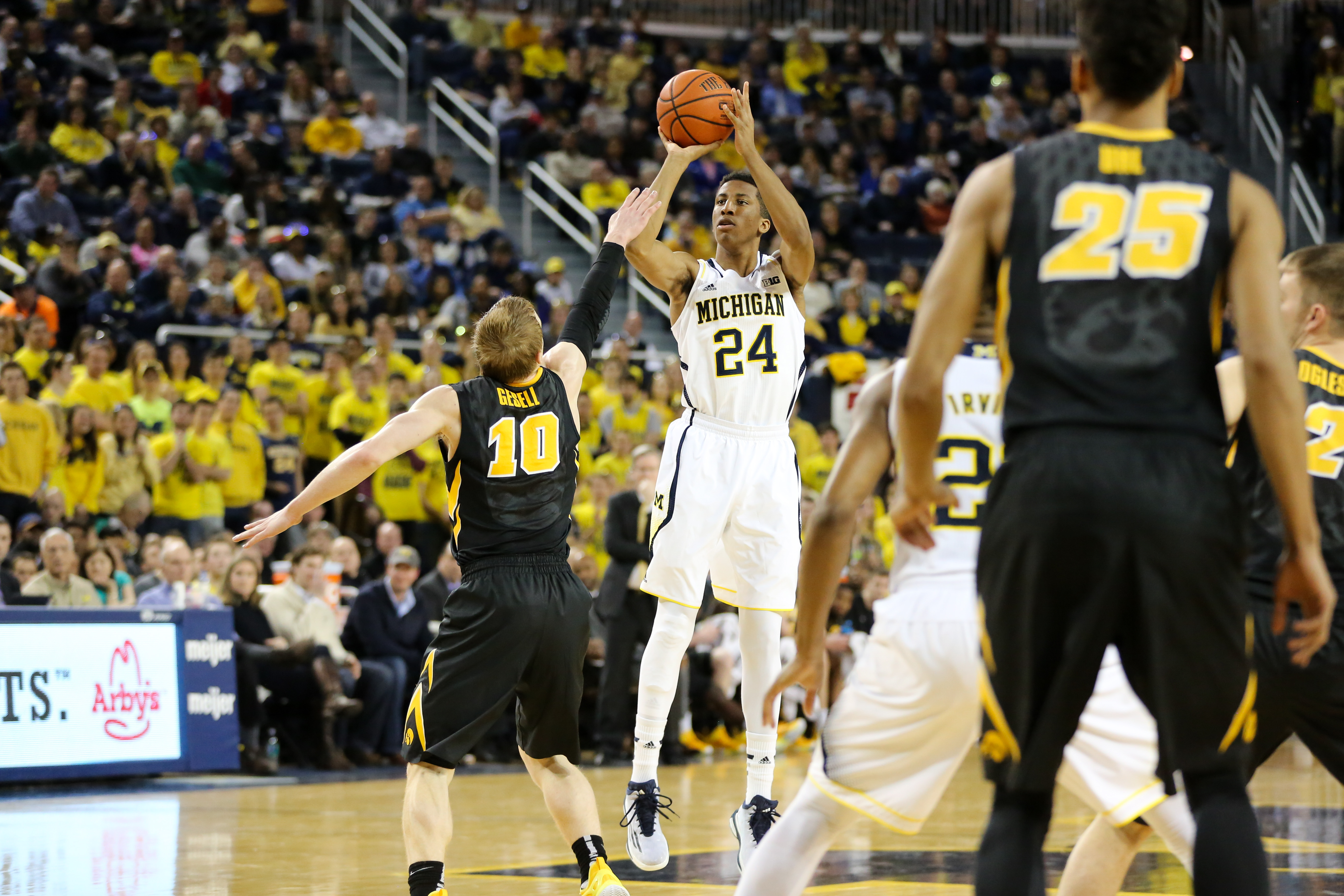 Dawkins had an outstanding 20 minutes, tallying nearly half of the Wolverines’ points — 16 of 33 — in the period. It was the third time in five games that the freshman starter has scored in double-digits.

For a brief moment in the second half of an eventual 18-point loss to Iowa on Sunday, Michigan actually seemed to have a fighter’s chance to mount a comeback against Iowa.

The unlikely became plausible because of Aubrey Dawkins. The freshman forward scored all 16 of his points after the break to lead the Wolverines during a game in which they struggled at both ends of the court.

The sliver of hope came with with 8:12 remaining. Dawkins hit a three-pointer, and suddenly, what had been an 18-point deficit was cut to nine. The Crisler Center recognized the response, roaring with anticipation for second-half theatrics.

But they never came. The Hawkeyes responded with a five quick points on a three-pointer and jumper to stretch the lead back to 14, and Michigan never threatened again.

Still, Dawkins had an outstanding 20 minutes, tallying nearly half of the Wolverines’ points — 16 of 33 — in the period. It was the third time in five games that the freshman starter has scored in double-digits.

Dawkins added he feels better in his “understanding of the game, knowing the offense and knowing my defensive assignments.”

The forward certainly looked comfortable in Michigan’s offense in the second half. He began the frame with a drive to the basket, which drew a foul and earned a trip to the charity stripe, ending more than a seven-minute stretch without a point for the Wolverines.

Following the second of Aaron White’s technical fouls, Dawkins sank his first trey of the night on a feed from Andrew Dakich at the 13-minute mark. He made another four minutes later, then his third — the one that brought Michigan within nine — moments after that.

And although then Iowa pulled away with ease, Dawkins kept hitting. He drove for a bucket and then delivered yet another three late.

“They didn’t really shoot the three-ball well until Dawkins got hot,” said Iowa coach Fran McCaffery. “He was tremendous. I love his game, and he really picked them up when they needed it.”

Beilein had a complaint, though.

“He didn’t block out on the very, very first play. They got a lay-in,” the coach said. “We have talked nothing but blockouts since the Michigan State game. He’s growing in some areas that it’s small bits right now but he’s been successful. … He’s gained confidence that he can at least put the ball in the basket. Now he’s got to grow in some other areas.”

The frustrations also stretched to the rest of the freshmen, who have had difficulties adjusting to the speed of the game, according to Beilein.

Kameron Chatman, for instance, began the night with a baseline jumper, but in the second half, a similar look sailed to the top of the backboard. Even Muhammad-Ali Abdur-Rahkman struggled with Iowa’s size, finishing with 11 points, but on 4-of-10 shooting.

“We’re just grasping for straws — that’s probably a poor word,” he said. “We’re just searching really, really hard to find the best way for us to play as a team.”