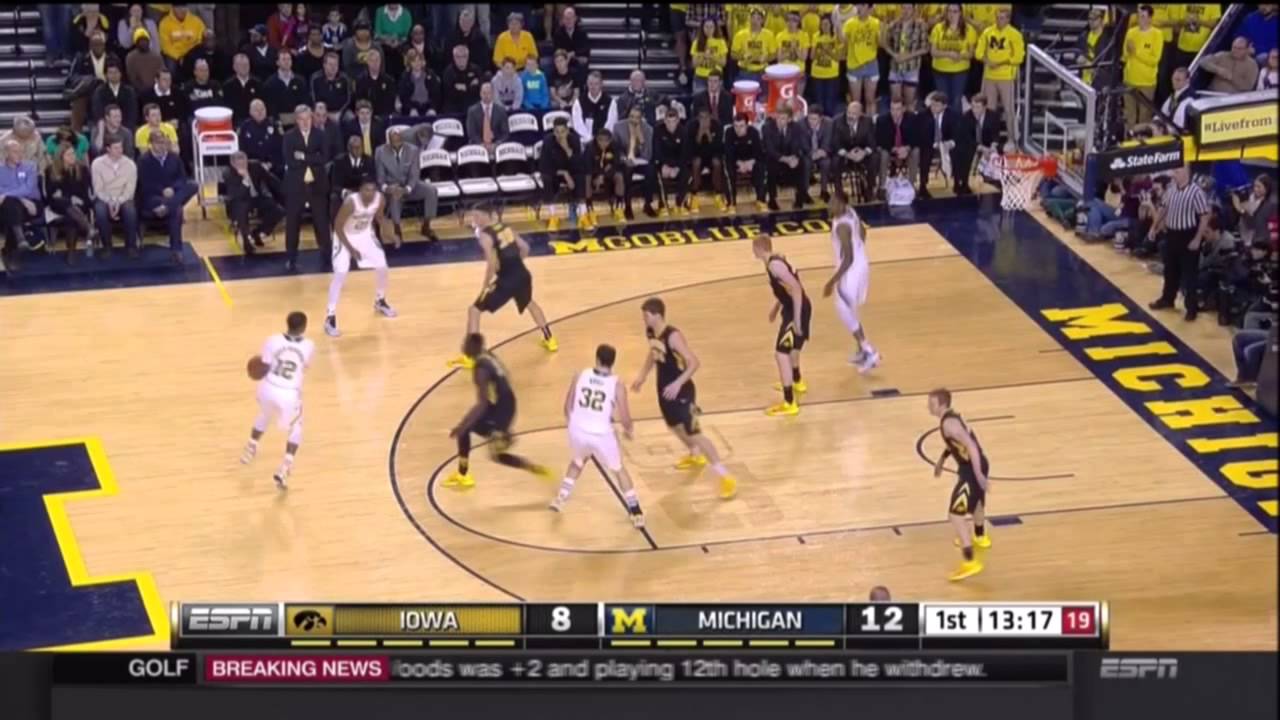 Michigan suffered a deflating loss to Iowa on Thursday, 72-54. We take a closer look at what went wrong for the Wolverines.

Michigan suffered a deflating loss to Iowa on Thursday, 72-54. We take a closer look at what went wrong for the Wolverines.

Kameron Chatman led Michigan in scoring after the first half. Yes, you read that correctly.

The freshman forward had a productive opening 20 minutes, finishing with six points in 11 minutes. His contributions began almost immediately after he checked in for the first time. Chatman drove on Jarrod Uthoff from the corner and got fouled while dropping a pass to Ricky Doyle inside.

Two possessions later, Chatman got on the scoreboard by faking a screen, getting a pass from Spike Albrecht, taking a dribble to the baseline and hitting the midrange jumper. Then, he made a layup off the high glass with the shot clock expiring, using a good burst of speed to get to the basket.

“He’s got to try to do more with less and just try to keep his game simplified,” said coach John Beilein. “I’m really happy for him that he was able to knock down the in-between jump shot to start things out.”

The game changed midway through the first half when Iowa switched to a 2-3 zone, something Beilein admitted he was surprised to encounter.

Michigan had several empty possessions against the defensive scheme as the Hawkeyes began to pull away.

With 8:40 left in the first half, the Wolverines ran through Andrew Dakich at the top of the key. After passing the ball around the perimeter, Dakich fired a deep three-pointer, which missed everything.

Then, Muhammad-Ali Abdur-Rahkman used a Max Bielfeldt screen to get into the paint and collapse the zone, but the freshman guard’s runner was short. (Fortunately for Michigan, Chatman read the play well and was unmarked for a putback.) But the Wolverines wouldn’t be that lucky again. Zak Irvin missed a long three-pointer early in a possession against the 2-3, and then got free for another look with three minutes left but was well off.

Michigan went scoreless over the last seven minutes of the first half as Iowa took a 10-point halftime lead.

Beilein explained that, when facing the 2-3 zone, the person at the top of the key — usually Albrecht — had to be closer to the three-point line in order to open up passes to the free-throw line.

“They played off Spike just enough. He’s got to move in closer, he’s got to look like he’s going to shoot it,” Beilein said. “Caris LeVert was a guy we got in there a lot. He’s a good passer in the zone, or finding people who are cutting into the zone. We missed that today, his vision.”

3) Iowa puts foot down early in second half

Hopes for a second-half comeback ended quickly after the break, as the Hawkeyes used an 11-4 run to pull away after a decisive end to the first half.

Michigan began the second half in a 2-3 zone of its own, which Iowa tore apart. It got the ball inside to Adam Woodbury, forcing the zone to collapse, and the center found Uthoff open for a jumper.

Then, Chatman got caught too high, leaving Aaron White open on the baseline.

The Wolverines switched back to man-to-man but got lost on a rotation, leading to an open corner three. After a steal, Gesell drove and scored on Abdur-Rahkman to stretch the Hawkeyes’ lead to 15 and force Michigan to call timeout.

Beilein later said he wasn’t sure which zone to use because of Iowa’s length and that the Wolverines probably would’ve been better off sticking with man-to-man.

Aubrey Dawkins scored all 16 of his points in the second half, finishing the period 5-of-6 from the floor.

With 9:30 to play, Albrecht faked a shot, which caused Josh Oglesby to step inside and gave Dawkins just enough space to hit a three-pointer. A minute later, Chatman cut to the basket from the top of the key while Max Bielfeldt stepped away from the paint, forcing Aaron White inside and leaving Dawkins open again.

That cut the deficit to nine with eight minutes to play, but Michigan never got any closer.

“They didn’t really shoot the three-ball well until Dawkins got hot,” said Iowa coach Fran McCaffery. “He was tremendous. I love his game, and he really picked them up when they needed it.”

With the Wolverines within single digits, Peter Jok missed a three-pointer and the comeback seemed on. But Chatman went for the rebound with one hand, and it got knocked away and back to the Hawkeyes. As Michigan scrambled to set up its zone, Uthoff got open behind the arc and hit a trey to bump his team’s lead back into double-digits.

Chatman tried to respond with a spinning drive into the lane, but his shot was blocked by a pair of Iowa defenders. The Hawkeyes missed a three-pointer in transition, but the rebound was knocked around before falling to Jok, who kicked out to Mike Gesell for an open midrange jumper.

All of a sudden, a nine-point deficit had been stretched to 14, and the Wolverines didn’t threaten again.