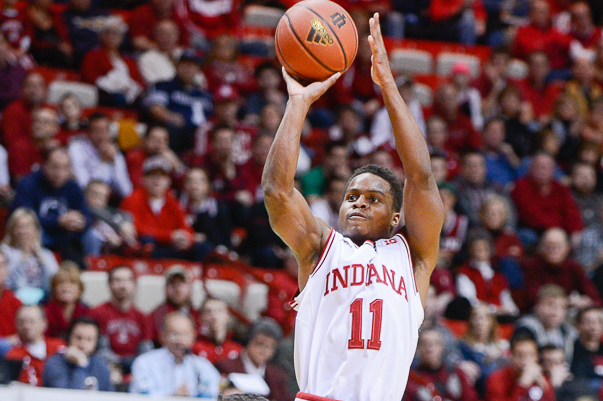 Michigan heads to Assembly Hall on Sunday to face the Indiana Hoosiers. The Wolverines have lost their last five games in Bloomington and will be looking to bounce back from a deflating home loss to Iowa on Thursday. Indiana touts one of the Big Ten’s best offenses and premiere three-point shooting attacks.

Two years ago Michigan and Indiana met at the top of the college basketball world.

The Wolverines walked into Assembly Hall ranked first in the country facing off against No. 3 Indiana. Michigan’s lineup featured five eventual pros – Trey Burke, Tim Hardaway Jr., Nik Stauskas, Glenn Robinson III and Mitch McGary – while the Hoosiers boasted the No. 2 and No. 4 picks in that year’s draft. Indiana won the game in a raucous atmosphere and eventually won the Big Ten before Michigan advanced to the National Championship.

Yogi Ferrell (28 minutes) and Spike Albrecht (4 minutes) were the only players active this weekend to even play in that game. Both programs have seen their ups and downs since that season. Indiana missed the NCAA tournament last year and now Michigan is on the brink of doing the same in 2014-15.

But the Hoosiers have rebounded well in a year where many had head coach Tom Crean on the hot seat before the season started. Indiana is 16-7 and 6-4 in the conference and looks to be in control of its own postseason destiny down the stretch.

Indiana has one of the elite offenses in college basketball. The Hoosiers are scoring 1.11 points per trip in Big Ten games, fourth best in the league, but are ranked sixth nationally in adjusted offensive efficiency for the season. Indiana’s offense is decidedly perimeter-oriented, 38% of its field goal attempts are threes, but it shoots 40.9% on long-range efforts (9th nationally) and a Big Ten-best 39.8% in league games. Five Indiana rotation players are shooting better than 40% from three-point range this year.

While Indiana’s shooting ability is elite, it still lacks size inside. Hanner Mosquera-Perea has missed the last seven games and while he’s reportedly getting closer to a return, his absence leaves a void in the middle of the Hoosier offense and defense. The Hoosiers are shooting just 48.4% on twos in Big Ten games (9th) while allowing Big Ten opponents to shoot 54.9% on two-point attempts, worst in the league by over three percent.

Indiana isn’t great at much of anything defensively and is ranked 244th nationally in adjusted defensive efficiency (for comparison, last year’s maligned Michigan defense was ranked 109th nationally, Beilein’s worst at Michigan). The Hoosiers have been average (ranked 6th in the Big Ten) at cleaning up the defensive glass and preventing free throws, but given their astronomically high shooting percentages allowed, it might be time to start fouling more often.

Indiana junior Kevin Yogi Ferrell is one of the best point guards in the Big Ten. Last year Ferrell was forced to do almost everything, this year he is surrounded by much more capable scorers and shooters. The 6-foot guard is averaging 14.4 points and 4.6 assists per game and is shooting 44% on twos and 37% on threes in Big Ten games. Ferrell is also one of the conference’s best pick-and-roll players.

Freshman guard James Blackmon Jr. deserves to be mentioned as one of the league’s premiere freshmen, right after after D’Angelo Russell and Melo Trimble. Blackmon is shooting 46% on twos and 41% on threes in his freshman year and while he isn’t much of a distributor (8.3 assist rate), he can flat out fill up the scoring column. Blackmon missed Indiana’s last game with an ankle injury, but was a game-time decision on Wednesday and should have had ample time to heal.

Blackmon is flanked on the wings by another freshman who doesn’t get quite as much recognition, but is still very productive. Robert Johnson is a 6-foot-3 guard who shoots 53% on twos and 42% on threes, but has the tendency to turn the ball over more often than his backcourt mates.

Sophomore forward Troy Williams has taken a major step forward after an up-and-down freshman season. His best attributes are still his length and athleticism, but he’s harnessed them into a much more efficient and complete package. Williams is shooting 59% on twos while producing on both backboards and he’s also shown off more ability to handle the ball and attack the basket.

Guard Nick Zeisloft is ‘just a shooter’ as 98 of his 110 field goal attempts this season have been threes, but the 6-foot-4 transfer has made 41% of his long range efforts and is good at what he does. His ShotAnalytics chart tells the full story: Sophomore guard Stanford Robinson is just the opposite. He’s a slasher and driver that is 0 of 9 from long distance and shoots 38% on two-point attempts.

6-foot-6 sophomore Collin Hartman and 6-foot-7 freshman Emmitt Holt have manned the five position with Mosquera-Perea sidelined. Neither player is a true big man, but they can finish around the basket (Hartman is 55% on 2s, Holt is 67% on twos) and Hartman is also a stretch five, making 22 of 42 three-point attempts this season. Defensively, both players are a liability and their lack of size is a major reason for Indiana’s interior defensive struggles.

Michigan fell out of the KenPom Top-100 after Thursday’s loss to Iowa and is an eight-point road underdog according to KenPom’s metrics, which give the Wolverines just a 23% shot at the upset. Assembly Hall has been a house of horrors for Michigan, which has lost its last five games in Bloomington, as even the worst Indiana teams (see: January 2009) have been hard for Michigan to beat.