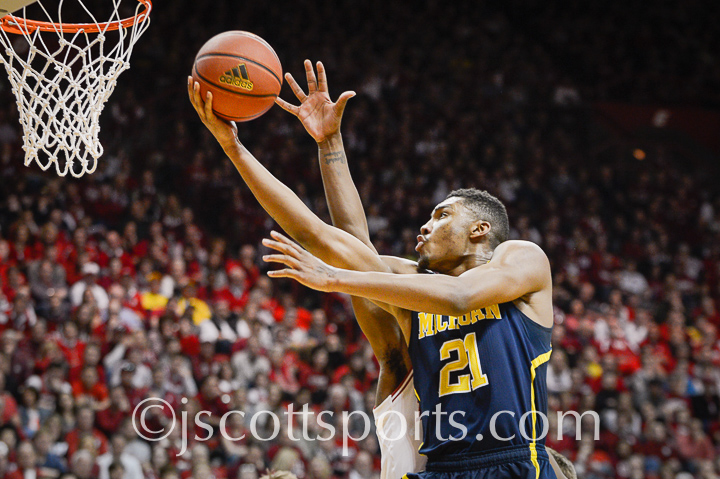 Michigan’s Sunday afternoon at Assembly Hall followed a familiar script. The Wolverines scrapped and clawed through 40 minutes of basketball against a more talented team and then came up just short in the end.

Michigan’s Sunday afternoon at Assembly Hall followed a familiar script. The Wolverines scrapped and clawed through 40 minutes of basketball against a more talented team and then came up just short in the end.

Michigan led only once, 3-2 with 18:48 to play in the first half, but was able to fight its way back within arm’s reach time and again.

Although Indiana made countless runs that looked like they could be the eventual knockout punch, Michigan held steady. Indiana never led by more than 11 points and it was a single possession game multiple times in the second half.

Zak Irvin carried the Wolverine offense, finishing with 23 points, two assists and three steals in 39 minutes, but he had support. Michigan’s big men, Ricky Doyle and Mark Donnal, combined for 22 points on 8 of 9 shooting with 9 rebounds and point guard Spike Albrecht, who tallied 12 points and seven assists including some critical buckets to spark the late comeback.

The Wolverines fell behind by 11 points on two different occasions in the second half, but sit had a shot to tie the game at the buzzer. Muhammad-Ali Abdur-Rahkman’s buzzer-beat clanged off the iron, but he was wide open.

The last offensive possession, which originally was designed to be pick-and-pop action between Zak Irvin and Mark Donnal, went awry after Irvin mishandled the ball on the perimeter. Irvin pushed the ball along to Donnal, who sent it around the horn to Aubrey Dawkins. Dawkins passed up a contested three-point look, a move that Beilein praised, which left Abdur-Rahkman wide open in the corner.

Michigan’s 1.13 points per possession of scoring output was its second-best tally of the Big Ten season — but remember that the Hoosiers have the conference’s worst defense. The Wolverines shot 51% on twos and 46% on threes for a 56.5 effective field goal percentage. Only 28% of their shot attempts were threes, a clear indicator that Michigan went into this game with the purpose of exploiting Indiana’s small front line.

I thought the coaching staff did a great job of dialing up set plays in the second half, many of which resulted in easy layups around the basket, and 57% of Michigan’s made field goals were assisted. That’s a notable improvement over Michigan’s 46.8% assisted field goals rate in Big Ten play.

Defensively, the Wolverines didn’t have any answers for Indiana’s quickness and dribble-drive ability. Yogi Ferrell (18 pts, 6 ast) and James Blackmon Jr. (13 pts) both had big games and were able to get to the rim with ease and when Michigan cut them off, they dropped passes to Troy Williams (20 pts, 6 of 9 shooting) for dunks or fouls along the baseline.

Beilein continued to shuffle through defenses, rotating between 2-3, 1-3-1 and man-to-man defenses. None of the looks worked consistently, but the cadence of switching defenses was enough to keep Indiana just a little bit off balance. That confusion led to some turnover woes as the Hoosiers coughed the ball up on 23.5% of their offensive possessions, resulting in 17 Michigan points.

Even when Michigan could force a miss, it struggled to grab defensive rebounds. The Hoosiers plucked 48% of their misses off the glass and that led to several seemingly back-breaking second chance possessions that plagued Michigan all game.

After encouraging growth on the defensive end during the first half of Big Ten play, Michigan’s defense was peppered this week. The Wolverines traveled to East Lansing with the No. 2 defense in the Big Ten (on a PPP basis) and now are ranked just 9th, surrendering 1.04 points per trip.

Michigan now has three overtime or single possession losses in the last several weeks, but that only masks the fact that the Wolverines have now lost four of their last five games. It won’t get much easier on Thursday as U-M travels to the other Assembly Hall to face an Illinois team that has won three straight including a win at Michigan State.