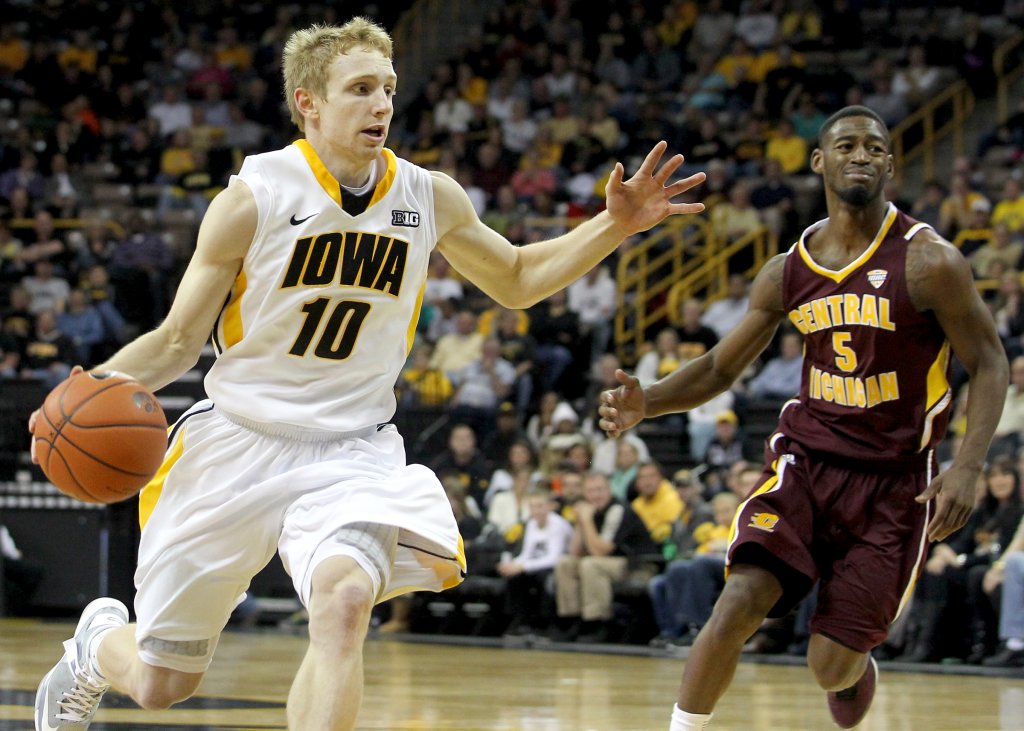 Can Wisconsin take the crown for best offense of the KenPom era? Michigan broke the record twice in the past two seasons. First with an adjusted offensive efficiency of 120.3 in 2012-13 and then at 124.1 last year. Wisconsin stands at 124.8 points per 100 possessions right now and is scoring 1.28 points per trip in Big Ten games, well above Michigan’s 1.17 mark last season.

D’Angelo Russell continues to put his best foot forward for a shot at Big Ten Player of the Year honors. Russell won Big Ten Player of the Week honors for the second time in three weeks and now has six Big Ten Freshman of the Week honors to his name. Russell averaged 21.5 points, nine boards and eight assists per game last week, including a triple-double against Rutgers.

Here’s Russell’s shot chart, via ShotAnalytics, in Big Ten games this season. Russell is among the Big Ten’s best in the middle of the court whether it’s in the mid-range or shooting above the break threes. Much was made about Iowa’s three game losing streak, but most of the league would find itself in a three game losing streak if it played Wisconsin twice in 11 days. The Hawkeyes bounced back from that stretch by drubbing Michigan and Maryland and re-establishing themselves as a top-flight Big Ten team. This week we’re plotting offensive and defensive efficiencies over the season with polynomial trend lines to illustrate different progressions this season.

The major shift for Iowa, other than not playing Wisconsin, has been playing better defense.  The good news going forward is that Iowa has played the league’s most difficult schedule to date and has a 45% or better chance at winning the rest of its games, according to KenPom.

We’ve covered Purdue’s post-up offense in the past, but it continues to be the most productive in the Big Ten. The Boilermakers are scoring more points per game out of post-up situations (shots and passes out of the post) than any Big Ten team since 2009.

Indiana keeps winning games, but still has a negative efficiency margin in conference play. The steady decline in defense continued this week and Indiana’s best hope is that Hanner Mosquera-Perea’s return will provide a boost to the interior defense. If the Hoosiers can make improvements on the offensive side of the ball, they have an improving and elite offense to work with.

Maryland was the darling of the Big Ten a few weeks ago, but has now been outscored in Big Ten games despite its 7-4 record. The Terrapins have regressed on both ends of the floor, but the offense appears to be the biggest concern. Specifically, the Terps can’t seem to win without getting to the free throw line. Maryland is 7-0 in Big Ten play with a free throw rate over 40% and 0-4 with a free throw late below.

Even without Rayvonte Rice and Aaron Cosby, Illinois trending in the right direction. Home wins over Penn State and Rutgers weren’t much to brag about, but a win at Michigan State is a nice chip for a team trying to build its bubble resume. Thursday’s home game against Michigan is a nice chance for revenge before a difficult trip to Madison, WI.

Minnesota is one of just five teams in the Big Ten with a positive efficiency margin. That achievement is just a painful reminder for Gopher fans of just how many close games they’ve lost this season. Minnesota only has one double digit loss in Big Ten play and its other six losses were by a combined 21 points.

Michigan has now lost three games in a row and the culprit for the recent struggles has been the defense. The Wolverines were shredded in the last three games and that trend is obvious on their polynomial trend line.

For most of the Big Ten season, Michigan had been able to maintain an almost even level of play. That was because the Wolverines were able to play strong enough defense to keep games close, generally right around the 1 point per possession mark. But that same defense has let them down. After ranking third in the conference in defensive efficiency, Michigan is now ranked 9th.

John Gasaway praised D.J. Newbill’s play this season in his Tuesday Truths column and why not? Newbill has to do almost everything for the Nittany Lions, using just under a third of their possessions in Big Ten games while maintaining an impressive level of efficiency. It’s a shame that Newbill doesn’t have more help, but it also wouldn’t be a surprise to see him lead one or two more upsets down the final stretch of his career.

Nebraska scored just 13 points in a 31 possession first half at Penn State on Saturday — just .42 points per trip. The Cornhuskers have been held below 1 point per possession in seven of 11 Big Ten games this season, but still have the Big Ten’s second best defense. A similar recipe was good enough to make the NCAA tournament last year, but the Huskers sit at just 5-6 with their final seven games against teams with winning conference records.

The Wildcats have now lost nine straight games and they aren’t losing close any more. Nebraska (16 points) and Wisconsin (15 points) both handled the Wildcats comfortably, only Northwestern’s second and third double-digit conference losses.

The Scarlet Knights turn the ball over more often than anyone in the Big Ten and the worst shooting team in the league. Rutgers is still the only team to beat Wisconsin, but it hasn’t shown anything to move out of the conference’s bottom spot since that day.