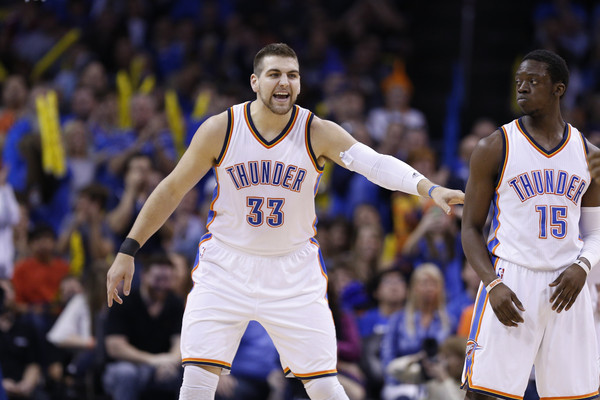 With five Michigan players drafted in the past two seasons, we’ve created the NBA roundup to track their progress throughout the season. Here’s the latest on several Wolverines including highlights of big man Mitch McGary, who tallied back-to-back double-doubles in his first significant playing time of the season.

Mitch McGary’s first season in the NBA has been plagued by injuries, but he finally is getting a chance to play and he’s making the most of it.

The former Wolverine went for back-to-back double-doubles in his first legitimate spurt of playing time this season. First he tallied 19 points and 10 rebounds against the Los Angeles Clippers and then came back with 17 points and 10 boards the next night against the Denver Nuggets.

McGary’s highlights will bring back bittersweet memories for Michigan fans that remember his dominant NCAA tournament performance two years ago.

McGary’s breakout performances came out of nowhere, as he was still with the Thunder’s D-League affiliate on Saturday. It took a lot of work just to get him to Oklahoma City for Sunday’s game:

The Thunder’s rookie forward was suddenly needed in Oklahoma City on Sunday morning to be available for a home game against the Los Angeles Clippers. There was just one problem – McGary was with the Blue in Reno, Nev. Daigneault frantically dialed McGary’s cell phone, but got no answer. McGary was fast asleep, enjoying a long nap after the Blue’s six-hour overnight bus ride after Friday’s game in Bakersfield turned into nine hours due to snow and a detour.

Daigneault tracked down McGary’s hotel room number, finally reached his groggy power forward on the other end and told him he needed to be at the airport immediately. His flight left in 90 minutes. McGary raced to his plane, caught a connection and finally made it back to Oklahoma City at around 10:30 p.m. Saturday night, completing his crazy day of travel.

McGary had only played eight minutes in two previous games this season, but he was ready to make an impact when his name was called.

“You better be ready,” McGary told the Thunder’s website. “You don’t get second chances in this league. When Coach Brooks called my name, I was ready. My nerves were a little shaky, but as soon as I got in there, I was cool. I was just ready to go out there and do what my team needed me to do.”

News swirled in January that the Sacramento Kings were open to trading Nik Stauskas.

Stauskas is averaging just 3.5 points and 1.1 rebounds per game and shooting 26.4% on threes this season. The NBA trade deadline is less than two weeks away.

If he’s not traded, he’ll have to make another adjustment. Getting used to the third head coach of his NBA career. Mike Malone was fired in December and Ty Corbin filled in through the All Star Break. Now reports are that George Karl is set to takeover when the season starts back up.

Tim Hardaway Jr. is averaging 11.1 points, 2 rebounds and 1.7 assists per game for the Knicks this year. New York is having one of the worst seasons in the NBA and Hardaway was recently moved back to the bench after starting several games once the Knicks traded Iman Shumpert and J.R. Smith to Cleveland.

Hardaway admitted losing his fellow wings was tough on him:

I was devastated. To lose one of your brothers, one of the veterans you looked up to getting in the league, it was… [Trails off] To go out there to play with that on your mind 10 to 20 minutes before a game… You’re supposed to have a strong state of mind. We never experienced that in our career.

Knicks blog Posting and Toasting writes that Hardaway’s move to the bench has sparked a renaissance for Tim and the Knicks.

Perhaps it should come as no surprise that this uptick in play coincides precisely with Hardaway being replaced in the starting lineup by Galloway. Tim has struggled most of this season, and was clearly in over his head as the team’s starting shooting guard, particularly during that stretch in early January when Carmelo Anthony and Amar’e Stoudemire were both out with injuries.

Trey Burke was benched for rookie guard Dante Exum in late January and most recently went 0 of 10 from the floor in a 100-96 win over New Orleans.

Burke is averaging 12.5 points and 4.7 assists per game this season, a slight regression from last year’s numbers.

The former All-American will defend his crown in the All-Star Weekend Skills Competition this weekend. Burke will also participant in the Rising Stars Game once again this year. That event has been modified to fit a USA vs. World format which will have Burke competing against two of his teammates, Rudy Gobert and Dante Exum.

Glenn Robinson III has played sparingly this season for the Minnesota Timberwolves. He’s played in 23 games, averaging 1.2 points in 4.1 minutes per game.

The Wolves made a trade for another Big Ten rookie that has barely played this season, former Spartan Adreian Payne. Minnesota gave up a 2017 first round pick for Payne, who only played in three games this season in Atlanta.