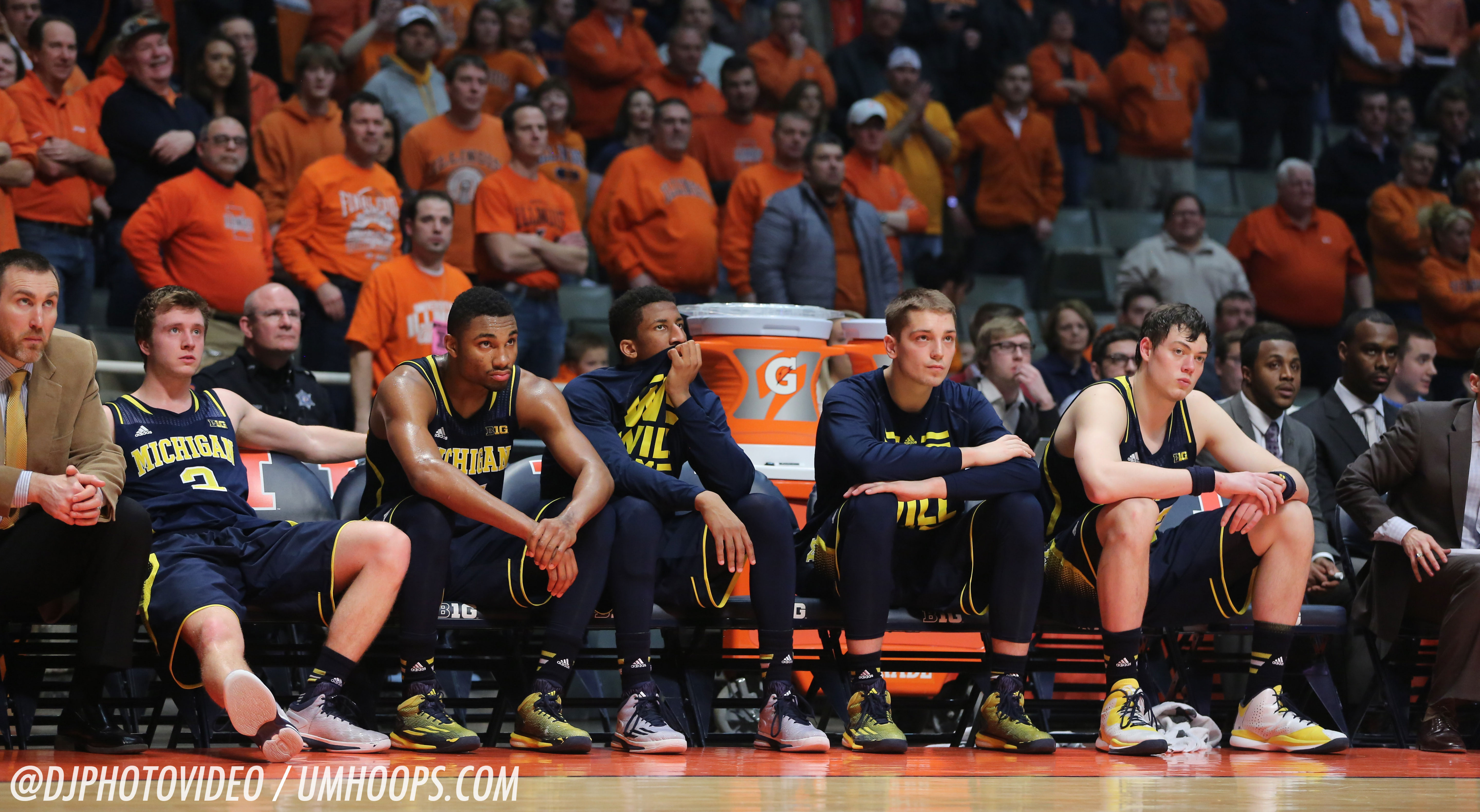 Since Caris LeVert’s injury, Michigan has now lost to Wisconsin, Michigan State and Illinois in overtime and by three at Indiana. But this one hurt just a little bit more. For the first time during that stretch, Michigan wasn’t fighting to comeback and tie the game, it was in control and let the game slip away.

Since Caris LeVert’s injury, Michigan has now lost to Wisconsin, Michigan State and Illinois in overtime and by three at Indiana. But this one hurt just a little bit more.

For the first time during that stretch, Michigan wasn’t fighting to comeback and tie the game, it was in control and let the game slip away.

It was all there for Michigan. The Wolverines finally found led by seven points on the road against a top-50 opponent with under four minutes to play. After three weeks of discussing late game execution, all the Wolverines had to do was make a few plays and make it nine straight against Illinois.

Instead, Michigan tightened up. Illinois scored on its next three possessions and a Spike Albrecht three that might have iced the game rimmed out. Suddenly a 50-43 lead was a tie game and headed to overtime. Again.

The Wolverines were the better team for the first 35 minutes, but playing in front of a record capacity crowd at the State Farm Center — they were sunk. Illinois scored the first 14 points of overtime to extend its run to 21-0 and walked off the floor celebrating a 64-52 victory that kept its NCAA tournament hopes alive.

Michigan, which lost its fifth game in six tries, was left searching for answers once again.

Both offenses were brutal in the first half, but Michigan’s offense actually played fairly well in the second. The Wolverines scored 28 second half points in 26 possessions and managed an eFG% of 58%. Of course, getting outscored 14-2 in a seven possession overtime period is enough to skew every statistic. Instead, Michigan’s .825 points per trip are nestled between the Purdue and Ohio State games as Michigan’s worst offensive performance in Big Ten play.

The Wolverine ball screen game really started clicking in the second half as Illinois was switching screens and Spike Albrecht and Max Bielfeldt were able to exploit mismatches. But Illinois shifted that strategy late in the game which negated the other mismatches and took away any option other than shooting for the ball screen guard.

Defensively Michigan continued to rotate between man-to-man defense, 1-3-1 zone and 2-3 zone. I’m not sure any of them really work great, but I’m also not sure U-M has another choice, but to rotate between them and hope to come up with the right combination. To be fair to Michigan, Illinois was held in check until the final five minutes and overtime.

The 2-3 zone does a few things well and was fairly successful. It protects the rim despite not having any great interior defenders and it provides some rest for guys that are all playing heavy minutes. It’s clear that Michigan’s wings are being told to extend their pressure high when the ball is caught on the wing, but they need to do a better job of recovering to the corner because that three-point shot was open all night.

I’m still not convinced that the 1-3-1 zone does anything other than give up slightly uncomfortable, but open jump shots. Michigan struggles to force turnovers out of the look and it just didn’t work today, especially down the stretch. Man-to-man is always there, but the Wolverines don’t have the horses or experience to play man for  45 minutes.

Any time you lose a seven point lead in the final three minutes, it’s fair to put at least some blame on the coaching staff. Here are a few issues that could fall in that category:

Simply put, Michigan can’t play for overtime. There’s no depth on the roster and Michigan’s bench played just five minutes total in the second half. The depth issue isn’t going anywhere — Michigan brought 10 players to Champaign and eight were on scholarship — but it’s frustrating to see the wheels just fall off when the Wolverines run out of gas.

I don’t know where Michigan goes from here. The fight has been admirable, but it’s hard to shake the image of Spike Albrecht sitting on the bench hiding his face in his jersey. The Wolverines now have the weekend off to prepare for Michigan State, but they might be at a breaking point.Maybe back-to-back home games against their rivals are what the doctor ordered, but at this point it’s just cruel that Michigan hasn’t been able to win one of these nail-biters.