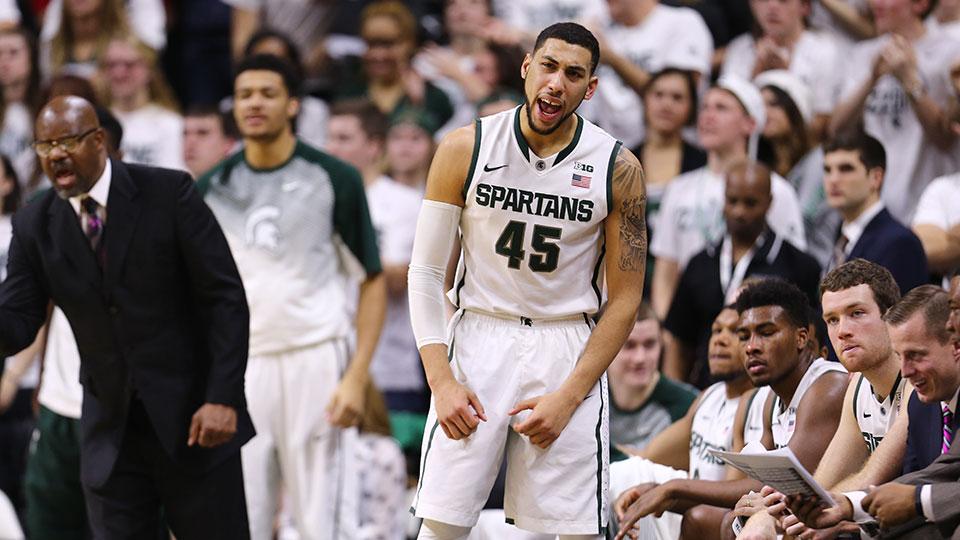 Wisconsin’s offense is playing a different game than the rest of the league. The first blurb in these power rankings usually amounts to thinking of some new way to illustrate the Badgers’ offensive dominance.

Michigan State is probably still a bubble team right now, but earned the second spot in this week’s rankings fair and square. The Spartans have the league’s second best efficiency margin and picked up a critical victory over Ohio State on Saturday. Four of the Spartans’ final six games are on the road, and they’ve played the second easiest schedule in the conference per KenPom, but beating the Buckeyes has the Spartans in second place.

And kudos to Tom Izzo for letting his team run a play without calling a timeout and running some pretty good – non hero ball offense – on the final possession against the Buckeyes.

Ohio State has one of the conference’s two best players, starts three seniors and only has to play Wisconsin once (at home). On paper, the Buckeyes look like the most obvious team to challenge Wisconsin for the Big Ten crown. But for whatever reason, not everything has clicked for Thad Matta’s team. The Buckeyes are just 3-4 away from home, had to suspend Marc Loving, and their best win this season is at home against Maryland.

One thing we do like about the Buckeyes? 6-foot-4 freshman Jae’Sean Tate. Tate leads the league in points scored off of putbacks this season, a ridiculously impressive stat for a 6-foot-4 freshman.

Bo Ryan is an obvious candidate, but you can make a strong case for Matt Painter as Big Ten Coach of the Year. The Boilermakers have now won six of their last seven and look nothing like the team that entered Big Ten play on a three-game losing streak end-capped with a home loss to Gardner Webb.

Purdue’s recipe is unique. The Boilers rely on posting up and lack perimeter shooting (30.2%), but have the conference’s best interior defense (41% two-point shooting allowed). Now if only Matt Painter’s group could start cleaning up the defensive glass at a higher clip.

Maryland won consecutive games this week for the first time since its 5-1 start. It’s hard to name one thing that the Terrapins are great at. They are ranked 10th or worse in eFG%, turnover rate and offensive rebounding percentage and their offense is forced to rely on getting to the free throw line to win games. Defensively, the Terps also check in around the middle of the pack, surrendering 1.01 points per possession.

Other than a home game against Wisconsin, Maryland’s schedule is fairly manageable down the stretch. The Terps play Nebraska twice while hosting Michigan and traveling to Rutgers.

Indiana is one of the more unique teams in the Big Ten because of its small lineup, tempo and perimeter ability. But the Hoosiers also run more dribble hand-offs than anyone in the league other than Rutgers. The dribble handoff game helps put Indiana’s dynamic guards in a position to attack while playing downhill and even if the Hoosiers aren’t the most efficient DHO team, it’s a very important part of their offense.

Illinois’ four-game winning streak ran into the Wisconsin offense and suffered a brutal 19 point loss in a 48 possession game. The Illini aren’t the only team to get blown out by Wisconsin this year and are still playing quality basketball, but if they want to make the NCAA tournament they might need to complete the sweep of Michigan State on Sunday.

Minnesota’s efficiency margin finally fell into the negative range after a blowout loss at Indiana on Sunday night, but that still means the Gophers are ahead of teams like Maryland, Iowa and Illinois. But here’s the catch, the Gophers are also one of a select group of teams that haven’t played Wisconsin yet, something they’ll get to do twice before the season is over.

Is there anything more ‘Iowa’ than blowing out Michigan and Maryland one week and then losing to Minnesota and Northwestern the next?

The Hawkeyes have some great wins this season — Ohio State twice, at UNC, Maryland – but they also continue to be painfully inconsistent. Iowa’s schedule should protect it from the same sort of late-season collapse we saw last year as it still plays Rutgers, @NEB, @PSU and Northwestern again at home, but losing at Northwestern with this sort of roster is a disappointing blow for Fran McCaffery.

Beyond injuries, there are two problems with Michigan. The first is that it hasn’t been able to play good offense all year long, the second is that it lost its defense somewhere near the end of January.

The Wolverines were able to open the season 5-2 because they were winning close games and playing some of the conference’s best defense. Since then, they’ve lost five of six games and the defense has vanished. After surrendering just .98 points per trip to start Big Ten play, Michigan has given up 1.10 points per possession over its last six and that includes its best defensive game of the year against Nebraska’s inept offense. In its five most recent losses, Michigan has given up 351 points in 302 possessions, an appalling 1.16 points per trip.

But we’ve seen Michigan win with bad defense. The bigger issues is that Michigan’s offense just hasn’t been able to get on track. The biggest reason for those struggles? Michigan is just a bad passing team. Spike Albrecht leads the team in assists, but without injured stars Caris LeVert and Derrick Walton, there just aren’t many players comfortable passing the ball.

Nebraska’s first half offensive outputs over the last six games are: 18, 16, 35, 13, 13, and 20 points. This offense seems to reach new levels of futility on a game-by-game basis and now ranks 297th nationally in adjusted offensive efficiency.

Kudos for Pat Chambers for letting his mind be heard on officiating after this horrific call late in the game in State College.

“That was the worst call I’ve ever seen in my entire life,” Chambers said. “They’re pulling Jordan Dickerson down.

“First of all, time and score. [The referee is] too young. He doesn’t have a feel for the game. He shouldn’t call that foul. That’s one. Two is, [Geno Thorpe] back cut it, he went down the middle. He didn’t even use the screen. And [Dickerson] got pulled down, and they call a foul on him?”

The official in question was 31 year old Kelly Pfeifer. Pfeifer is hyped up as one of the up and coming young officials in America in this feature article, but the banker from South Dakota also has limited experience.

He’s been officiating for just three seasons and has called only 165 games, only 14 of which have been Big Ten conference games.

Finally, a win. Northwestern has suffered as much heartbreak as anyone in the Big Ten and finally snapped its 10 game losing streak with a home victory over Iowa. It still took a bit of heartbreak, as the Wildcats allowed a late three-pointer from Jarrod Uthoff before they bounced back for the overtime victory.

The Scarlet Knights will have to win a game to move out of the bottom spot and that could be difficult with a schedule that features home games against Indiana and Maryland and road games at Iowa, Purdue and Michigan.