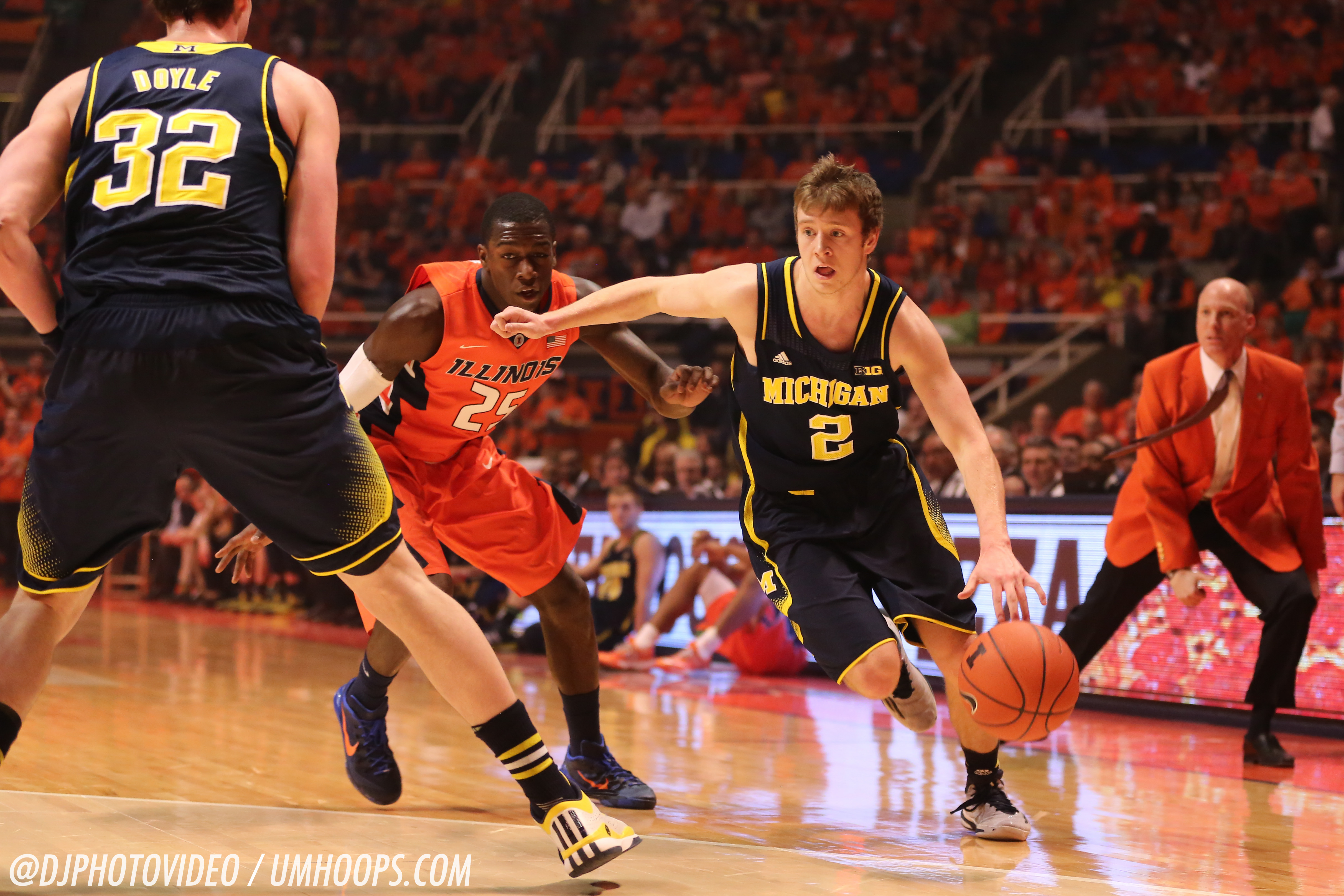 Michigan will hope to improve its transition defense in Tuesday’s rivalry rematch with Michigan State while searching for a solution to stop Michigan State’s Denzel Valentine, who is shooting 49% from long distance of the Spartans’ last four games.

The speed of the game was a little too much for Michigan in its first game this season against Michigan State.

The Spartans scored 16 fast-break points in an eventual 10-point overtime win and found countless other opportunities in unsettled situations.

That has been one of the main focuses for John Beilein as he prepares his Wolverines for Tuesday night’s rivalry matchup. As the coach of a team for which points are precious, he knows getting back on defense quickly after offensive possessions will be crucial.

“You have to run at full speed,” Beilein said, “but you just missed a shot, and you’re underneath the basket because you fell down.

“Very difficult. Their fast break is very good. And that was really a key point in the game [earlier this year]. On defense, we’ll definitely try to slow things down by making sure that they’re looking at five jerseys when they come down the court. That’s the best way to do it.”

In the teams’ first matchup this season, Michigan limited its turnovers well, coughing the ball up on just 15.9% of its possessions. But the Wolverines had a pair of miscues during a scoreless overtime period as the Spartans built a lead.

“Turnovers are killer against them,” Beilein said.

Michigan State also dominated the offensive glass in that game, grabbing 37.1% of its misses. Beilein says those issues have stemmed from Derrick Walton and Caris LeVert’s injuries, as both were reliable rebounding guards.

“You’d like to make up for rebounding by having better possessions offensively and not turning the ball over,” Beilein said. “The ball has to bounce our way. There were several rebounds up at Michigan State where the ball was 20 feet in the air and it was Spike and Dawson going for it at the elbow. We’re not going to win that one.”

Denzel Valentine, the player who dominated Michigan to the tune of 25 points and seven assists earlier this season, almost played college ball in Ann Arbor.

The guard said Monday the Wolverines were one of his finalists, praising Beilein’s recruiting efforts, but he “couldn’t go there.”

Instead, he chose Michigan State, and Beilein pursued — and ultimately landed — Nik Stauskas.

While Stauskas finds his footing in the NBA, though, Valentine is still a Spartan. And the Wolverines will have their hands full with him Tuesday.

“He has the rare combination of, he can really rebound, his three-point shot right now is as high a level as there is in the league, and he really can see the floor,” Beilein said. “A big guard that can really see the floor, that’s Stauskas-like a little bit and Caris-like.

“He’s just a tough, hard-nosed kid who really knows how to play.”

Valentine has been on a roll of late. He hit the game winner against Ohio State and has connected on 17 of 35 three-point attempts during Michigan State’s last four games.

Beilein says rivalry ‘better than ever’

Tuesday’s game might not be between two teams fighting for a Big Ten title, but Beilein insists the occasion hasn’t lost its luster.

“When you feel it, you feel the crowd, you can’t help but see this is really something special,” he said. “Last year’s game here was as loud as I’ve ever heard Crisler Arena. That’s part of the whole thing. There, this year, that game had a lot of juice to it. That was a tremendous basketball game. Two gladiators slugging it out, trying who could put each other away.

The Wolverines won’t have any Michigan natives active, either, but Spike Albrecht doesn’t think that devalues their understanding of the rivalry. The guard said he appreciated its intensity his freshman year, when then No. 4 Michigan lost by 23 to the Spartans in East Lansing.

“They beat us by about 100,” Albrecht said. “I mean, Jesus. The environment, the way the fans got on you from the second you stepped on the court, it was unlike anything I had ever been a part of.”

“I know Derrick would love to be playing this game,” Beilein said.

Walton has missed the Wolverines’ last five games with a foot injury. He had previously been bothered by turf toe.

Last week, Beilein said he and the coaching staff “fully expect” Walton to return before the end of the year.

There will be some familiar faces at the Crisler Center on Tuesday night. Glenn Robinson III and Nik Stauskas both tweeted their intentions to return to Ann Arbor for the rivalry contest.

I’ll be in Ann Arbor tomorrow to see my bros beat up those dudes from East Lansing. Can’t wait to see you guys there! #GoBlue

Back in Ann Arbor for the Michigan vs Michigan State game tomorrow! #GoBlue

Mitch McGary had initially planned to join the duo, but he had to cancel his plans because of practice with the Oklahoma City Thunder early Wednesday morning.