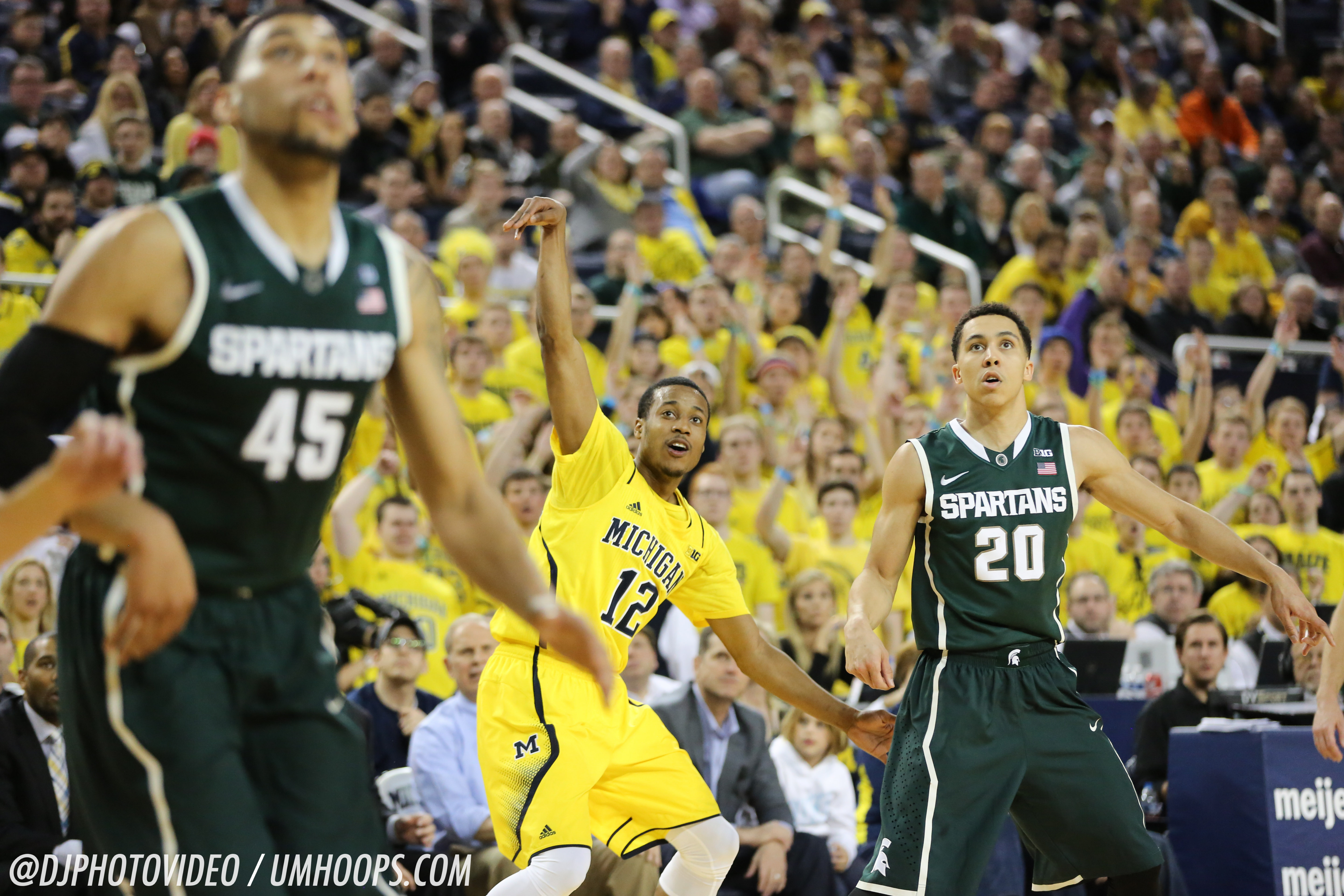 Michigan has shown admirable fight over the last two months, but the injuries, flaws and youth are finally starting to catch up to it. The Wolverines ran headfirst into a buzz-saw on Tuesday night when they met a Michigan State roster that wasn’t just more talented, but loaded with players that had never won a game in Ann Arbor.

The Spartans dominated Michigan in its own gym on Tuesday evening.

Michigan has shown admirable fight over the last two months, but the injuries, flaws and youth are finally starting to catch up to it.

The Wolverines ran headfirst into a buzz-saw on Tuesday night when they met a Michigan State roster that wasn’t just more talented, but loaded with players that had never won a game in Ann Arbor.

The Spartans dominated Michigan in its own gym on Tuesday evening. Michigan State led from wire to wire and held a double-digit lead for the final 31 minutes of play.

The Spartans made four threes during a four minute to stretch their lead to 14 points midway through the first half, but it was their domination at the rim that allowed them to keep the Wolverines at bay.

Seniors Travis Trice (22 points and 7 assists) and Branden Dawson (23 points on 10-12 shooting and 13 rebounds) led the Michigan State charge, but as a team Michigan State shot 78% on twos to rack up a season-high 1.4 points per possession of offense.

I pointed out Michigan’s defensive struggles in this week’s power rankings and the Wolverines were hopeless in defending the Spartans. Michigan State scored 1.4 points per possession for the game, shooting 78% on twos and 33% on threes while rebounding 38% of its misses.

In its last two home games, Michigan has allowed 152 points in 109 possessions — that’s 1.39 points per trip, essentially the worst defense that Michigan has played over the last decade plus, and simply inexcusable at home, regardless of the roster.

Michigan State is one of the nation’s best passing teams and that was clear watching this game. Michigan couldn’t keep MSU’s guards out of the lane which meant that the Wolverine bigs were consistently drawn away from their man to help. Seemingly every time a Michigan State guard had two feet in the paint, the result was a basket for the helping big man’s man — whether it was off of a lob pass, drop-off or easy putback.

Of course, it helped that Branden Dawson could jump over anyone that Michigan could put on the floor. Michigan lacks a true rim-defender, but the much bigger problem is its inability to prevent any dribble penetration. That’s been a problem for the Wolverines all season, but the two best perimeter defenders on the roster were watching this game in matching blue warm-ups on the bench.

I thought the transition defense improved over the course of the game, but that could have been because the Spartans didn’t need to run as often, and because Michigan finally started to make some shots. There were some horrific mistakes defensively in the first half that just didn’t seem to make sense.

“There were two plays, all of a sudden the shot clock is going off and they’re laying it in because guys just went and did something,” John Beilein said after the win. “I can’t explain what we do sometimes when we just leave a guy or two guys guard the same guy.”

I had a really hard time with Beilein choosing to go with the 1-3-1 zone in the second half. Michigan State shredded the 1-3-1 in East Lansing and has it drilled to perfection by now. I can’t remember a 1-3-1 zone possession against Michigan State this year that didn’t result in an open corner three, a layup or a foul. I understand trying to do something because the man-to-man defense wasn’t working, but forcing Michigan State to shoot over a 2-3 zone rather than make layups seemed like the better choice.

Michigan’s offense flat-lined in the first half, managing just .78 points per possession, and let Michigan State run away with a big lead. The Wolverines looked like they were completely taken out of their game and could barely muster a shot. Part of that was the fact that Abdur-Rahkman was on the bench with two fouls (he played just 11 minutes in the first half), but he also didn’t record a field goal attempt while he was on the floor.

We’ve seen the Michigan offense struggle before this season, so that wasn’t really a surprise against the Big Ten’s best defense. What was a surprise was seeing Michigan score 1.51 points per possession in the second half. Abdur-Rahkman took over the game early and Michigan was much more effective and aggressive, especially getting to the free throw line. It was enough to keep up with Michigan State and really should have been enough to get back into the game if the Wolverines could have strung together even a few stops in a row.

Michigan now sits at .500 for the season and in the conference and is looking down the barrel at a game against Ohio State before a trip to Maryland. The losing streak is up to five games and each loss feels more painful than the last.