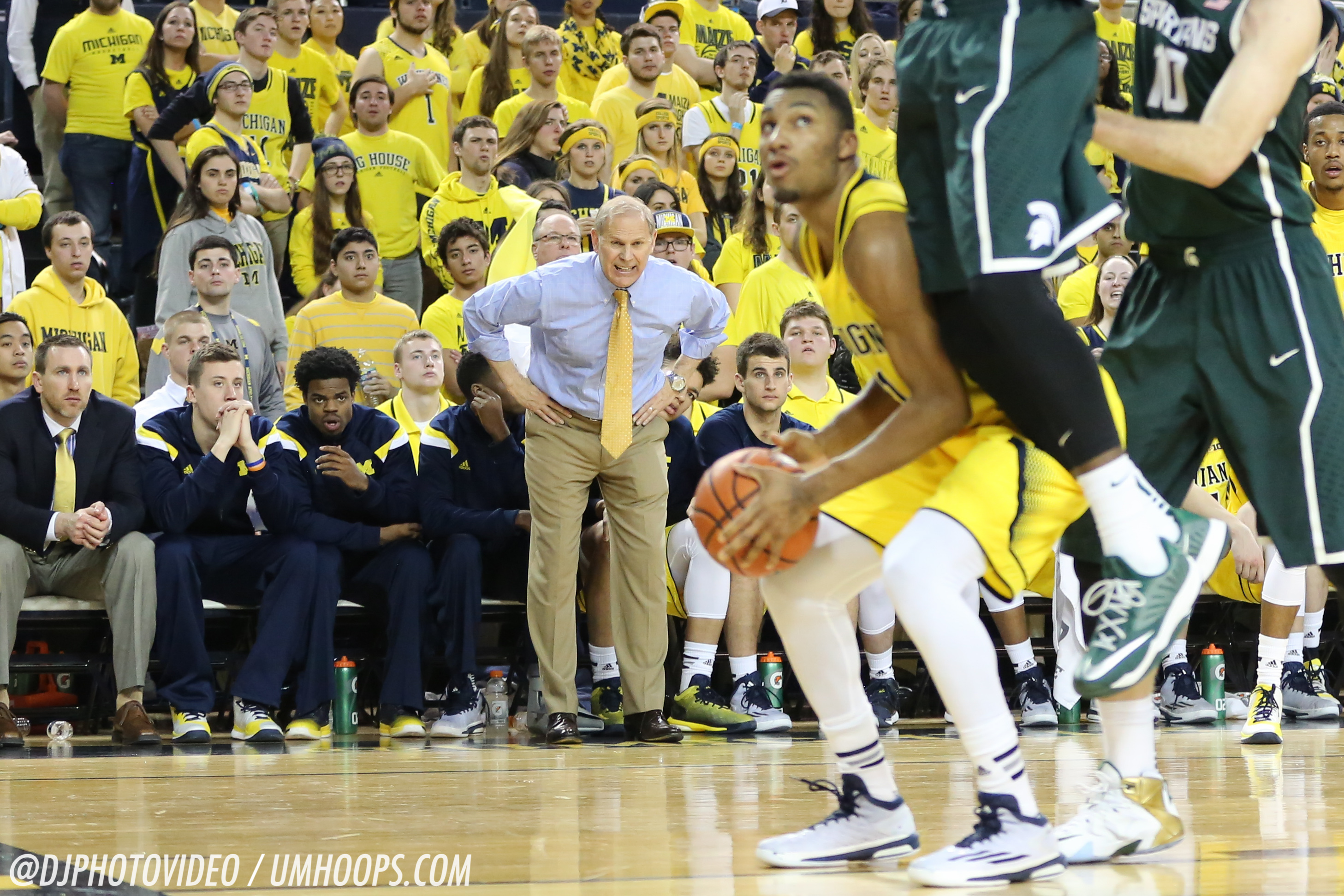 Nik Stauskas, Glenn Robinson III, Jordan Morgan, Caris LeVert and Derrick Walton all started for Michigan against the Spartans on Feb. 23, 2014. They scored 72 of the Wolverines’ 79 points in the win, which moved them into sole possession of first place in the Big Ten. On Tuesday night, they were all watching from the crowd or the bench.

The team that would’ve beaten Michigan State was on the bench and in the stands.

There was Nik Stauskas — he of the 25-point performance against the Spartans at the Crisler Center in 2014 — sitting behind the Maize Rage bleachers. Nearby were Glenn Robinson III and Jordan Morgan, who combined for 19 points the last time Michigan hosted Michigan State.

Hunched at the far end of the Wolverines’ bench were Caris LeVert and Derrick Walton. They had planned to be playing Tuesday night, but injuries had ruined what could’ve been stellar seasons.

Stauskas, Robinson, Morgan, LeVert and Walton all started for Michigan against the Spartans on Feb. 23, 2014. They scored 72 of the Wolverines’ 79 points in the win, which moved them into sole possession of first place in the Big Ten.

Now, two are in the NBA, one plays overseas and the other two can’t walk without crutches or a boot. Meanwhile, the Wolverines have fallen to the bottom half of the conference. And as last year’s stars watched from different vantage points in the Crisler Center, Michigan State dominated on the court that used to be their own.

“I want to steal Dakich’s jersey for a couple minutes and go back out there,” Stauskas said at halftime.

Though Stauskas and Morgan both gave impassioned pregame speeches about the importance of the rivalry, it couldn’t fill the gaps left by their absence on the floor.

No Robinson or Morgan meant Michigan State bullied its way to a 24-point advantage in the paint. Instead of Stauskas, Andrew Dakich got seven minutes in the first half, a period during which Michigan State built a double-digit lead.

While those five starters held their own at the Breslin Center earlier this month, Tuesday’s result seems like what you’d expect from a team with no true depth at the guard or forward positions.

“God bless our guys that come off [the bench],” Beilein said. He understands as much as anybody that a game which features Branden Dawson posting up Dakich isn’t one you’re likely to win.

He also understands a regular-season rivalry sweep could’ve been flipped the other way had LeVert and Walton remained healthy, or had Stauskas and Robinson stayed.

“I’m really happy for them,” the coach said of the duo who left early. “I hope they have incredible, long NBA careers. It’s an opportunity for some freshmen to play early. It wasn’t the plan, but the plans change, and we have to adjust.

In the midst of a five game losing streak and as frustrating of a season as the Wolverines have experienced since 2010, it’s only natural to think about what could have been without the rash of NBA early-departures. But worrying about what could have been also takes away from what was. Michigan’s run over the last three years was impressive, but now Beilein’s only worry is about building a new foundation.

Beilein has often compared this year’s challenges to finding the right pieces to complete a puzzle. Tuesday, as the coach discussed defensive rotations (“I can’t explain what we do sometimes”) and the inability to slow down Michigan State despite limiting Denzel Valentine (“He had six points — they had 80”), he hinted at having run out of time, or options — or both.

But the pieces were all there. They just weren’t at his disposal. And Tuesday’s result was a reminder of just how far the Wolverines have to go.