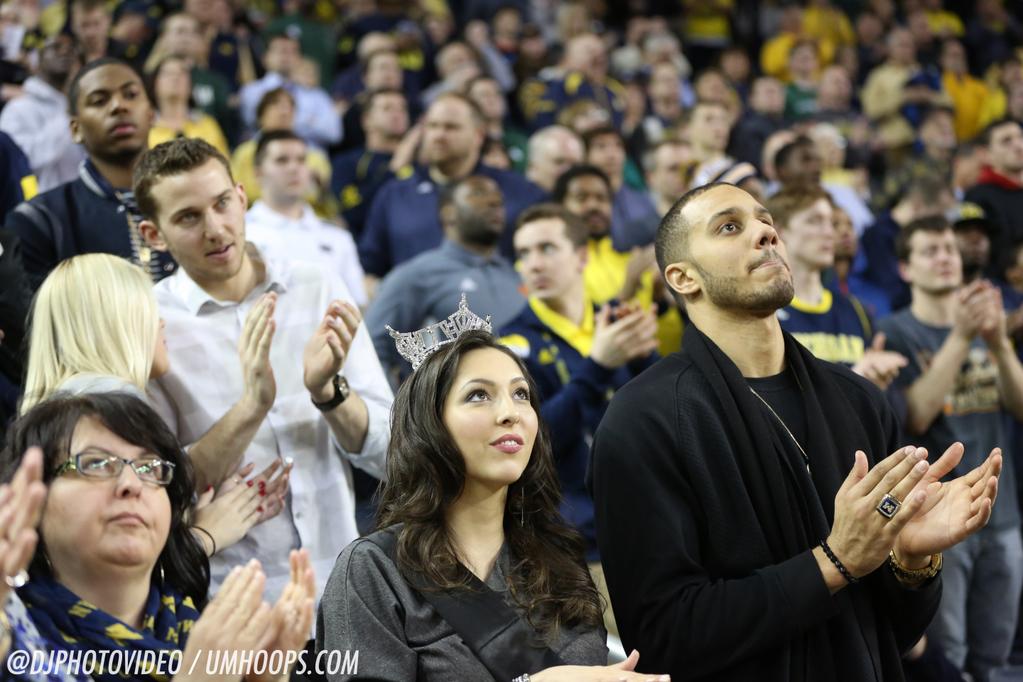 The adjustment to the NBA hasn’t been entirely smooth for Stauskas or Robinson, but the duo remains optimistic for a turnaround. Meanwhile, after some early struggles, Morgan has turned his season around in Italy.

Three of last year’s biggest stars returned to the Crisler Center for Michigan’s game against Michigan State. While the rivalry itself commanded most of the headlines, the trio met with media to discuss their adjustment to the pros.

The adjustment to the NBA hasn’t been entirely smooth for Stauskas, who averages just 3.4 points in 13.6 minutes per game for the Sacramento Kings. Tellingly, he’s shooting just 26.1% from three-point range.

“I haven’t had the type of year that I would hope I would have had,” he said. “But there’s 30 games left in the season — that’s pretty much a full college season. So hopefully I have a chance to turn it around and get my confidence back these next 30 games.

“It’s been humbling, to be honest. With me it’s all about getting my confidence back and getting that swagger back that I used to have at Michigan.”

There was recently yet another major shakeup in the organization when George Karl was introduced as the team’s new coach — the Kings’ third this season.

“I’m excited for it,” Stauskas said. “It’s been a roller coaster ride this year with us. It’s my third coach, and we’re just about halfway through the year. It’s been different for me. I’m used to being here at Michigan, where for two years we had a lot of stability — the same coaches, kind of the same players.”

The shooting guard, who joked he wished he could steal Andrew Dakich’s jersey to take the court against the Spartans, said one of the major differences in the NBA is the lack of a rivalry-type atmosphere.

Last spring, Stauskas took advantage of the “once-in-a-lifetime opportunity” to forgo his final seasons of eligibility to declare for the NBA Draft. With Caris LeVert facing a similar decision in the coming months, the former Wolverine offered his advice.

“Explore all your options, talk to the right people, make a lot of calls,” Stauskas said. “Talk to your family, the ones who you trust most. And then, really follow what feels right for you after that. With a guy who’s as talented as him, there’s no right or wrong decision at that point in time. It’s just whatever you feel is best.”

Robinson looking forward to next year

Robinson has appeared in just two of the Minnesota Timberwolves’ last 10 games, but he remains optimistic about the future.

“Oh, I can’t wait. I can’t wait,” Robinson said. “Next year, we’ll see. We’ll have this talk again. Right now, I’m just staying back, being myself, learning. No doubt in my mind, next year, these questions are going to be answered.”

The forward instructed LeVert “to give me a call” at the end of the season to discuss the decision to go pro or stay in Ann Arbor for another year.

“I know how it is to be in that situation, the pressure that you feel,” Robinson said.

Morgan continues to be a regular starter for Virtus Roma, which are currently 12th in the 16-team Italy Serie A.

The center is averaging 8.5 points and 6.3 rebounds per game overseas.

“There was a little bit in the middle of the season where it was kinda tough,” Morgan said. “It’s a much longer season, and it’s a different game. It’s just different. It was hard adjusting, but you gotta refocus, and when I had the chance to do that, I actually started playing really well.”

Roma also qualified for the knockout stages of the 2014-15 Eurocup, the second-tier European competition between professional teams. Morgan is averaging 9.6 points and 7.2 rebounds per game in Eurocup play.