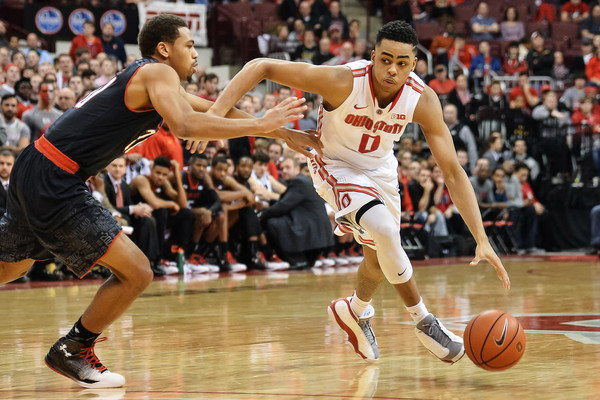 Michigan hosts Ohio State on Sunday afternoon with a chance to avenge its 19 point loss in Columbus – which it suffered despite playing with a complete roster. Now the short-handed Wolverines will hope to find a way to slow down D’Angelo Russell and the Buckeyes and snap their five-game losing streak.

Michigan hosts Ohio State on Sunday afternoon with a chance to avenge its 19 point loss in Columbus – which it suffered despite playing with a complete roster. Now the short-handed Wolverines will hope to find a way to slow down D’Angelo Russell and the Buckeyes and snap their five-game losing streak.

Ohio State hasn’t quite put together the sort of season that one could expect given their freshman superstar and experienced supporting cast, but at 8-5 the Buckeyes still find themselves in the midst of the crowded second-tier of the Big Ten. Ohio State has had a week off to recuperate from a disappointing loss at Michigan State last Saturday and Sunday’s game in Ann Arbor is the start of a manageable stretch leading into a season-finale against Wisconsin at home.

Ohio State is ranked fourth in Big Ten offensive efficiency and third on defense. The Buckeye offense is powered by the two-point shot. Ohio State shoots 52.9% on twos (2nd B1G) and scores 58.1% of its points inside the arc — a higher percentage than any other Big Ten team.  The Buckeyes aren’t a great free throw shooting team, ranked 7th in free throw rate (32.1%) and 3rd to last in free throw percentage (62.7%), and shoot just 34.3% on threes (9th B1G).

Ohio State forces turnovers on a fifth of its opponents possessions in Big Ten play, a mark which ranks second in the conference and fuels the transition offense. The Buckeyes manage to force turnovers without giving up easy baskets. Buckeye opponents are shooting 45.2% (4th) on twos and 33.1% (3rd) on threes for a 46.8 eFG% (3rd). The biggest weakness of the Ohio State defense is on the defensive glass, where it allows its opponents to grab 32.9% of their misses — third worst in the conference.

Thad Matta has always been known for his teams’ great ball screen defenses and while Aaron Craft is gone – the Buckeyes still do a great job defending the pick and roll. Ohio State doesn’t have the best ball screen defense on a per-possession basis, that’s Nebraska, but it only allows opponents to get a shot off of a ball screen (or pass) on less than 16% of their possessions.

If you don’t know the name D’Angelo Russell, you aren’t paying attention. Russell is the only player in the Big Ten that can make an argument to compete for Big Ten Player of the Year honors with Frank Kaminsky and he’s projected as the No. 2 pick in this year’s draft by DraftExpress.  Russell is a good shooter (51% 2pt/40% 3pt/79% FT) and a great passer. He leads the Big Ten with an assist rate of 33% in league play and it’s that vision – both in halfcourt and in transition – that makes him a special player. Russell is one of the Big Ten’s elite ball screen scorers and roughly a third of his offensive possessions are ball screens or passes off of ball screens.

Sophomore wing Marc Loving missed time this season with a suspension for a violation of team rules, but he’s a pure shooter and scorer. The 6-foot-7 wing is shooting 44% on twos and 46% on threes in Big Ten play, making him the only Buckeye other than Russell to have made double-digit threes in Big Ten play.

Seniors Sam Thompson and Shannon Scott form a terrific defensive core. Scott has been one of the conference’s top perimeter defenders for years now. He’s a good distributor, but his shooting numbers have stagnated. The 6-foot-1 guard is shooting 45% on twos and 27% on threes in league play. Thompson is one of the conference’s best leapers and is ranked in the league in both block and steal rate. Thompson had 12 points on 6 of 8 shooting in the first meeting and recorded five steals in 36 minutes.

Jae’Sean Tate has scored more points off of putbacks this season than anyone else in the Big Ten – and he’s a 6-foot-4 guard.

Tate is an elite athlete with an even better motor and he’s recently moved into the starting lineup and is averaging 13.8 points per game over the last six contests for the Buckeyes.

Ohio State has three senior big men, none of which have lived up to expectations. Amir Williams is an above-average rebounder and elite shot blocker that shoots 69% inside the arc. Another Michigan native, Trey McDonald, shoots only 46% on twos and isn’t a great rebounder. Transfer big man Anthony Lee replaced Williams in the starting lineup in late January but has missed the last two games with a groin injury.

6-foot-2 freshman Kam Williams is known as a shooter and has the green light, but he’s shooting just 26% on threes in Big Ten games. Another freshman, and former U-M recruiting target, Keita Bates-Diop, has played limited minutes this season, but is another lengthy forward option off the bench.

It’s tough to muster high expectations for Michigan after losing five in a row and six out of seven. The Buckeyes blew out Michigan in Columbus when the Wolverines had a full roster and KenPom projects a 65-60 Ohio State victory, giving Michigan just a 28% shot at the home upset.