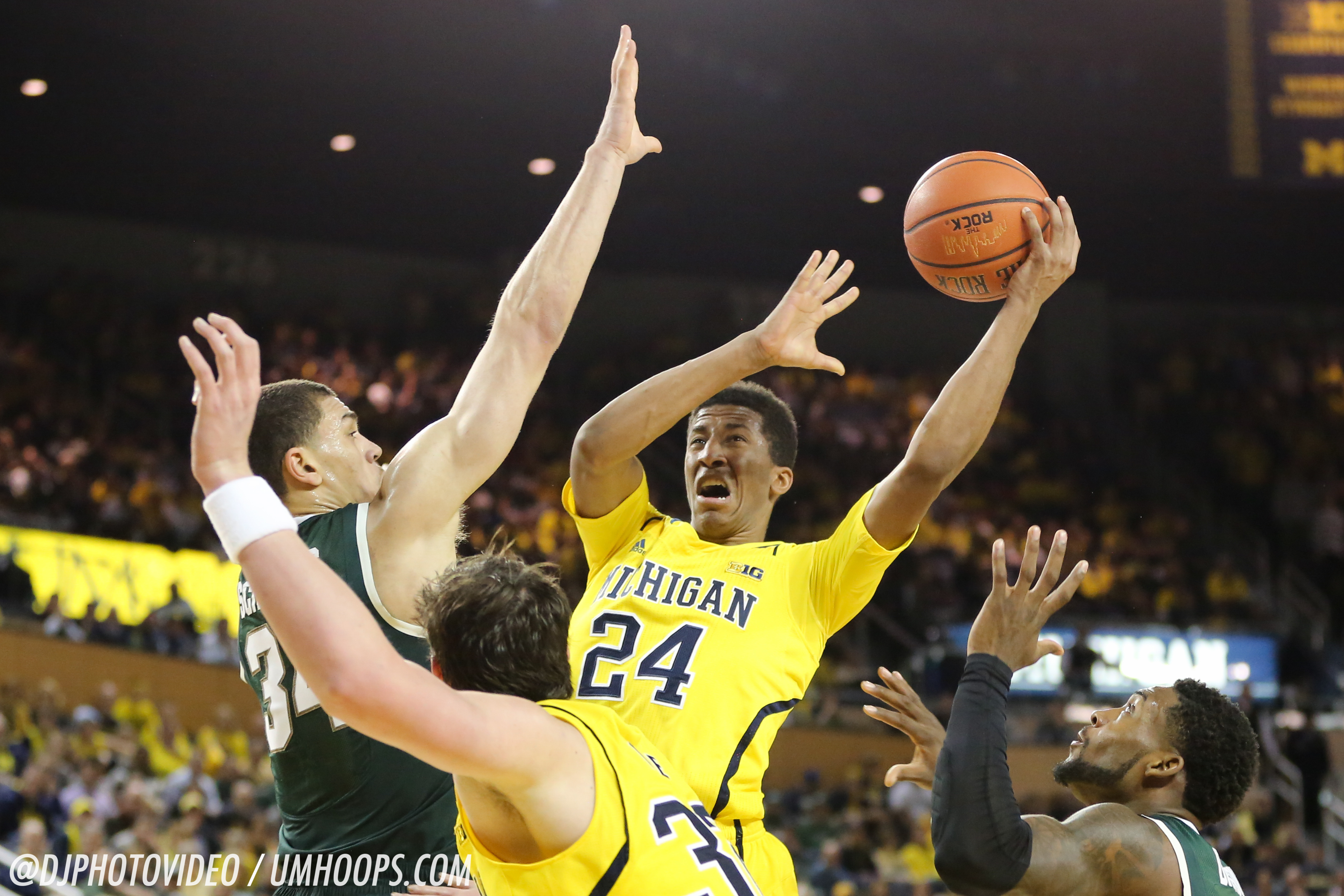 The Michigan basketball team’s last chance for a regular-season rivalry win goes through D’Angelo Russell, the freshman phenom who has become a candidate for Big Ten Player of the Year. Russell scored 21 points with six assists against Michigan in the first meeting. More than a month later, John Beilein might have to face the reality that Russell has improved from that performance.

The Michigan basketball team’s last chance for a regular-season rivalry win goes through D’Angelo Russell, the freshman phenom who has become a candidate for Big Ten Player of the Year.

When the Wolverines faced the Buckeyes in Columbus, the guard scored 21 points with six assists in a blowout victory. More than a month later, John Beilein might have to face the reality that Russell has improved from that performance.

“He was so good against us,” Beilein said. “He was doing things you just can’t teach. Then I watched his game against Northwestern like a week later. He was making some passes and some plays.

“He just sees the game at a different level than most freshmen. Not only is he athletic, he can shoot, but his IQ for the game is exceptional.”

That vision has helped him to a 33% assist rate in conference play, best in the Big Ten. He also shoots 43.1% from three-point range en route to a 19.1 point-per-game average.

The result is a player who can score even if defended properly, according to Beilein.

“I heard Jim Harbaugh say this: It’s tough to compare great to great,” he said. “He’s shown he’s in those categories of [elite] guys. What I like best about him is he’s not just a scorer. He’s an incredible passer, and he’s got good length and speed.

“We usually load up a lot on a player like that, which means we’re going to have one guy on him and then maybe get in the gaps a little more, make him see five jerseys when he’s getting the ball. … When you have that type of talent you can do everything right and he can still put the ball in the basket, and that’s disheartening to teams.”

While Beilein admitted the merit of giving young players more experience, the coach hopes to make an upper-level tournament. If the Wolverines were to miss out on both the NCAA tournament and NIT, they would likely decline other postseason bids.

“If we’re worthy on an NIT tournament, I think that’s something we’ll always consider as long as I’m the coach at Michigan,” Beilein said, “but that, probably, would be it. I think there’s a lot of opportunities to play, but this team has played a lot of minutes. So it’s gotta be the right opportunity.”

While the NIT doesn’t strictly require a team to be above .500, that has generally been a benchmark to earn an at-large bid to the tournament. Michigan is 13-13, meaning it must win three of its last four regular-season games to guarantee finishing the Big Ten tournament above .500.

“That’s not in my thoughts right now,” Beilein said of playing in a tournament below the NIT. “We’ve been to Europe. We have practiced like crazy. We’ve had a lot of opportunities to grow. There’s a certain time you say, ‘OK, the NIT is an NCAA-sponsored tournament.’

“At this point, I’d say we’re going to the NCAA, NIT, or we’ll say we gave it everything we had.”

The Wolverines had a full regular-season slate against their rivals this season, but they’ll face Michigan State and Ohio State once each next year.

“It wouldn’t be our first time,” Beilein said. “My first two years, thank goodness probably, we only played Michigan State once each year. I think we only played Ohio State once last year, so it’s not new to us. Where you’d like to have those rivalries, and you’d certainly want them to be home-and-home, I think it’s very difficult for the schedule makers to have equity and not have those type of round-robins.”

No plans to reclassify Bielfeldt for fifth year

The center has played more than expected this year, but that doesn’t mean Beilein is considering reclassifying Bielfeldt yet again.

“No, there’s no plan,” the coach said when asked if there was a plan in place to revisit Bielfeldt’s eligibility. “Our plan is that he’s really going to practice hard, play the best he can and play in these remaining games that we have. That’s the plan right now. We’ll revisit a lot of things at the end of the year.”