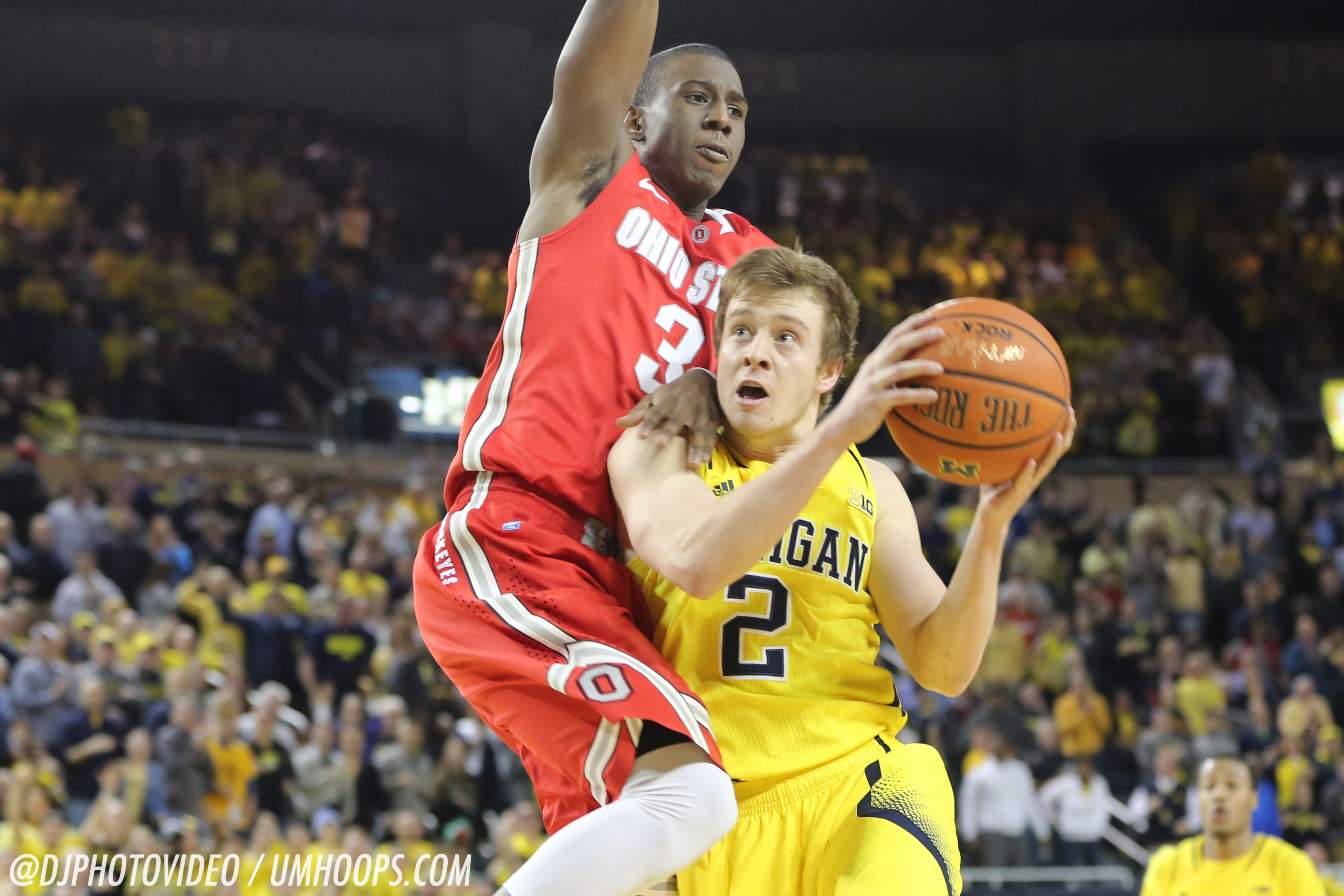 Late in a season that’s been anything but, Michigan played a perfect first half on Sunday afternoon. The Wolverines outscored their rivals to the south 39-23 in the opening period and had positive contributions across the board.

Late in a season that’s been anything but, Michigan played a perfect first half on Sunday afternoon.

The Wolverines outscored their rivals to the south 39-23 in the opening period and had positive contributions across the board.

Zak Irvin played his most complete half of the season – passing, rebounding and defending as well as he shot the ball. The Michigan defense, which was shredded in its last two games at the Crisler Center was active, forcing turnovers and cleaning up the defensive glass. Kameron Chatman – who entered the game on a 1 of 10 shooting streak – checked into the game and made three straight shots on an array of moves driving to the basket. Michigan’s inconsistent big men combined for 12 points and six rebounds in the opening frame and even walk-on guard Andrew Dakich buried a corner three.

There wasn’t much of anything that Michigan could have done better as it nearly doubled up the Buckeyes just a few days after being embarrassed by Michigan State on its home floor.

Michigan couldn’t turn 20 flawless minutes into 40, but while the second half wasn’t nearly as pretty, the Wolverines were just able to hold onto the win. Ohio State managed to cut what was once a 20 point lead down to just three points thanks d a 14-0 Buckeye run midway through the second half.

But unlike in previous games during Michigan’s losing streak, the Wolverines got up off the mat and answered the Buckeye run with a few plays of their own. Zak Irvin hit a critical three to push the Michigan lead back to six points with 6:03 to play and a few minutes later Spike Albrecht stripped D’Angelo Russell at midcourt to ice the game in the final minute.

Albrecht and Irvin were Michigan’s stars, but nine different Wolverines found the score sheet and 13 of 26 Michigan’s made field goals were assisted. The Wolverines scored a sizzling 1.32 points per possession in the first half, but eventually one of Michigan’s patented scoring droughts reared its ugly head. Has there been a game where Michigan didn’t have an extended drought this season? The Wolverines were held scoreless over seven minutes in the second half.

Despite that ugly stretch, Michigan’s offense was still very good on the day. The Wolverines scored 1.08 points per possession, shot 53% on twos and 37% on threes for a 53.6% eFG%. Two-point shooting and assists are two of the stronger barometers for U-M’s offensive success and Michigan passed both tests.

The Wolverine offense made a concerted effort to get the ball to the roll man or cutters to the rim and as a result only 35% of Michigan’s shot attempts were threes. Michigan also valued the ball well against Ohio State’s pressure defense — something that didn’t happen in the first game in Columbus — and the bench scored 18 points in the win.

Defensively, this was also a tale of two halves. The Wolverines rebounded 92% of Ohio State’s misses in the first half (allowing just 2 second chance points) before letting the Buckeyes rebound 57% of their misses in the second for 13 second chance points. But at the end of the day, turnovers were the difference defensively. Ohio State gave the ball away on 24% of its trips and many of the giveaways were unforced.

Michigan went almost entirely with man-to-man defense – I counted three possessions of 2-3 zone and one in the 1-3-1 – and that was a welcome change. The zone defenses didn’t work against Michigan State and Thad Matta is as familiar with Beilein’s 1-3-1 as anyone. Russell didn’t get much easy offense, a major win for U-M, and Michigan did an adequate job stopping the Buckeyes in transition despite a few slip-ups and communication woes in the first half.

This has been a trying season and a trying month, but after slamming their heads against the wall it had to feel good for the Wolverines to finally close out a win. It wasn’t always perfect, but it was also a huge step toward making the NIT and building any sort of positive momentum late in the season. Now the Wolverines have a week off before heading to Maryland on Saturday with a chance for another upset.

Visitors: 2016 offeree Seth Towns and 2017 five-star Brian ‘Tugs’ Bowen highlighted the recruiting visitor list along with Damien Jefferson, Jalen Tate and Ibi Watson. Lions defensive tackle Ndamukong Suh (who happens to be Kam Chatman’s cousin) and Big Sean were some of the notable celebrities in attendance.