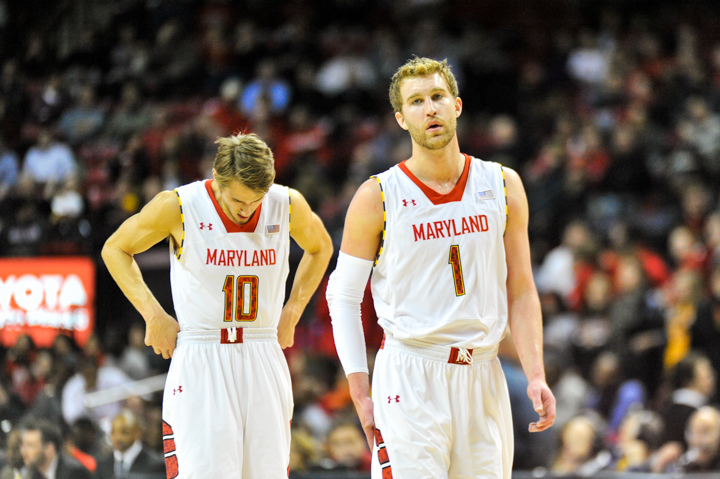 The statistics say that Maryland is one of the luckiest, or most overrated, teams in the Big Ten. The Terrapins are 11-4 in conference games, just 1.5 games back from Wisconsin, but have only outscored Big Ten opponents by .002 points per possession. That means that numbers say the Terps are closer to a .500-level team than a conference contender, despite the eye test and the win-loss record saying something very different.

The statistics say that Maryland is one of the luckiest, or most overrated, teams in the Big Ten. The Terrapins are 11-4 in conference games, just 1.5 games back from Wisconsin, but have only outscored Big Ten opponents by .002 points per possession. That means that the Terps should be closer to a .500-level team than a conference contender, despite the eye test and the win-loss record saying something very different.

Maryland has some impressive wins – sweeping Michigan State and knocking off Wisconsin at home – and has figured out ways to win a number of close games down the stretch. The Terps have also been blown out on the road — 19 points at Indiana, 24 points at Ohio State, 16 points at Indiana – and haven’t won a Big Ten game by double-digits since January 17th.

A little bit of efficiency margin luck can win you a conference championship – a possibility that’s still alive after Maryland’s upset on Tuesday – but it can also send you home early from the NCAA tournament. When fate catches up to the Terrapins is anyone’s guess.

Offensively, the Terps are ranked 9th or worse in three of the four factors. The one thing that Maryland can do better offensively than the average Big Ten team is get to the free throw line. The Terps average 42.3 free throws per 100 field goal attempts, third best in the league.

Maryland isn’t a great shooting team with a 48.4 eFG% (9th), but its shooting struggles come inside the arc. The Terrapins are shooting just 43.8% on twos, meaning they are one of three teams in the league with a lower 2-point shooting percentage than Michigan. They are better from the behind the arc, connecting on 37.1% (3rd) of their long range efforts with 39% of their field goal attempts (3rd) from 3-point range.

This is an offense that wants to make threes or get to the free throw line, but struggles to finish inside without drawing a whistle. The Terps are giving the ball away on 18.3% of their possessions (10th) and aren’t very aggressive on the offensive glass where they rebound just 25.5% of their misses (12th).

Defensively, Maryland is more impressive. The Terps do a great job of not fouling (29.2% FTA/FGA allowed, 2nd) and cleaning up the defensive glass (27.7% OR Rate allowed, 4th). They don’t force many turnovers (17.4 TO Rate, 8th), and are ranked seventh in the league in eFG% allowed at 49.2%. Maryland plays average interior defense, allowing a 2-point field goal percentage of 47.1% (7th), and has struggled against the three, allowing opponents to shoot 35.3% (11th) from long distance.

Freshman guard Melo Trimble is one of the more promising newcomers in the league, averaging 16.3 points per game in conference play. Trimble – who has attempted 100 free throws in Big Ten play to 167 field goals – is one of the best guards in the league at drawing contact and getting to the free throw line. He shoots 44% on twos and 36% on threes, and is much better shooting the ball from deep going to his right. Trimble is the big name, but Dez Wells has put the Terps on his back over the last several games. He went for 26 points in Tuesday’s upset win over Wisconsin and is averaging 19.2 points per game over the last six. Wells attacks the basket well and also has a nice arsenal of pull-up moves and floaters in the lane. He’s only shooting 42% on twos in Big Ten play, but his shot chart illustrates how easily he gets in the lane to score just by the sheer volume of attempts in the paint. He’s also a dangerous three-point shooter (52%) even though only a fifth of his field goal attempts are from long range. Stretch four man Jake Layman is Maryland’s top defensive rebounder and shot blocker. He shoots 46% on twos and 38% on threes with about a two-to-one split. He’s a legitimate outside threat and is capable of putting the ball on the floor and facing up. Layman can create match-up problems as he splits time between the four and five positions. All 6-foot-11, 245 pounds of Damonte Dodd start at the five position. He’s a wide body and a strong rebounder, but his playing time has been a bit limited of late.

Two Big Ten transfers, former Wolverine Evan Smotrycz and former Nittany Lion Jon Graham, play backup minutes in the front court. Graham is a bit like Dodd, strong on both backboards but limited offensively. He also shoots just 46% at the free throw line. Smotrycz’s game hasn’t changed much as half of his field goal attempts are still threes, but he’s only connecting on 41% of his twos and 27% of his threes. Coincidentally, this will be Smotrycz’s senior night at Maryland after leaving Michigan three seasons ago.

6-foot-7 freshman Jared Nickens is the shooter to know. Nickens is making 41% of his threes in Big Ten play and is just 3 of 15 inside the arc with 3 free throw attempts. You simply have to run him off the line and make him beat you in another way. North Carolina A&T transfer Richaud Pack is a Michigan native who recently replaced Nickens in the starting lineup. The 6-foot-4 guard is shooting just 33% on twos and 33% on threes in league play and his top ability offensively is getting to the free throw line.

Maryland is undefeated in Big Ten play when outscoring its opponent at the free throw line this season.

Both teams head into Saturday’s early tip-off on the heels of their best wins of the season. Maryland has a lot more to play for and is still alive in the Big Ten race, even if just barely, while Michigan is scrapping to make the NIT. KenPom projects a 65-57 Maryland win, giving the Wolverines just a 19% chance of upsetting the Terps.