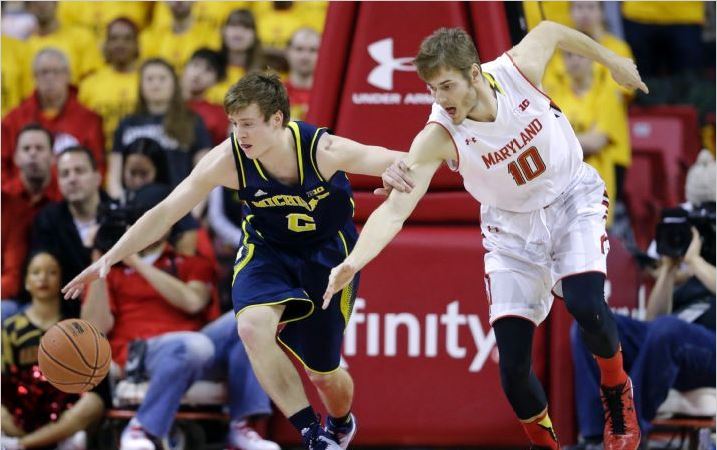 Playing on the road with a shorthanded roster against one of the league’s top teams, Michigan wasn’t going to leave with a win by playing it safe. But this loss came down to John Beilein sticking to a pair of high-risk decisions for just a little bit too long.

Playing on the road with a shorthanded roster against one of the league’s top teams, Michigan wasn’t going to leave with a win by playing it safe. But this loss came down to John Beilein sticking to a pair of high-risk decisions for just a little bit too long.

The first decision wasn’t so much of a gamble, but Beilein simply sticking to one of his core principles. Maryland draws fouls as effectively as anyone in the league and it was inevitable that Beilein’s ‘two foul auto-bench’ strategy would play a critical role in the first half.

Muhammad-Ali Abdur-Rahkman picked up his second foul with 12:27 to play in the first half and Irvin was whistled for his second on a charge with 6:55 to play. The Wolverines led by a point went with a lineup Andrew Dakich, Aubrey Dawkins, Kameron Chatman, Sean Lonergan and Ricky Doyle out of the timeout.

There’s nothing inherently wrong with that decision. Michigan was going to need minutes from those players at some point, there’s no better time to do it than with a modest lead in the first half. And for a while, the decision even paid off. That unit got three consecutive stops and actually managed to extend the lead to three points with 4:57 to play.

Michigan went back with Albrecht after a Maryland timeout, but left its starting wings on the bench with two fouls. Then the foundation started to crack and it’s easy to argue that the next five minutes cost Michigan the game.

After a Maryland three, Albrecht missed an open triple with 2:47 to play and Richaud Pack answered with a three of his own. After another empty possession, Dez Wells scored a putback to stretch the lead to five.

The Terps were on an 8-0 run and the momentum had shifted. Rather than put Irvin or Abdur-Rahkman back into the action, Beilein called a timeout stuck with the same group down the stretch.

“If there’s two minutes in the game, there’s not too many coaches that are going to put anybody with two fouls, so it’s sort of a moot point today,” Beilein said after the game. “If you’re down by 10 in the first half and all of a sudden you get a second foul and you’re down by 15, then you put them in. But in the last couple of minutes, you don’t care which way it’s going to go.”

The Wolverines would turn the ball over three times and miss a three to close the half and went to the locker room trailing by nine. There was nothing wrong with the initial benching, but if there was ever a time to gamble and put someone back into the game it had to be right there.

Michigan spent the second half playing catch up and even managed to cut the lead to three points with 8:40 to play, but could never get over the hump.

That’s because the Wolverines couldn’t string together enough stops, allowing Maryland to score 1.25 points per possession in the final 20 minutes as they stuck with another gamble for too long.

Michigan went into the game with a plan to play 1-3-1 zone against a Maryland team that has struggled with turnovers and it worked early on. The Terrapins looked uncomfortable and sputtered against a Michigan offense that faced some serious matchup issues.But as the game wore on, the Terps figured out the zone. Maryland made 11 of 22 threes on the game, most of which came against the 1-3-1 zone.

There’s no problem with the 1-3-1 zone for stretches, but there comes a time to pull the plug. More man-to-man or 2-3 zone down the stretch might have been worth a try as Melo Trimble sliced through Michigan’s defense and the Terps continued to splash open threes.

Statistically the biggest difference in the game was at the three-point line. Maryland hit 11 of 22 threes and Michigan made just 5 of 21.

Michigan’s offense just couldn’t find something that would work consistently against Maryland’s defense. Even when the Wolverines did find open shots, they weren’t falling.

In the first half, Michigan made a concerted effort to throw the ball into the paint and post-up former Wolverine Evan Smotrycz. Max Bielfeldt and Ricky Doyle both got good position against Smotrycz, but both players also struggled to finish (4 of 13 on twos). In the second half, Zak Irvin put up an admirable effort but there was just not enough consistency on the offensive end for Michigan to make a run.

The stats that we usually look to as barometers for Michigan’s success tell the ugly story: Only 6 of Michigan’s 19 makes were assisted and the Wolverines shot 45% on twos and 24% on threes. Michigan isn’t going to win many games with an offensive performance like that.

Defensively, Michigan played close to a 50-50 mix of man-to-man and 1-3-1 zone with two or three possessions of the 2-3 zone sprinkled in. While Michigan did a good job for spurts, Melo Trimble eventually carved through Michigan’s ball screen defense and the Terps just kept hitting open threes. Michigan has now surrendered over a point per possession in all of its losses, meaning seven times in the last nine games, and is down the 11th in points allowed per possession in conference play.

The loss doesn’t kill Michigan’s NIT hopes, but it makes Tuesday’s trip to Northwestern absolutely critical. That game won’t be a cakewalk as the Wildcats have won four in a row and almost won at Crisler Center against a version of this team that still had Caris LeVert and Derrick Walton.