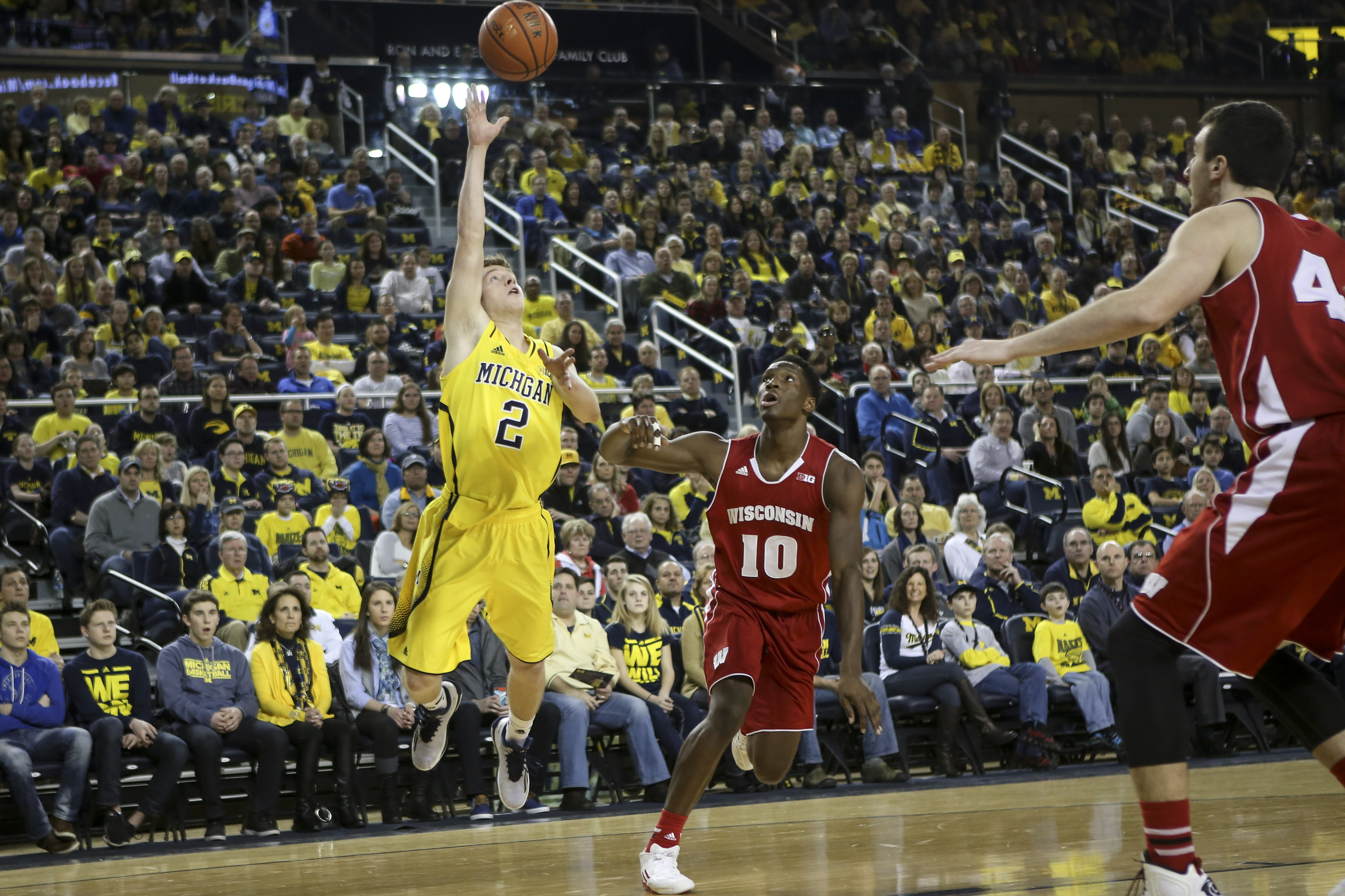 Any Big Ten tournament run is going to a require a big upset or two and Michigan will have a chance to do just that on Friday afternoon against Wisconsin. The Badgers are the class of the conference, outscoring league foes by .21 points per possession – more than twice as much as the league’s next best team.

Any Big Ten tournament run is going to a require a big upset or two and Michigan will have a chance to do just that on Friday afternoon against Wisconsin. The Badgers are the class of the conference, outscoring league foes by .21 points per possession – more than twice as much as the league’s next best team.

Michigan and Wisconsin only faced off once this season, an overtime win for the Badgers in Ann Arbor. Michigan has grown up since then, but beating Wisconsin will still be a tall task. Wisconsin has size advantages on the wings and in the post and Michigan’s defense has struggled for most of the tail half of the season.

The Badgers will also enter Friday’s game on four days of rest, while the Wolverines will have just 22 hours to recover from Thursday’s win. But it’s do or die time for Michigan as it looks to extend its season for another day.

Wisconsin’s offense averaged 1.21 points per possession in Big Ten play, meaning the Badgers average offensive performance in conference play is at a level that Michigan has matched just three times in 31 games this season.

It will probably require a hot-shooting NCAA tournament run, but Wisconsin also has a chance to rival the record for KenPom adjusted offensive efficiency that Michigan set last season. Either way, the Badgers tout the best offense in the country and they haven’t had their point guard since early January.

Wisconsin shoots 54.6% on twos (1st), 35.9% on threes (6th) for a 54.3% eFG% (1st) and gives the ball away on a league-best 11.8% of their possessions. The Badgers are the best shooting team in the Big Ten and by and large they will get a good shot on nearly every possession. Wisconsin isn’t a great offensive rebounding team, grabbing 32% of its misses, and gets to the line 37 times per 100 field goal attempts (4th), but those are small chinks in an otherwise dominant offense.

The Badger defense checks in at third in the conference, allowing a point per possession. Given its offensive dominance, the defense is designed to not beat itself. Wisconsin leads the Big Ten in preventing free throws and defensive rebounding. The Badgers will give up some open shots — Big Ten foes are shooting 36% on threes (11th) and 47% on twos (7th) — but the recipe to beating Wisconsin generally includes making more than your fair share of contested 20-foot jumpers.

Big Ten Player of the Year Frank Kaminsky is likely to add to his trophy case over the next month and he’s a dominant offensive force. He can step out and hit threes (40%), finish inside (62% on twos) and get to the line. But what John Beilein praised about Kaminsky’s game was his ability to pass the ball. Kaminsky leads the Badgers in assists in Big Ten play, making it almost impossible to double team him. Kaminsky is a dominant player in his own right, but Wisconsin has two of the most talented supplemental forwards in the country in Nigel Hayes and Sam Dekker.

Dekker is projected as a first round pick and he’s an elite finisher, but a streaky jump shooter. He’s much better from the right wing than the left, but his danger against Michigan is his ability to get to the basket and finish over Wolverine defenders. Hayes is one of the league’s best mid-range shooters and he’s extended his range out to the three-point line this season. He’s Wisconsin’s four man, but he’s strong enough to overwhelm guards and quick enough to get by big men. Traevon Jackson hasn’t played since Wisconsin’s loss to Rutgers and it’s unlikely that he’ll play in the Big Ten tournament, but Bronson Koenig has filled in admirably. Koenig is a great shooter (40% on threes) and is more than capable of running Wisconsin’s offense. He’s not a great finisher at the basket, but he’s capable of knocking down clutch jumpers. Josh Gasser uses only 11% of Wisconsin’s offensive possessions, but if he shoots the ball it’s probably going in. His offensive rating of 133 points per 100 possessions is fifth best in the country this season. Gasser thrives in the left corner and is also one of the league’s best defenders. Beilein noted that he didn’t know who Gasser would guard, but knew that whoever he matches up with with struggle to get open shots. This is a game that Michigan probably can’t win just by playing its best game. The Wolverines will need Wisconsin to make some mistakes and that just doesn’t happen very often. Ken Pom gives Michigan just a 9% chance of the upset and projects a 66-54 Wisconsin victory.