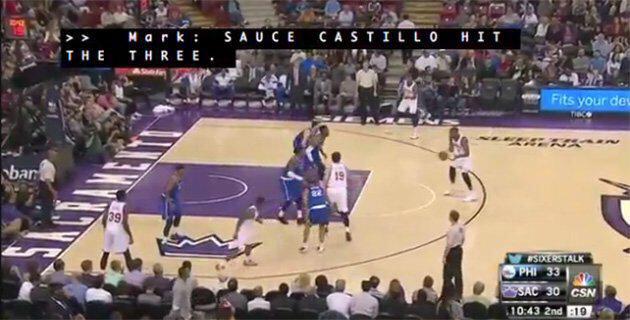 Michigan has more players in the NBA than it has had in quite some time, but many of them haven’t had the best season. Nik Stauskas picked up a trending nickname, Mitch McGary has continued to excel, but Trey Burke has been stuck in a major rut.

Michigan has more players in the NBA than it has had in quite some time, but many of them haven’t had the best season. Nik Stauskas picked up a trending nickname, Mitch McGary has continued to excel, but Trey Burke has been stuck in a major rut.

Since then there have been seemingly endless memes and photoshops portraying the newly minted Sauce Castillo.

On the court, things haven’t always been so fun for Stauskas, but he’s averaging 7.8 points per game in March, his best as a rookie.

He’s still struggling to find a role, adjust to playing on a losing team and playing for so many different coaches coaches. His shot chart still looks nothing like the lights out shooter that Michigan fans saw in Ann Arbor and he’s averaging just 4.3 points and 1.1 rebounds per game. Stauskas has been playing better of late, averaging 8 points per game over the last six games and knocking down 6 of his last 12 threes. Stauskas discussed the struggles of his rookie season with NBA.com.

Mitch McGary missed significant time this season with injuries, but now he’s healthy and he has a role with the Oklahoma City Thunder as they push toward the playoffs. McGary is averaging 16.2 minutes, 7.3 points and 5.4 rebounds per game since stepping into the Thunder rotation in early February.

Here are highlights of McGary from a 14 point, eight rebound performance against Miami this week.

Trey Burke hasn’t found consistency during his sophomore season in the NBA. He was removed from the starting lineup for rookie Dante Exum midway through the season and he recently went 4 of 22 from the floor in a loss to Minnesota.

“I feel like I kind of let my teammates down because I felt like I got some great looks, but I feel like I shot too many 3s,” he said. “If we could have got the ball in the paint more, it would have opened more things up. That starts with the point guard.”

Despite the ugly showing, Burke actually might have improved a bit since his benching, but he’s facing a crossroads soon.

Importantly, he remains an absolute professional, a truly impressive young man as far as the way he’s handled a bevy of issues often directed squarely at him. Trey is likely the most thoughtful and self-aware interview in the Jazz locker room, and is consistently candid in assessing his own struggles. Some might confuse his on-court troubles with a selfish attitude or an unwillingness to learn, but to this eye, this couldn’t be further from the case. His physical tools may not ever lend themselves to a fashionably late upswing, but if such a window ever does open up, this is a guy who’s shown the work ethic to get there.

But the clock continues to tick. Next season will be the second-last where Trey is under his cost-controlled rookie contract, and his current level of play is only subtracting dollar figures from his next deal. If Exum can channel the missing mental side of his game and take some of the steps offensively the Jazz are surely hoping for by next season, Burke could find the minutes distribution tilting even more heavily away from him. He has a long way to go to convince Utah he’s worth retaining beyond his rookie deal as a long-term piece in any capacity.

The next game out after Burke’s woeful 4 of 22 shooting performance, he bounced back with 22 points on 9 of 19 shooting, but suffered a bizarre pinched nerve injury that left him crumpled on the floor.

The former National Player of the Year is averaging 12.8 points and 4.4 assists per game, but he’s struggled from the floor.