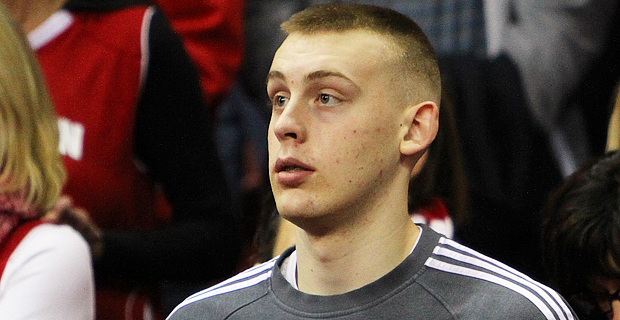 Michigan added its second commitment in the class of 2016 this evening as Onsted, MI big man Austin Davis committed to the Wolverines.

Michigan added its second commitment in the class of 2016 this evening as Onsted, MI big man Austin Davis committed to the Wolverines.

Davis, a 6-foot-10 240 pound big man, averaged 26 points, seven rebounds and five blocks per game as a junior for Onsted, building on averages of 21 points and 15 rebounds per game as a sophomore.

He averaged 12.5 points and seven rebounds per game over the first weekend of the Adidas Uprising circuit. He shot 65% from the floor and blocked six shots in the tournament.

John Beilein had scouted Davis several times throughout the high school season and most recently at the Adidas Uprising session in Dallas last weekend. He offered Davis a scholarship on Thursday, which the big man accepted.

He’s regarded as a three-star prospect by ESPN, Rivals and Scout.

Davis is Michigan’s second commitment in the class of 2016 as he joins fellows big man Jon Teske in the class.

Teske and Davis will arrive in Ann Arbor when Ricky Doyle and Mark Donnal are juniors, which would provide some time for both players to develop behind the older bigs — a luxury that Doyle wasn’t afforded as he was Michigan’s primary starting big man as a true freshman.

The addition of Teske also means that Michigan’s roster continues to be over-weighted in the frontcourt. There will be four traditional centers out of 13 roster spots in 2016-17 along with other fonrtcourt players like DJ Wilson, Moritz Wagner and Kameron Chatman.

From here, Michigan’s recruiting focus has to be on adding perimeter scorers and weapons to the class. The Wolverines have offered several guards and wings including Quentin Goodin, Tyus Battle, Cassius Winston and Josh Langford among others.