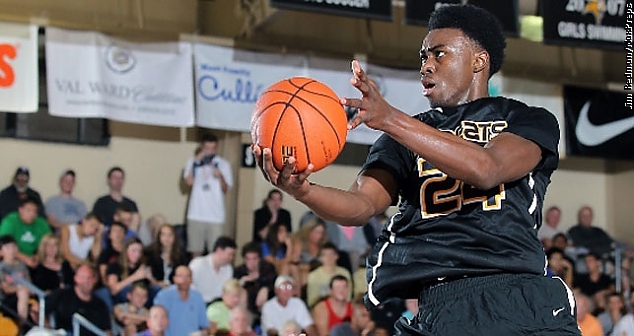 According to a report by Scout.com’s Evan Daniels, Jaylen Brown has trimmed his list to five schools: California, Kansas, Kentucky, Michigan and North Carolina.

Brown eliminated UCLA, Georgia and Georgia Tech from his previous list of eight.

The 6-foot-6 wing is a consensus five-star prospect and he’s visited all five schools remaining on his list. UCLA was considered one of the favorites in Brown’s recruitment according to the 247Sports Crystal Ball, but the last seven predictions have all been made for Michigan.

ESPN’s Paul Biancardi had previously reported that he was hearing that Michigan and Cal could be the favorites in Brown’s recruitment.

“[Jaylen Brown is] the best finisher in the class,” Biancardi said last week. “When he gets in the paint and at the rim you can’t stop him. He can go over you, around you. He has a great second jump and a jumpshot that needs work. Sources close to his family told me it could be Cal or it could be Michigan for his final destination.”

Brown refuted reports that he had trimmed his list at that time.

Brown has not set a formal date to make a decision, but the five-star wing had previously discussed making an April announcement. He’s one of just a few top prospects uncommitted in the class of 2015 including Brandon Ingram (who will announce tonight) and Cheick Diallo.

Michigan now officially has a scholarship available with the news that Austin Hatch is moving to a medical scholarship.