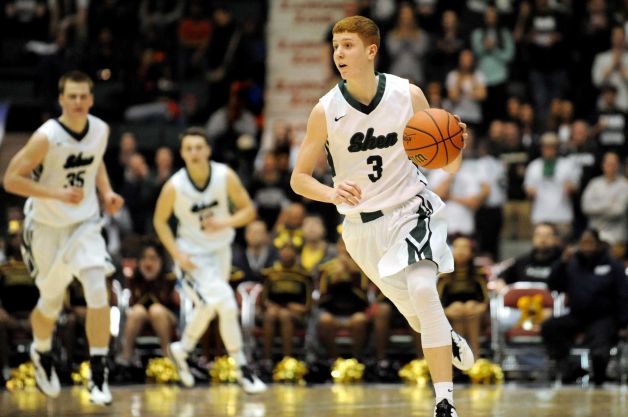 Class of 2016 guard Kevin Huerter is one of the fastest rising prospects in the country and drew a visit from John Beilein this month.

Class of 2016 guard Kevin Huerter is one of the fastest rising prospects in the country.

He seized every opportunity during the two April evaluation periods. The 6-foot-5 guard is averaging 12.4 points, 3.6 assists and 3.6 rebounds through two sessions of the Nike EYBL circuit and, most importantly, his City Rocks team holds an impressive 6-2 record.

Schools have flocked to the versatile guard, who is shooting 40.4% from three-point range this spring, from upstate New York.

Michigan’s interest isn’t quite brand new. The Wolverines have been tracking Huerter for the last several weeks and found out about him during his high school season. He originally appeared on Michigan’s radar when he led his Shenendehowa team to a Class AA State Championship in New York. The junior tallied back-to-back 25 point performances in the state semifinal and state final.

The Wolverines showed interest after that performance and John Beilein made sure to watch him during the first evaluation weekend of the spring. He didn’t disappoint and has earned new offers from across the country.

Huerter admitted that it’s been pretty crazy to answer all of the phone calls over the last few weeks. He hosted six in-home visits since the first session of the Nike EYBL, visiting with coaches from Maryland, Marquette, Villanova, Michigan, Creighton and Davidson.

He added that, as of right now, he’s focused on the six schools that have conducted in-home visits.

“Coach Beilein was there and we had the visit at school, it went well,” Huerter said after scoring 21 points in front of John Beilein on Saturday morning.

“They don’t offer until you get on campus, so he wants to get me on campus first and let me see it and then go from there.”

Huerter said a visit to Michigan is likely in the works although he hasn’t formally set any dates for trips. That opportunity might come now that the spring evaluation period is in the books.

“Early summer, over the next couple of weeks I’ll start to look where I’m taking my visits.”

He will be focused on fit and system. Watching the versatile guard play it’s hard not to see a fit within Michigan’s offense. He can shoot the ball and more importantly is a gifted passer on the perimeter.

Huerter is already familiar with the Michigan and is interested in learning more.

“I know they went to a Final Four a couple of years ago, lost in the National Championship game,” he said. “And I know Coach Beilein has been around a long time so he’s a great coach.”

Despite the sudden acceleration in his recruitment, Huerter made it clear that he’s in no rush to commit any time soon.

“I think sometime next year,” Huerter responded when asked when he might want to make a decision. “I’ll start looking at setting up official visits when I’m a senior. I think I’ll probably make it through the summer (without committing).”